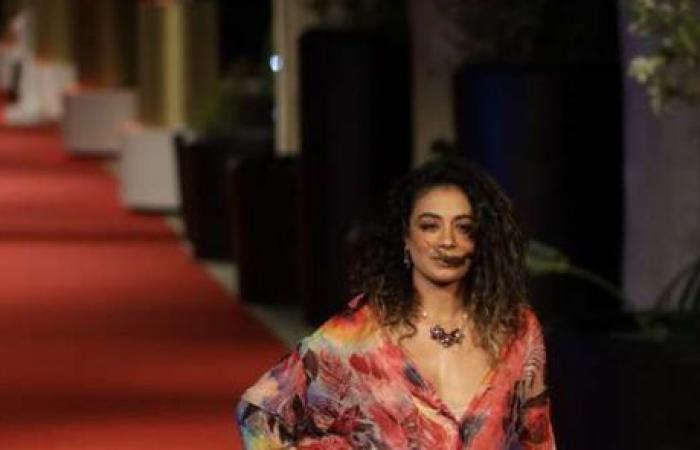 Tunisian actress Sarah Hanachi caught her eye during her participation in the El Gouna Festival in its fourth session, due to her bold “cash mayo” appearance on the red carpet, which exposed her to sharp criticism from the audience.
Sarah appeared in a checkered short dress coordinated with hot jeans, with a look of black clutch with classic nude shoes, and chose the hairstyle of the wavy drop randomly with soft makeup in earthy tones.
The young Tunisian actress continued at the festival the screening of the film “200 meters”, which tells the story of Mustafa and his wife, who came from two Palestinian villages separated by a separation wall, even though the distance between them is only 200 meters, as their unusual living conditions impose a challenge to their marriage, and when their son gets sick, they rush Mustafa to cross the security checkpoint, but he is denied entry, and here the 200-meter journey turns into a frightening Odessa.
The film participated as a project in the starting point of El Gouna in the development stage in the inaugural session of the El Gouna Film Festival, where it won the Mentor Arabia Award for Empowerment of Youth and Children.

The third day of the El Gouna Festival witnessed the screening of a number of distinctive films, namely “Oasis” by Ivan Ickich, “Spring Blossom” by Suzan Lyndon, “Bidaya” for Diaa Columbegashvili, and “Days of Cannibals” by Teboho Edkins.

Also, the activities of the fourth session of the El Gouna Film Bridge began this evening, which includes a lecture by the famous Indian actor Ali Fazal and directed by the artist Bushra, in which he talks about his long creative career, his arrival to Hollywood and his acting with the brightest names of the film industry.
Today, a cooperation protocol was signed between the United Nations High Commissioner for Refugees and the Foundation during a panel discussion at the festival, in which the representative of UNHCR in Egypt, the League of Arab States and the Syrian actress, Kinda Alloush, participated in the virtual participation of the Lebanese director Nadine Labaki.
Sarah Hanachi is a 35-year-old Tunisian actress who has participated in several Tunisian films, including “Child of the Sun” and “Gharib Body.”
On Friday, the fourth session of the El Gouna Film Festival began, amid precautionary measures to preserve the guests, the media and the public, in the presence of a large number of filmmakers in Egypt, the Middle East and the world.
The festival honored 4 names in the world of the film industry, they are the artist Khaled El Sawy and the interior designer Ansi Abu Seif, the Moroccan artist Said Tammawi, and the French artist Gerard Depardieu.

These were the details of the news Sarah Hanashi lights the El Gouna Festival with “cash mayo” on... for this day. We hope that we have succeeded by giving you the full details and information. To follow all our news, you can subscribe to the alerts system or to one of our different systems to provide you with all that is new.