Not in America? Forget about an mmwave 5G handset this... 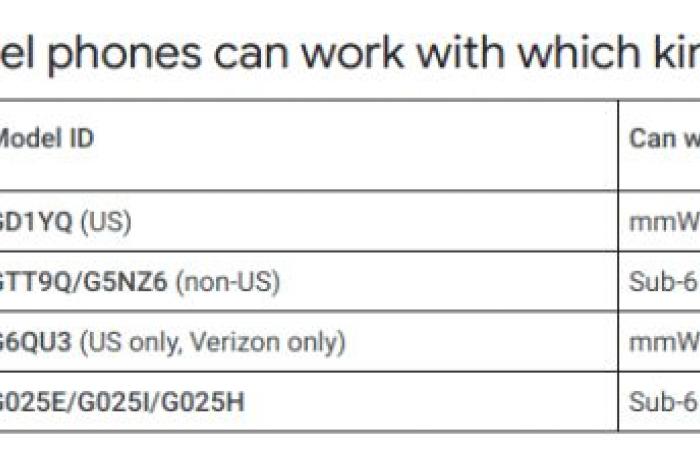 If there’s one thing that 5G doesn’t need, it’s an extra layer of confusion that needs to be added by cell phone manufacturers.

For the layman who has heard of the next-fastest generation of phones – and hopefully doesn’t believe that it is spreading the coronavirus – there is a lot to digest and pitfalls at every turn.

There are different forms of 5G – which are definitely under the 5G umbrella, but do not offer the lightning-fast speeds that the next generation is touted for – and then there is a form that has to be called something like “Full 5G”. that can actually reliably deliver over 1 Gbit / s.

The confusion really started when AT&T decided to label its LTE Advanced network as “5GE”.

Additionally, if John Q Citizen wants a new phone, he needs to know about 5G below 6 GHz. This is the case if you are using 5G protocols in the low and mid-band spectrum, which are also used for LTE, which is still the right 5G but just not the lightning fast type.

Above the lower and middle band is the millimeter wave spectrum (mmWave); The top speeds live here. Recent tests have shown that Verizon’s network in the US is the world leader, only delivering just under 500 Mbps in real tests. The problem with millimeter waves, however, is that the space required for the cover is small. Currently, to take advantage of this, you need to locate a small cell and stand under it.

The other problem with mmWave is that many countries have not yet assigned the spectrum, which brings us back to Mr Citizen looking for a phone. The sad thing is, old John probably saw a telecom advert pushing the new network forward.

If Mr Citizen is lucky enough to be in the US, and a Verizon customer in particular, then he’s on his way to the races – and spotty coverage in 2020 may make that happen anyway.

However, if Mr. Citizen lives outside of the US, it will be more difficult to navigate.

Whether it’s one of the new Samsung S20 devices, the Pixel 5, or one of the new iPhone 12 models for customers outside of the US, 5G most likely means the device will only support sub-6GHz 5G.

While the phone uses 5G protocols, it won’t deliver on all of the promises consumers have been told about. It’s easy to see why cell phone manufacturers are doing this to keep manufacturing costs down a little, especially since some countries haven’t made mmWave available yet, but it’s hardly future proof for the handsets.

It’s almost like buying a twin-turbo car only to find that one of the turbos has blown and the car dealer tells you they made just that this year.

I currently have a Pixel 5 and a Pixel 4a 5G on my desk. After using and enjoying the Pixel 4a a few months ago, I can give the following warning: do not buy these phones internationally for 5G. The 5 has a massive battery and a cheaper price tag than the 4 which might tempt you, but bypass the 4a 5G altogether and head straight for the 4a if that’s the price you are at.

Andy Penn, Telstra CEO, told ZDNet that users who stayed on LTE would see a performance benefit if some people switched to the newer network to reiterate the point that skipping sub-6GHz-5 -G phones for this handset cycle is a good idea.

“They’ll get very good speeds on 5G phones, they’re going to be two to three times faster than 4G phones,” he said.

“What will also happen is that customers who switch to 5G, those early customers will be the early adopters. They’ll usually be large data users and switch to the 5G network – what [has] there are relatively few customers now because it is relatively new – that relieves the 4G network, it only improves the 4G experience, so that all boats rise in this tide. ”

On the subject of future security, Penn said it was a standard problem with technology.

“I think it’s always the dilemma, doesn’t it? In the world of technology, there is always something around the corner that offers a little more functionality and gets a little better when you buy something.

“But people will see a big change if they switch to 5G now, partly because of the handsets. We’re on second generation chipsets now, and also because, in Telstra’s case at least, we’re starting to get to the serious end of “the coverage we offer,” he said.

Another point against the current number of cell phones is that when using the iPhone and Pixel, using a second SIM card will only limit the phone to LTE unless one of the SIM cards is disabled – which is the point of 5G and dual really do nothing. SIMs.

Unless you necessarily want cellular network speeds in excess of 200Mbps and have the change to pay extra for sub-6GHz 5G in a pandemic-triggered recession, the wisest thing to do is skip the handsets, which will be offered in late 2020 wait and see what the next batch has to offer.

And if you’re in America, you’ll love finding the little cells for those super fast downloads.

The Monday Morning Opener is our opening salvo for the week in the technical area. As we operate a global website, this editorial will be published on Monday at 8:00 am AEST in Sydney, Australia. On Sunday at 6:00 p.m. Eastern Time in the United States. It was written by a member of ZDNet’s global editorial team, comprised of our senior editors in Asia, Australia, Europe and North America.

BEFORE ON MONDAY MORNING OPENER:

These were the details of the news Not in America? Forget about an mmwave 5G handset this... for this day. We hope that we have succeeded by giving you the full details and information. To follow all our news, you can subscribe to the alerts system or to one of our different systems to provide you with all that is new.