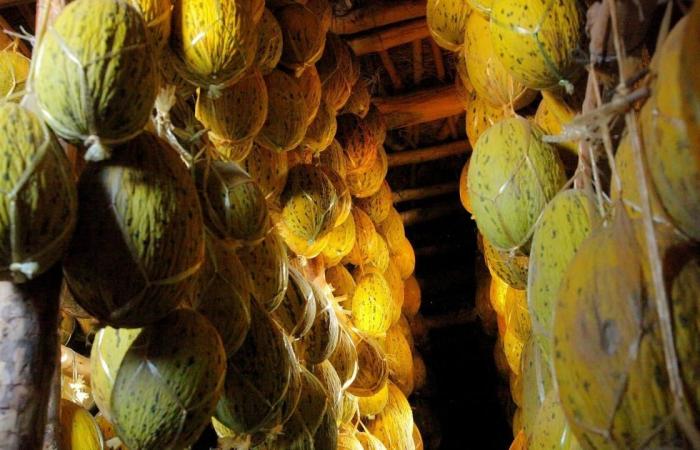 In the huge shed of the Uzbek farmer Sanat Kalandarov, an abundant melon harvest hangs on wooden beams and promises profits in a difficult winter.

Kalandarov practices a centuries-old method of storage – the shed has been in his own family for three generations – and he rejects younger farmers turning to refrigerators.

“Melons need fresh air to breathe,” said 35-year-old Kalandarov, pointing out narrow slits for ventilation in the shed walls, which are thick enough to protect the fruit from the cold of winter and the early spring heat.

“When the days are frosty, we isolate the room. In addition, this method does not require electricity. It is very economical. ”

These thick-skinned varieties of Uzbekistan’s favorite fruits – some shaped like torpedoes, others more spherical – are planted in May, two months after melons ripen in summer.

They are then stored and sold in winter when their value can quintuple on the domestic market and even more abroad.

This year, the melon growing season was especially good and it’s just as good.

The coronavirus pandemic hit Uzbekistan hard, just as it was experiencing an economic upswing.

Remittances from migrants working abroad have halved and weighed on hundreds of thousands of family budgets that depended on them, according to a report released in July by the United Nations Development Program.

Kalandarov, on the other hand, was able to employ 12 people who would otherwise have been unemployed in his village of Vazir in the dry north-west of the country.

He also plans to send his first batch of melons to neighboring Kazakhstan for export by the end of October.

“With Covid-19 and all the unemployment (it caused), those winter melons are a lifeline,” he told AFP, noting that he was able to sell 50 tons of the crop in the off-season.

According to the Ministry of Agriculture, an average of 700,000 tons of melons are grown annually in Uzbekistan on 35,000 hectares of land.

Shohruh Tolibov, an expert from the ministry, said exports are less than 10 percent of that total – some of the sweetest varieties don’t travel well. But they will more than double this year and have quintupled in the last three years.

Such growth was sparked by the agrarian reforms of President Shavkat Mirziyoyev, who dissolved monopoly interests that dominated the export of fruits and vegetables and gave smallholders the opportunity to determine their own customers.

That month, the locally based Jahon Exim Group said it had monitored the first exports of Uzbek melons to the UK.

“We hope that Uzbek melons, known for their taste and health benefits, will be appreciated by local consumers,” the company’s director Jahongir Giyasov said in comments to local media.

Khorezm, a region in the lower reaches of the Amu Darya River that benefits from temperate winters, grows for at least 12 years and they all have one common characteristic – deliciousness.

While other crops fail in the area, “melons grow sweeter on salty land,” said Kalandarov, whose employees had eaten hungrily on some of his produce and the green-skinned bounty like sticky birthday cakes at the end of a long, warm autumn day.

Kalandarov grew up in the melon fields and has been growing his own fruit since he was young.

But he is no longer satisfied with this work alone. Instead, his dream is the same as the stated policy of the national government to move from selling raw materials to products with added value.

“I have a business plan. I want to develop new products – melon jam, canned melons, dried melons. There is a great demand for these products in foreign markets, ”he told AFP.

These were the details of the news Harvesting puddle melons sweetens Uzbekistan’s pandemic problems for this day. We hope that we have succeeded by giving you the full details and information. To follow all our news, you can subscribe to the alerts system or to one of our different systems to provide you with all that is new.