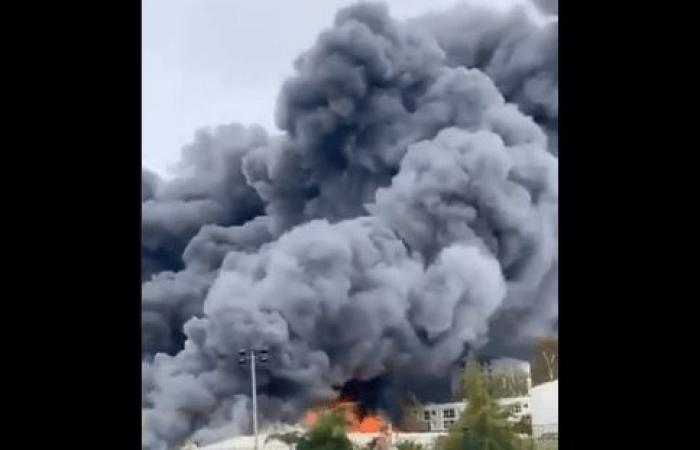 A huge fire that occurred yesterday in the port of Le Havre in northern France topped the Arab search list on Google, coinciding with an expanded electronic campaign against France and the demand to boycott its products, after insulting the Prophet of Islam, Muhammad.

The angry activists also shared the news of the fire on social media platforms as well as video clips, all of which were attached to Bossoum condemning France, after its president, Emmanuel Macron, insisted on publishing cartoons offensive to Islam, such as (#France) And(#except God’s messenger) And(Boycott of French products) And(Macron offends the Prophet), Plus hashtag (#fire_France).

On Saturday, police and local media sites said that a large fire broke out in an abandoned building in the northern French port city of Le Havre, sending thick clouds of black smoke into the air.

In a statement on Twitter, the police said that houses had been evacuated in the Port District of Le Havre. And the civil defense published video clips from the scene of the fire.

Radio Tendance Ouest reported on its Twitter account that the fire had started in an old Lipton warehouse.

Activists on social media also shared footage confirming the rise of columns of condensed smoke above the building.

Le Havre is located in the mouth of the Seine and is one of the largest port cities in France.

Macron had expressed his insistence on publishing cartoons insulting to Islam, “in support of secular values,” as he put it. He stressed in a televised speech that his country would not abandon the satirical cartoons of the Prophet Muhammad.

This came in an interview about the 47-year-old French teacher, Samuel Patty, who was killed on October 16 after publishing insulting pictures of the Prophet Muhammad on some of his students in a school northwest of the capital, Paris.

The French president said, “We will continue, teacher, we will defend the freedom that you teach, and we will carry the banner of secularism high,” according to Agence France-Presse.

France is witnessing recently, controversy over the statements of a large section of politicians, targeting Islam and Muslims, following the incident of killing a teacher and beheading him.

In recent days, pressure and raids have increased, targeting Islamic civil society organizations in France, due to the incident.

The French magazine “Charlie Hebdo” had published 12 cartoons insulting to the Prophet Muhammad, in 2006, which unleashed a wave of anger throughout the Islamic world, which are the same cartoons that Patti presented to his students before his death.

These were the details of the news Burned in hours … France fire tops Google Arabia (video) for this day. We hope that we have succeeded by giving you the full details and information. To follow all our news, you can subscribe to the alerts system or to one of our different systems to provide you with all that is new.