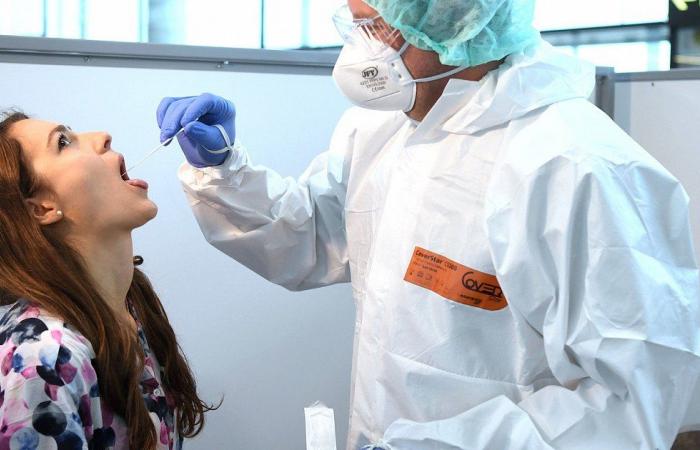 It is a new high: On Saturday with 3614 new SARS-CoV-2 infections within 24 hours in Austria, an immense increase of over 1,000 compared to the previous day with 2,571 was reported. As a result, the number of active cases also reached a high of 20,273, as shown by the figures from the Ministry of the Interior and the Ministry of Health (as of 9:30 a.m.).

There are currently 1,177 people in hospital treatment due to the corona virus, which is an increase of more than 100 people – 175 of the sick are in intensive care units.

In the federal state of Salzburg alone, the number of patients to be treated in hospital has more than doubled in just one week. As of Saturday, 74 people were cared for in normal wards and eleven in intensive care units. In comparison, seven days earlier there were 34 who received normal hospital care and 11 who needed intensive care.

In the case of Vorarlberg, increasing numbers of corona cases also led to a contact tracing debate, the waves of which smoothed out again on Saturday afternoon.

Health Minister Rudolf Anschober (Greens) sees the follow-up and segregation of the close contacts after corona infections in Vorarlberg still secured. In a broadcast on Saturday, Anschober rated the contact tracing restriction reported by the state the day before as a “misunderstanding”. Because only the direct questioning of K1 and K2 contact persons going beyond the regulations will be reduced.

AGES epidemiologist Daniela Schmid previously emphasized in the Ö1-Mittagsjournal that reducing contact tracing was not an option. The follow-up of the contact persons is based on evidence the most effective measure against the spread of SARS-CoV-2. Human resources would also be available. Anyone who gives up contact tracing gives up control of the epidemic, said Schmid on Friday at the press conference on the traffic light switching. A survey by the APA in the federal states also showed that the tracking of the contact persons would become more difficult, but that this would continue to be carried out.

Because of the increasing numbers, Slovenia will put all of Austria on the “red list” of countries with a high risk of corona infections, with the exception of Carinthia. The Slovenian government decided on Friday evening, as the STA news agency reported on Saturday. Accordingly, when entering Slovenia you will have to present a negative Covid-19 test that is not older than 48 hours or you will have to go into ten-day quarantine.

New highs also in the USA

The number of new corona infections worldwide is increasing and increasing. More negative records are reported every day. In the USA, the number of new infections rose to more than 80,000 within one day for the first time since the beginning of the pandemic. The Johns Hopkins University (JHU) recorded 83,757 new cases there on Friday (local time), around 12,000 more than the day before. Ten days before the US elections, the wave of infections has reached a new high.

US President Donald Trump has downplayed the dangers of the virus despite the record number of new corona infections. “I had it, here I am,” announced Trump, alluding to his Covid 19 disease, during an election campaign appearance in Lumberton on Saturday. “And now they say I’m immune.”

In Europe, too, the values ​​are rising steeply. Belgium, which in relation to the number of inhabitants is one of the countries hardest hit by the pandemic, also registered a new high this week with 15,432 infections within one day. The situation in the Czech Republic is even worse.

According to JHU, almost 8.5 million coronavirus infections have been confirmed in the USA, with a total of around 330 million inhabitants, since the beginning of the pandemic. Around 224,000 people have died so far – more than in any other country in the world. The situation is little better in India with 7.8 million infected people and around 118,000 dead and Brazil with 5.3 million infected people and more than 156,000 dead.

In the EU, France and Spain have negative records with more than one million infected people and over 34,000 deaths each. There were even more deaths in Europe in Great Britain (44,600) and Italy (at least 37,000). Europe (including Russia) is the second region in the world to have more than 250,000 corona deaths after Latin America. That is a share of 19 percent of the approximately 1.1 million deaths registered globally, according to a Reuters survey based on official data. Spain has the highest death rate. The number of proven virus infections in Europe is now eight million. That is around a fifth of all infections worldwide.

In relation to the number of inhabitants, the pandemic is particularly violent in Belgium and the Czech Republic. Belgium has only 11.5 million inhabitants and still registers higher numbers of new infections than Germany with around 83 million people. On Saturday, the EU epidemic authority ECDC reported 1,115.6 new infections per 100,000 inhabitants within 14 days for Belgium. According to Belga, the trend is steeply upwards: On average, the state health institute Sciensano registered 11,201 new infections in the seven days from October 14 to 20, 56 percent more than the week before. Guesthouses and restaurants in the country are closed, there is a night curfew and strict contact restrictions.

In the Czech Republic with just under 10.7 million inhabitants, the situation is no better: On Saturday, ECDC reported 1,210.8 new infections per 100,000 inhabitants within 14 days. The health authorities in the country reported the previous record increase with 15,252 new cases within 24 hours.

In Poland, President Andrzej Duda tested positive for the corona virus. His spokesman, Blazej Spychalski, said on Twitter on Saturday that the 48-year-old president was feeling good. “We are in constant contact with the health service,” wrote Spychalski. Poland reported a new high on Friday with 13,600 new corona infections within 24 hours. Stricter measures have been in place in the country since Saturday. Among other things, restaurants there are now closed and gatherings with more than five people are prohibited.

Other European states are now also taking drastic measures: In France, a night curfew has been in effect since Saturday in 54 departments and the overseas territory of French Polynesia. 46 million people are affected – two thirds of the population. On Saturday there was another record in France with 45,422 new infections within 24 hours.

The Spanish Corona hotspot Madrid has been “closed at night” between midnight and 6 a.m. since Saturday. During this time, public gatherings and private meetings with non-household people are prohibited. In Spain, in view of the rapidly increasing corona numbers, there are signs of a return to the state of alert as during the first wave of pandemics in spring.

Most of the shops, hotels, kindergartens, dormitories, hairdressers and beauty salons in Slovenia are closing. In Latvia, only a maximum of ten people are allowed to come together for events in rooms.

There were protests in Italy. In the southern Italian metropolis of Naples, hundreds of people took to the streets on Saturday night against a curfew and a planned lockdown for the Campania region. There were two arrests and two police officers were slightly injured. The capital city administration in Rome announced the evening closing of popular meeting places on weekends in order to avoid crowds: central places should remain closed on Friday and Saturday from 9 p.m. to midnight.

The government in Wales received massive criticism with a ban on the sale of a number of goods in supermarkets. As part of a temporary lockdown, the markets are only allowed to sell “essential goods” – even devices such as kettles or textiles such as upholstery and sheets, but also postcards or dishes are locked in the shops with plastic sheeting or other barriers.

In Turkey, the mayor of the metropolis of Istanbul, Ekrem Imamoglu, was infected with the corona virus. As the 50-year-old opposition politician announced on Saturday via Twitter, he went to hospital on Friday evening with a high fever.

In Ukraine, ex-boxing world champion Vitali Klitschko contracted the corona virus before his possible re-election as mayor in the capital Kiev. The 49-year-old announced this on Saturday evening in several social networks. “Friends! The corona virus struck at the most inopportune moment,” he said with a view to election Sunday. “I feel good.”

Although he tried to protect himself, working as mayor in times of pandemics also means a constant risk. He had been tested regularly and will now continue to work from self-isolation, said Klitschko. (apa)

These were the details of the news 3,614 new infections – another negative record in Austria for this day. We hope that we have succeeded by giving you the full details and information. To follow all our news, you can subscribe to the alerts system or to one of our different systems to provide you with all that is new.