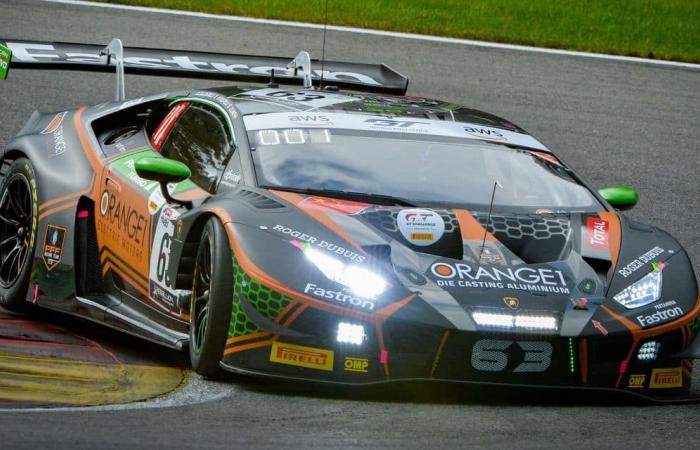 The main race fact was the collision in the Brussels corner at around 7 p.m. between two favorites for the scratch victory: the Audi R8 n ° 32 WRT driven at that time by Charles Weerts and the BMW M6 n ° 34 Walkenhorst by Nick Catsburg. If the behemoth was able to set off again after a long repair at the box, the racing car with the rings stopped there, the rear-right wheel being twisted. At 8 p.m. sharp, the other BMW of Walkenhorst Motorsport, the n ° 35 of Pittard-Yelloly-Tomczyk, hit the wall with tires in Les Combes. If the white coupe managed to leave without too much damage, there will be no 24th victory for the Bavarian manufacturer this year.

Five brands are in the first five places, separated only ten seconds what is more! The Orange1 Team FFF Lamborghini Huracan n ° 63 gained momentum over the laps to finally take the lead at sunset. Marco Mapelli, Andrea Caldarelli and Dennis Lind are 7 seconds ahead of the Mercedes-AMG GT3 n ° 88 AKKA-ASP, the poleman Raffaele Marciello having had a festival at the start of the race. The star coupe, now driven by Felipe Fraga, is harassed from all sides by the Porsche 911 GT3-R n ° 47 KCMG of Estre-Lietz-Christensen. Once again, Kevin Estre was bluffing during his stint by turning faster than everyone else.

With the # 32 out, Dries Vanthoor’s # 32 Audi R8 is in fourth place and is now the only Team WRT mount that can claim victory on a regular basis. Behind the Ferrari 488 n ° 51 AF Corse of Calado-Pier Guidi-Nielsen, Fred Vervisch and his teammates Drudi and Niederhauser are 6th. The n ° 98 ROWE Racing Porsche 911 GT3-R on which we find Laurens Vanthoor has started its comeback and is 12th. Top 15 for the Bentley Continental n ° 3 K-PAX of Maxime Soulet and his friends.

In Pro-Am, quite clear leadership of the Lamborghini Huracan n ° 77 of Mitchell-Collard-Collard-Machitski which precedes the Ferrari 488 n ° 93 Tempesta of Hui-Frogatt-Fisichella-Cheever and the Aston Martin Vantage n ° 188 Garage59 of Maxime Martin and his comrades. Despite a drive through for not respecting the limits of the track, the BMW M6 n ° 10 Boutsen Ginion of Lessennes-Klingmann-Ojjeh-Vannelet remains at the foot of the provisional podium.

The # 918 Herberth Motorsport Porsche 911 GT3-R of Seefried-Häring-Joos-Konstantinou leads in the Am Cup ahead of the # 129 Lamborghini Huracan Raton Racing of Petit-Lenz-Constantini-Mauron. The n ° 26 Saintéloc Racing Audi R8 of Grégory Paisse and Pierre-Yves Paque, and the n ° 108 CMR Bentley Continental of Stéphane Lémeret follow at one and two laps.

These were the details of the news 24H Spa (H + 4): BMW already out for victory, Lamborghini... for this day. We hope that we have succeeded by giving you the full details and information. To follow all our news, you can subscribe to the alerts system or to one of our different systems to provide you with all that is new.