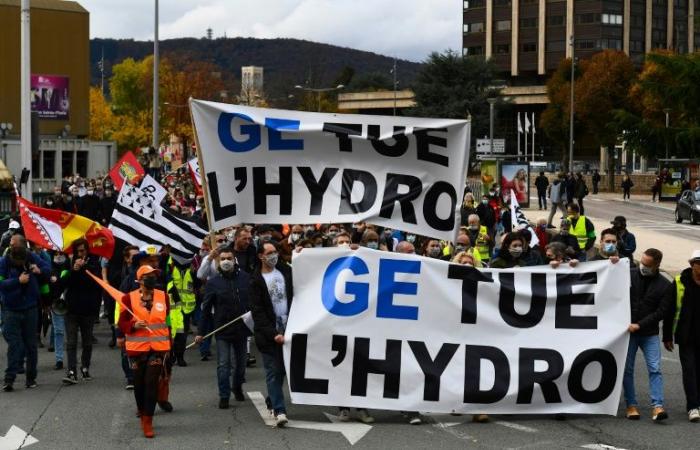 Nearly a thousand demonstrators gathered on Saturday in the center of Belfort to demand state intervention in the face of the restructuring project announced by General Electric, which notably provides for the end of activities linked to hydroelectric power in the city.

The American group, which bought the Energy branch of Alstom in 2014, announced in September its intention to restructure two divisions in Europe: the “Hydro” branch, located in particular in Belfort and which produces dam equipment, and the “Grids Solutions” activity of electrical networks.

The project raises fears of the elimination of 753 jobs in France, including 89 in Belfort. Under a huge banner calling for the preservation of “energy independence” and “industrial sovereignty” of France, Philippe Petitcolin, CFE-CGC union delegate, called on the government and denounced the group’s “inadmissible” strategy, transforming Belfort into ” economic ghetto “.

“Today, GE wants to close the hydroelectric entity of Belfort, the renewable energy par excellence, which can be stored with the dams”, he lamented.

“But Belfort is also the ability to install power plants of all types, gas, coal, nuclear, renewable. If we continue like this, tomorrow it will be the Chinese, Indians, Turks, who will maintain our park “of power plants, he warned.

In front of the People’s House, the interventions of the union representatives were applauded by the many elected officials present, of all tendencies, including the mayor (LR) of the city, Damien Meslot.

“The stake is national, it is necessary to know if one wants an industrial policy or not in this country”, estimated the elected official with AFP. “We are asking that a consortium around EDF buy back the energy part of Alstom which was sold to General Electric, because we can see that General Electric is going to dismantle everything”.

“The state must intervene,” he insisted.

A position shared by Marie-Guite Dufay, president (PS) of the Bourgogne-Franche-Comté region.

“My responsibility is to do everything to ensure that this skill, this industrial know-how remains, and not to negotiate as best as possible so that there are the fewest jobs that disappear”, she declared. . “The state needs to get out of the woods and say how it sees the industrial future in Belfort, with or without General Electric”.

The procession then set in motion in the direction of the prefecture, to the sound of a fanfare and behind banners “GE kills hydro”. Another addressed an ironic “thank you” to Jérôme Pécresse, the general manager of the renewable energy branch of the group and husband of Valérie Pécresse, president (Libres!) Of the Ile-de-France region.

In the crowd, employees of other companies and many locals lent their support to the employees of General Electric.

“It is important for the employment area that all employees are present,” said Laurent Oechsel, central union delegate CFE-CGC for the PSA group, who came from Sochaux, about twenty kilometers away. “If General Electric leaves, it creates a big imbalance in the region, especially for suppliers and subcontractors.”

Laura Jumenez, she came with her companion, and her 2-year-old son in the stroller. “It is an issue that concerns the whole city,” assures the 30-something, who works for Social Security. “The difficulties of companies, it also impacts the whole system of solidarity behind, it is not an isolated problem”.

These were the details of the news in Belfort, employees, elected officials and residents demand state intervention for this day. We hope that we have succeeded by giving you the full details and information. To follow all our news, you can subscribe to the alerts system or to one of our different systems to provide you with all that is new.