Erdogan: Macron needs psychological treatment, and I do not know his... 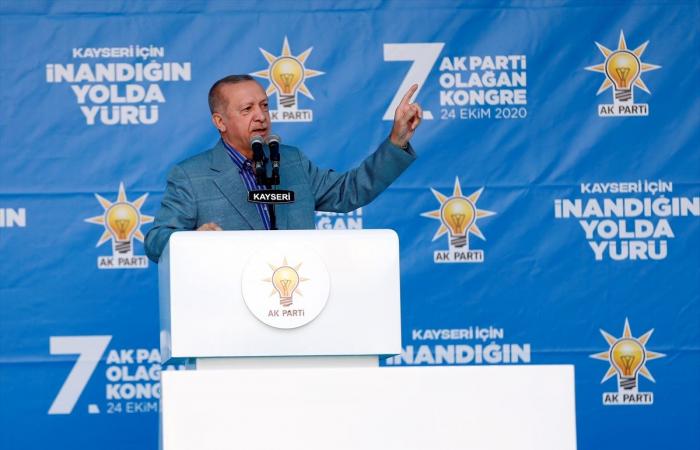 Turkish President Recep Tayyip Erdogan attacked his French counterpart Emmanuel Macron today, Saturday, against the background of his insult to the Prophet Muhammad and Islam, saying that the French President needs psychological treatment.

Erdogan said Macron needed to test his mental faculties, adding that he did not know about Macron’s problem with Islam.

Erdogan’s statements came in a speech during a conference of the ruling Justice and Development Party, in the state of Kayseri, in the center of the country.

Erdogan added that publishing the cartoons insulting to the Prophet Muhammad in France is an offense to all Muslims.

The Turkish president said that the attacks on Muslims in Europe showed the fascism of a continent that committed the largest massacre in history.

Erdogan expressed his concern about what he said was the growing hostility against Islam and Muslims in Europe.

The Turkish president said that his country respects the Christian communities and other religions on its soil, adding that this respect stems from the teachings of the Islamic religion.

On Wednesday, Macron said in a press statement that his country will not give up on confronting the “cartoons” offensive to the Prophet Muhammad and posted on the facades of buildings in several French cities, including Toulouse and Montpellier.

During recent days, the pressure and the raids increased, targeting Islamic civil society organizations in France, against the background of the killing of a history teacher named Samuel Bate (47 years) who showed his students the offensive pictures, in a suburb of Paris.

The French President described the killing of Bate as undermining freedom of expression and an “Islamic terrorist attack”.

His speech was widely rejected in Islamic countries, and his statements were described as incitement to hatred.

Macron announced, early this month, that France must confront what he called “Islamic isolationism,” claiming that it seeks to “establish a parallel system” and “deny the republic.”

And the French Interior Minister Gerald Darmanan had previously stated, Sunday 27 September, that his country was fighting a war against what he called “Islamic terrorism”, in his statements during a visit to a synagogue near the capital, Paris.

On Wednesday, July 16, French Prime Minister Jean Castex said that “combating Islamic extremism” is one of his “major concerns”, during his announcement to the National Assembly of his government’s general policy statement.

These were the details of the news Erdogan: Macron needs psychological treatment, and I do not know his... for this day. We hope that we have succeeded by giving you the full details and information. To follow all our news, you can subscribe to the alerts system or to one of our different systems to provide you with all that is new.