Welcome, anger and rejection … a domestic and external division regarding... 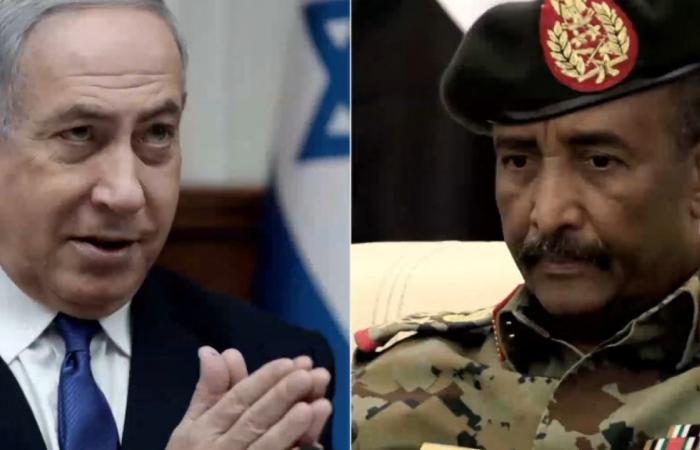 Internally and externally, the decision to normalize relations between Israel and Sudan provoked mixed reactions, as some considered it a historical event that would bring stability and prosperity to the country, while others saw it as weakness and weakness, and a break with Sudan’s constants and history in supporting the Palestinian people.

After weeks of leaks, rumors and visits, US President Donald Trump announced that the leaders of Israel and Sudan had agreed to normalize relations between them.

To motivate Khartoum to take this step, the US President announced that he had removed Sudan from the list of countries sponsoring terrorism, after the Sudanese paid $ 335 million to the families of the victims of the attacks that targeted US facilities in Africa.

In a tripartite statement, the leaders of Israel, America and Sudan have agreed to start economic and trade relations between Sudan and Israel, with an initial focus on agriculture, and that America will take steps to restore Sudan’s sovereign immunity, and work with international partners to ease its debt burden.

With this decision, Sudan officially entered the list of countries of normalization with Israel after a long historical hostility since its independence in 1956.

The Sudanese Foreign Minister-designate Omar Qamar al-Din announced that the transitional government agreed to normalize relations with Israel, explaining that ratifying the decision remains within the competence of legislative bodies, according to the official news agency.

The transitional authority’s decision put the Sovereignty Council and the transitional government in a confrontation with political parties within the Forces of Freedom and Change (the ruling coalition), as well as opposition parties, while entities and parties from within and outside the coalition expressed their welcome to relations with Israel.

Treason has no legitimacy
Opponents of normalization assert that this decision is not based on any legitimacy, as it was issued by a transitional government, not an elected one, and was not subject to a vote by parliament.

The National Consensus Alliance announced its rejection of normalization with Israel, and its most prominent party is the Communist Party and the Arab Socialist and Nasserite Baath.

The coalition said in a statement, “We reject any normalization with the Zionist entity, and we reject any decision on normalization made without authorization from an elected legislative council, especially in light of the complete absence of the people and their living forces.”

The Sudanese Communist Party – one of the most prominent coalition parties – relies on its stance of rejection of normalization with Israel on “solidarity with peoples who are subjected to oppression and persecution, and struggle for freedom and democracy.”

And confirms his rejection of any agreement with Israel until the Palestinians obtain a just solution to their cause.

The national Umma Party also rejected normalization with Israel, claiming that “the authorities of the transitional period have no right to decide on the major controversial issues that are at the core of the work of the elected governments.”

In protest against the move, the party’s leader, Sadiq al-Mahdi, announced his withdrawal from participating in the international conference “Renewal between Origin and Age,” which is being held by the Sudanese Ministry of Religious Affairs and Endowments in Khartoum on Saturday, calling for his name and paper to be removed from the conference’s works.

Al-Mahdi said in a statement that Al-Jazeera received a copy of, that his withdrawal is an expression of his rejection. “

He promised that “the statement embodies racism against the Islamic nation, and racism against the black nation,” and said that issuing the joint statement contradicts the Sudanese national law and the Arab national commitment, as it contributes to eliminating the peace project in the Middle East and preparing for a new war.

For its part, the Sudanese Ba’ath Party announced that it had begun forming a national front against normalization.

The various Islamic currents stand against normalization. They see Israel as an enemy, the most prominent of which is the Popular Congress Party, the party of the late Islamic thinker Hassan al-Turabi.

The Popular Congress Party said in a statement, “Our position on the Palestinian issue is based on creed, its pillar is victory, and its summit is the covenant and loyalty to God, Lord of the Worlds, a war on injustice and advocacy for truth.”

Other opponents see the normalization move as a betrayal of the values ​​and ideals of Sudan, and the revolution that toppled President Omar al-Bashir in April 2019.

Welcome to Israel
On the other hand, the supporters of normalization believe that it will contribute greatly to solving the economic crises that the country is currently experiencing, and to the international community’s acceptance of Sudan after years of blockade and sanctions due to its presence on the list of terrorism for more than 27 years.

The Revolutionary Front includes armed and political factions led by Al-Hadi Idris, most notably the Popular Movement led by Malik Agar, the Justice and Equality Movement, and other entities.

The spokesman for the Revolutionary Front, Osama Saeed, expressed his welcome to establish relations with Israel for the benefit of Sudan, and considered it a courageous step.

The head of the Sudan Liberation Movement, Minni Arko Minawi, said that the decision to normalize normalization is an inevitable matter that must be taken, because the situation in the new world determines the participation through interests that dictate the course of any state.

The Sudanese Congress Party said that it does not have any previous ideological position, and that its policy is based on interests, and if there is a real interest with Israel, then there is no objection to normalization.

As on the inside, the responses to the move varied abroad, While some cheered it, others denounced it.

The following are the most prominent international reactions:

It considered the declaration of normalization of relations between the two countries “contrary to the decisions of the Arab summits, as well as the Arab peace initiative approved by the Arab and Islamic summits, and by the UN Security Council in accordance with Resolution 1515.”

A political sin
The Palestinian Islamic Resistance Movement “Hamas”, according to its spokesman Hazem Qassem, considered the normalization of relations between Israel and Sudan “a political sin.”

“We express our condemnation, anger and disgust at this outrageous and insulting normalization,” the movement said in a statement.

The Islamic Jihad movement described the normalization between Sudan and Israel as “a black book recorded by Sudan in its history, and a betrayal of the Arab nation.”

Pay the ransom
The Iranian Foreign Ministry wrote on Twitter, “The White House announcement on Sudan has a completely symbolic dimension. Pay enough blood money, and close your eyes to crimes against the Palestinians, at which time you will be removed from the alleged blacklist (of terrorism). It is clear that the list is fake like the US war on terror,” this is embarrassing!”.

Historic agreement
On the other hand, the UAE Ministry of Foreign Affairs welcomed the reaching of “this historic agreement,” expressing its hope that this step will have a positive impact on the climate of peace and regional and international cooperation.

She added in a statement, “Sudan’s decision to direct relations with the State of Israel is an important step to enhance security and prosperity in the region,” stressing that “this achievement would expand the scope of economic, commercial, scientific and diplomatic cooperation.”

Bahrain also praised the agreement, which it described as “an additional historic step on the road to achieving peace, stability and prosperity in the Middle East region.”

She said, “It would enhance the efforts of brotherly Sudan to achieve the aspirations of its people for security, development and prosperity.”

The German Foreign Ministry welcomed the announcement of the establishment of diplomatic relations between the two countries, and considered it “another important step towards greater stability and peaceful relations between Israel and the neighboring Arab countries,” and thanked the United States for its “decisive” role as a mediator in this agreement.

Sisi writes
For his part, Egyptian President Abdel Fattah El-Sisi wrote on his official Facebook page, “I welcome the joint efforts of the United States of America, Sudan and Israel regarding the normalization of relations between Sudan and Israel, and I value all efforts aimed at achieving regional stability and peace.”

These were the details of the news Welcome, anger and rejection … a domestic and external division regarding... for this day. We hope that we have succeeded by giving you the full details and information. To follow all our news, you can subscribe to the alerts system or to one of our different systems to provide you with all that is new.