Erdogan calls on Macron to ‘check his mental health’ … 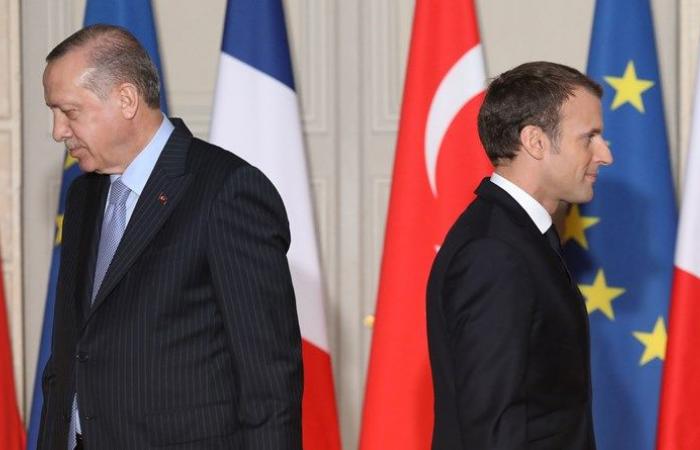 “Samuel Patty was killed because the Islamists wanted to take possession of our future and know that they will not get what they want with self-assured heroes like him.” A sentence uttered by French President Emmanuel Macron, on Wednesday, in the memorial of the French teacher who was massacred in France and the Muslim governments, and brought the French-Turkish conflict back to the fore, by taking back and forth between Turkish President Recep Tayyip Erdogan and the French Presidency (Elysee).

In the details, if the French president said he considered that Samuel Bate was killed “because he was the personification of the republic,” stressing at the same time that his country would not abandon “cartoons,” which was condemned by the Jordanian Ministry of Foreign Affairs, today, “continuation”, denouncing “any An attempt to link Islam with terrorism. ” Macron, in a national eulogy to Patti, indicated that the latter was killed by “cowards” because he was the embodiment of secular and democratic values ​​in the French Republic.

Macron’s statements did not appeal to his Turkish counterpart. Today, Recep Tayyip Erdogan denounced the French president’s policies towards Muslims, saying that he should “examine his mental health.” With this, Erdogan has renewed the heated dispute that arose between Ankara and Paris, over maritime rights in the eastern Mediterranean and the files of conflict in Libya and Syria, and recently we are sponsoring the separatist Nagorno-Karabakh region in Azerbaijan.

“What can one say about a head of state who treats millions of followers of different religions in this way? First of all: Check your mental health,” Erdogan said in a televised speech.

For its part, the French presidency, today, denounced Erdogan’s “unacceptable” statements, in which he questioned Macron’s “mental health”, against the backdrop of his stances towards Muslims.

And announced that the French ambassador to Ankara was summoned for consultations.

The Elysee said in a comment to “France Press”, “The statements of President Erdogan are unacceptable. The escalation of rhetoric and vulgarity are not a method for dealing.”

She added, “We ask Erdogan to change the course of his policy because it is dangerous from all angles. We will not enter into sterile arguments and do not accept insults.”

Earlier in October, Macron described Islam as a religion in “crisis” around the world, and indicated that the government would introduce a bill in December to tighten a law passed in 1905 formally separating church and state in France. He also announced the tightening of supervision over schools and improvement of control over external financing of mosques.

Also, the French presidency indicated today, “the absence of messages of condolence and support from the Turkish president following the assassination of Samuel Bati.”

The Elysee Palace also pointed out “the very offensive statements (of Recep Tayyip Erdogan) in recent days, especially about the call for a boycott of French products.”

In an attack by a Russian Muslim refugee of Chechen origin, Patti, a 47-year-old family head, was beheaded near his school where he is teaching history and geography in a quiet neighborhood in Conflans Saint-Ouenuren, in the western suburbs of Paris, after showing cartoons of the Prophet Muhammad Ali His students. The police wanted the perpetrator, called Abdullah Anzurov, who was 18 years old.

Erdogan added, “What is the problem with the so-called Macron with Islam and Muslims?” He also expected that the French president would not achieve good results in the 2022 elections, as he said, “You are constantly harassing Erdogan. It will not help you with anything.” He continued, “There will be elections (in France). We will see your fate. I do not think that he still has a long time ahead of him. Why? Because he did not achieve anything for France.”

“Stand behind the disasters”

The latest differences between the two leaders emerged in the file of the conflict in the Nagorno-Karabakh region, which is inhabited by an Armenian majority, and declared its separation from Azerbaijan after the dissolution of the Soviet Union, which led to the war of the beginning of the nineties that left 30 thousand people dead.

Macron this month asked Turkey to provide explanations about the arrival of jihadist fighters in Azerbaijan, according to him, and said that “a red line has been crossed.”

For his part, Erdogan accused, today, France, which chairs with Russia and the United States, the Minsk Group, of “standing behind the disasters and occupation in Azerbaijan.” He went to Paris, saying, “You are part of the Minsk Triad. What have you done so far? Have you saved the Azerbaijani lands from occupation? No. You just send weapons to the Armenians.”

He added, “Do you think that you will restore peace with the weapons that you are sending to the Armenians? You cannot, because you are not honest.”

These were the details of the news Erdogan calls on Macron to ‘check his mental health’ … for this day. We hope that we have succeeded by giving you the full details and information. To follow all our news, you can subscribe to the alerts system or to one of our different systems to provide you with all that is new.