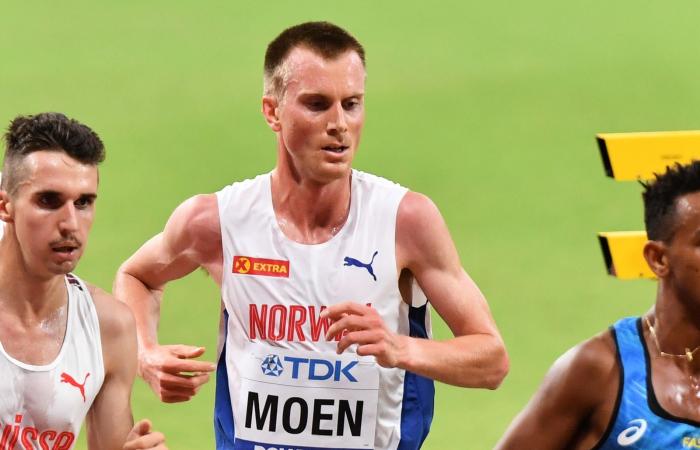 THE SPORTS COLLEGE (VG) Sondre Nordstad Moen (29) is described as an Olympic medal hope in a marathon. He finds it striking that he has not been doping tested out of competition since the end of January.

Nordstad Moen – former European record holder in marathons – has the status of a notifier in the system of Anti-Doping Norway. The foundation is responsible for Norwegian sports’ anti-doping work and thus the testing of Norwegian athletes – and foreign ones on behalf of organizers and international anti-doping agencies.

According to Anti-Doping Norway, the number of Norwegian conscripts is approximately 120. They must state a place where he or she can meet every day, within a period of one hour – for example 07.00 to 08.00 – where doping hunters can obtain doping samples from the person in question. Three breaches of the duty to report within a period of 12 months are to be regarded as a positive doping test.

Nordstad Moen responds to the doping messages: – Realized it would come

Until he was interviewed by VG on Wednesday 14 October, Sondre Nordstad Moen had, according to himself, been doping tested once in this way this year – unannounced and out of competition – nine months ago during his altitude training stay in Africa.

Anti-Doping Norway (ADN0) states that in the period 1 January to 30 September this year, they have obtained 1510 doping samples, compared with 2343 in the same period last year. The figures for outside competition tests in the two periods are 1076 (this year) / 1305 (last year), for tests taken in connection with competitions: 434/1038.

It is worth noting that very few competitions have been held during this period. Almost all the samples were taken by Norwegian athletes.

Anti-doping Norway’s communications manager Halvor Byfuglien believes that the Norwegian anti – doping authority comes out “very well” in terms of the number of tests outside competition in the “pandemic period”. The rest of the world “is not around”.

Sondre Nordstad Moen was in Kenya, which was closed down on March 23, from before Christmas until he returned to Norway in early May. Besides the one time in January, he saw nothing of Anti-Doping Kenya “or other” doping hunters.

Anti-Doping Norway presents the following test figures for the period April to September, which correspond well with the period from Norway “shut down” until now – compared with the same period in 2019:

* Due to the way the athlete is tested and infection control considerations, testing is now much more resource intensive than in a normal year. Cost / resource use per sample has increased significantly, explains ADNO’s communications manager Halvor Byfuglien.

– I do not know if I should choose to see it as if they trust me. That they are confident that I am not doing anything. Or if it is due to the logistics due to covid-19, that this is what makes it difficult, says Sondre Nordstad Moen.

He points out that he has trained and competed with a stated goal of setting a European record in the long period he has not been doping tested out of competition.

He has stayed in Kenya for a long and continuous period, as well as at Juvasshytta in Jotunheimen and eight weeks with Norway’s racing hopeful Håvard Haukenes in the Italian alpine resort Sestriere, which is an hour’s drive from Turin.

Olympic hope: From a summer job as a roofer to Norway’s roof

– We did not see a doping hunter in eight weeks. But I think the Italian curling national team, which was in the same hotel as us for three weeks, was tested once or twice.

– I have read that they (Anti-Doping Norway) have a mobile test car. They know where to find me. Still, I’m not being tested. I was at Juvasshytta for seven weeks and saw no doping hunters there either. But I can do nothing about it, other than being available to them, says the Olympic hope.

Shakes his head after errors in doping test: – Complete crisis for the athletes

He adds that he wonders whether the anti-doping work under the auspices of Anti-Doping Norway has been as offensive and good as he thinks it may have been during the corona pandemic.

– I think it is more talk than action when Anti-Doping Norway says they have completed satisfactory testing, says Sondre Nordstad Moen.

– Motorhome was taken into use about a couple of weeks after the “shutdown” of Norway. First we rented a car, and then we bought one. We now own two motorhomes. It has only been used in Norway, and the majority of samples we have taken during this period have been taken in a motorhome, says Halvor Byfuglien in Anti-Doping Norway.

According to a report from the World Anti-Doping Agency Wada, Anti-Doping Norway – in contrast to other national anti-doping agencies – has managed to keep the test pressure at a good level despite the corona pandemic, says communications manager Halvor Byfuglien in ADNO.

ADNO will be the only national anti-doping organization that has managed to implement procedures and routines that fully meet WADA’s standards for testing during this period when using a motorhome.

Sondre Nordstad Moen says he has not talked to other Norwegian athletes about his experiences, with the exception that he has trained Håvard Haukenes at the height in Jotunheimen and Italy for longer periods.

Sondre Nordstad Moen believes that in a normal year, for example 2019, he has had to take doping tests outside the competition four to five times. This year he has stayed two months in Norway. It’s an unusually long time for him to be. In connection with competitions, he has been tested after the half marathon in Verona on 16 February (4th place), the record attempt at Bislett’s “Impossible Games” on 11 June, the record attempt in Kristiansand on 7 August and the London Marathon on 4 October (9th place).

Moen took the 29-year-old Norwegian record: – I think the Ingebrigtsen brothers take it and

In Kristiansand, he had to make himself available for doping tests in accordance with the regulations. However, in such cases, Anti-Doping Norway is not obliged to test him. In London, he “knew” that he, like the other runners, would be tested, and that the test would be performed at the official competition and athlete hotel.

These were the details of the news Nine months since the last unannounced doping test – VG for this day. We hope that we have succeeded by giving you the full details and information. To follow all our news, you can subscribe to the alerts system or to one of our different systems to provide you with all that is new.