Trial of the January 2015 attacks: Peter Cherif wallows in silence 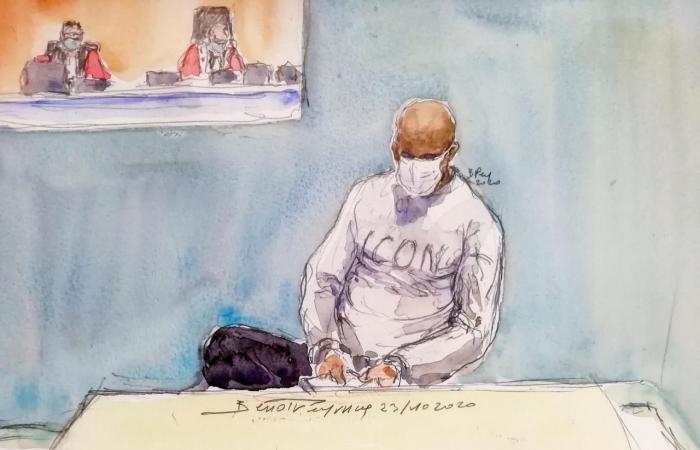 Two rooms, two atmospheres. The defense of freedom of expression on the one hand, silence and contempt on the other. The Special Assize Court of Paris, which judges the attacks of January 2015, experienced a contrasted day this Friday after hearing two eagerly awaited witnesses.

At the end of the afternoon, the face of Peter Cherif, hairless skull, gray sweatshirt, appears on the screens of the courtyard. After being coerced, he finally shows up by videoconference in a bare room in front of a pale blue wall. From the outset, the imprisoned young man recites in a low voice in Arabic the opening sura of the Koran then talks about “the oneness of God”. “It will be my only testimony,” he announces. Promise kept.

Peter Cherif is nevertheless a central figure in this file. At 38, he is already a tutelary figure of the hexagonal jihad. In 2004, he was involved in the matrix file of the Buttes-Chaumont sector, in which Chérif Kouachi, the future assassin of Charlie Hebdo, appears. But, before his trial, he joined Iraq where he was captured by American forces and then imprisoned. Back in France in 2008, he fled again the following year and then went to Yemen where he became involved in Al-Qaeda in the Arabian Peninsula (AQPA).

His arrest in Djibouti in December 2018 and then his extradition to France are a divine surprise for the anti-terrorism services. Because its shadow hangs over the January attacks. His case has also been disjointed and he is currently under investigation for criminal conspiracy in this case.

During his police custody upon his arrival on French soil at the end of 2018, Peter Cherif spoke out. Cherif Kouachi? “He was my friend in France,” he assumes. He also confirms that the younger of the two brothers came to visit him in Yemen in July 2011, accompanied by Salim Benghalem, a future tenor of the Islamic State group. “They were called by executives. […] They told me that they were going to come out, that they had a job outside, ”he explains. But he assures that he was not aware of the Charlie Hebdo attack.

“We can only condemn necessarily, people have suffered. […] I am not Charlie for all that because I remain a Muslim but things should not have come to this, ”he explains. Chérif and Saïd Kouachi have claimed responsibility for their action in the name of Al-Qaeda in Yemen.

But since this inaugural custody, Peter Cherif has been silent. “I was forced to testify in a case where I have nothing to do. I will not answer any questions, ”he blurted out after having once again spoken about the reality of the existence of God and his prophets. “I do not have this attitude and this behavior with the aim of provoking or shocking”, he claims without convincing. The young man, handcuffed, then lowers his head and is absorbed in reading the little book he is holding in his hands, totally indifferent to the questions of the president and then of a lawyer for the civil parties. After twenty minutes as embarrassing as they are tense, the president puts an end to the hearing.

A former jihadist addresses Charlie Hebdo: “It is important that you continue”

In the morning, still by videoconference from a remand center, the testimony of Sonia M. had him, given a breath of fresh air to this very heavy trial. Aged 31, this young woman with long dark hair spent five years with Daesh. Incarcerated on her return to France at the end of last year, she said that her ex-husband, now deceased, occupied the functions of emir of the external operations of the terrorist organization. This man is Abdelnasser Benyoucef, another jihad veteran.

“He explained to me that he was in charge of organizing the Hyper Cacher and Sid-Ahmed Ghlam attacks,” she confirmed to the court. Benyoucef, alias Abou Mouthana, is currently being tried by default before the Special Assize Court which is examining the abortive attack in Villejuif (Val-de-Marne).

Sonia M. also indicated that she had met in Syria Hayat Boumeddiene, the religious companion of Amedy Coulibaly. “She often told me that her husband and the Kouachi brothers had wanted to carry out their attacks together to create cohesion between Daesh and Al-Qaeda”, reveals this woman, whom we feel that she has totally broken with the ideology that had her. seduced in 2014.

Before slipping away, she wants to send a message to the people at Charlie Hebdo: “It’s important that you continue,” she implores. […] You represent freedom, which they hate the most. Do not let go ! “

These were the details of the news Trial of the January 2015 attacks: Peter Cherif wallows in silence for this day. We hope that we have succeeded by giving you the full details and information. To follow all our news, you can subscribe to the alerts system or to one of our different systems to provide you with all that is new.

PREV Over 1,000 rockets fired from Gaza towards Israel since Monday, says army
NEXT India's lauds Gulf assistance in fighting COVID-19