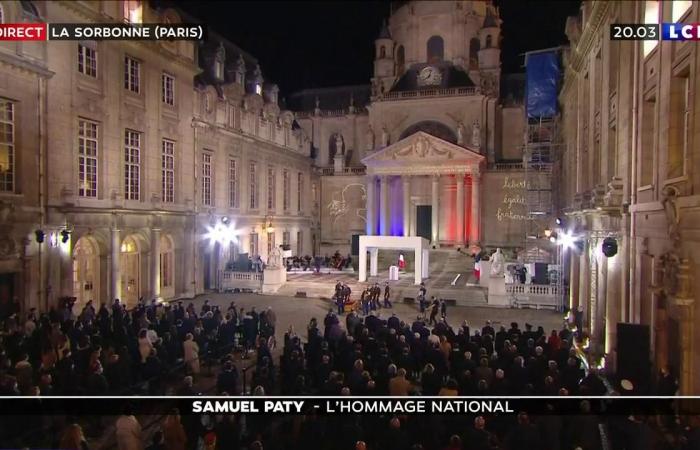 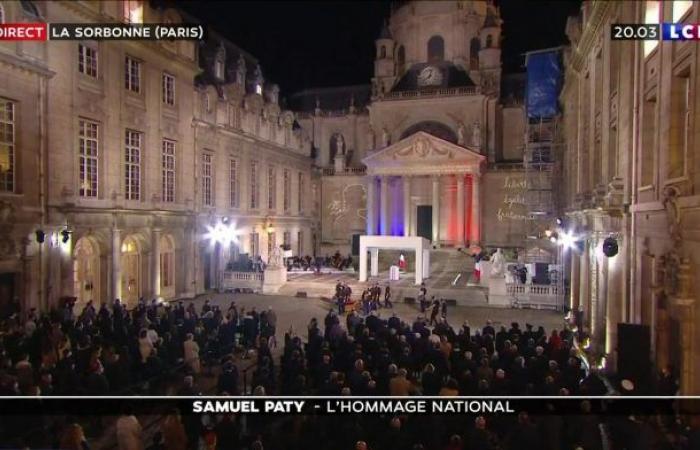 REPLAY – The Head of State praised the memory of Samuel Paty, who became “the face of the Republic” and “freedom”, affirming that France would not renounce “caritatures”, including those of the prophet Mahommet, who resulted in the teacher being assassinated. On October 21, a national tribute was paid to the murdered professor.

During a ceremony at the Sorbonne, the Head of State, who had awarded the Legion of Honor to the professor a few minutes earlier, assured that “we will continue the fight for freedom” in front of 400 guests including relatives of the teacher, students of the establishment, and many French politicians.

Samuel Paty was the victim of a “disastrous conspiracy, amalgam” and “hatred of the other”, according to the president.

“Friday night, I first believed in random madness in absurd arbitrariness. One more victim of gratuitous terrorism. After all, he was not the main target of the Islamists, he was only teaching.” , said the head of state, particularly moved.

Samuel Paty was the victim of “disastrous conspiracy, amalgam” and some “hatred of the other”, added Macron.

“We will continue, professor. We will defend the freedom that you taught so well and we will promote secularism, we will not renounce caricatures, drawings, even if others retreat”, assured Emmanuel Macron, believing that the teacher has become the “the face of the Republic” and “of freedom”.

“Making republicans was Samuel Paty’s fight and if this task today may seem titanic (…) it is more essential, more topical than ever here in France”, Mr. Macron estimated.

Samuel Paty became the face of the Republic “– Emmanuel Macron

“Samuel Paty on Friday became the face of the Republic, of our desire to break terrorists, to live as a community of free citizens in our country”, added the head of state.

By walking back from the Sorbonne via Boulevard Saint-Michel, the Head of State, arrested by a teacher, promised him: “we will not win overnight”, “we will not change society overnight” more “we will not let go “.

The teacher’s memory was hailed throughout the day on Tuesday: thousands of people took part in a white march in Conflans-Sainte-Honorine to say no “to barbarism”. And all the deputies observed a minute of silence, gathered on the steps of the Palais Bourbon.

The assassination of Samuel Paty, professor of history

In New Caledonia, two tributes were paid Wednesday to the murdered teacher, during an official ceremony in a college and then on the occasion of a citizens’ rally, at the initiative of the League of Human Rights .

A minute of silence will also be observed during the professional sports competitions next weekend.

CPF: be careful, you risk losing your training hours!

Closure of the Pantin mosque: “We are in the process of mixing everything up”, say the faithful

Covid-19: to help research, the United Kingdom will infect volunteers

*The article has been translated based on the content of Source link by https://www.lci.fr/politique/replay-revivez-l-hommage-national-de-samuel-paty-a-la-sorbonne-21-octobre-2020-2167811.html
. If there is any problem regarding the content, copyright, please leave a report below the article. We will try to process as quickly as possible to protect the rights of the author. Thank you very much!

These were the details of the news RELIVE- Samuel Paty’s national tribute to the Sorbonne for this day. We hope that we have succeeded by giving you the full details and information. To follow all our news, you can subscribe to the alerts system or to one of our different systems to provide you with all that is new.