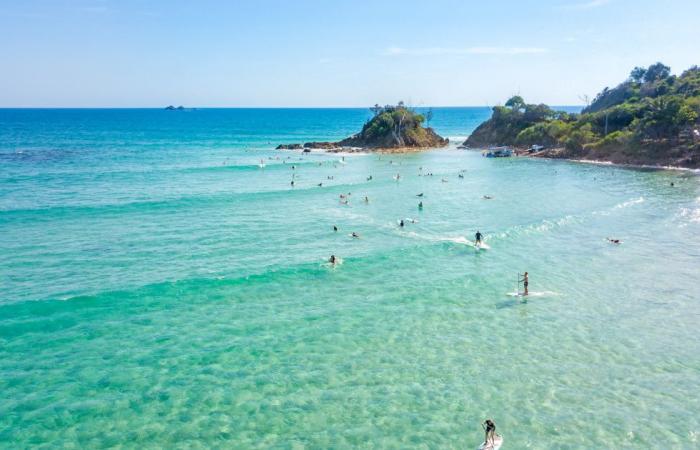 Severe erosion is spreading on Australia’s most famous beach, located on the small town of Byron Bay. After the tide swept over the coast, the beach is almost completely wiped out, writes news.com.au.

Byron Bay has been a favorite destination for tourists all over the world for many years, but if they ever get to return, they will come to a beach of which there is almost nothing left.

The situation was already serious before the violent tide came. It has been sweeping across the coast for the past three days. Now the dunes have been wiped out, and the forces of nature have left great destruction, writes The Guardian.

The world’s beaches are struggling due to climate change. Beaches in Australia and low-lying island nations are particularly at risk and particularly prone to erosion, according to forskning.no.

The main beach at Byron Bay is closed. Areas are cordoned off, and excavators occupy the space where bathers usually rule.

Large resources have been put in to try to prevent further landslides and damage to the popular tourist attraction.

Trees are strewn, and a precipice several meters from the dunes and down to the beach testifies to the forces at play.

– You can not even say that there is a beach here anymore. It’s very sad, says Harry McGhie, who has lived in the Baron Bay area for 20 years, to news.com.au.

Now it is what was once a pristine beach with golden sand, filled with fallen trees, debris and fast. Visitors and local swimmers are asked to find safer places to enjoy the ocean.

– Never been so bad

Locals, such as Neil Holland, who has lived in the region for 47 years, have never seen anything like it. He also says that if the erosion continues unchecked, it could eventually threaten one of the city’s main streets.

“This is the first time I have seen it as bad as now, and it has not stopped yet,” Holland told ABC News.

It is especially bad on the stretch between Clarkes Beach and the city, where several tons of sand have been pulled out to sea.

Dave Byrant, who works in the Green & Clean Awareness Team, who works voluntarily to take care of the beach, describes what has happened in recent months as absolutely terrible.

During the last four or five months, we have lost 20 to 30 meters of the dunes. If major storms or cyclones hit the area, Lawson Street may suddenly have its own beach, he writes on Facebook.

– I hope all parties can work together to save what we can from this precious coastline and all the homes that are located directly opposite the most vulnerable areas here, she says.

Efforts are now being made to support the landslide-prone areas with sandbags, to prevent more landslides before a solution is found on how to deal with the problem.

These were the details of the news Byron Bay – Australia’s most famous beach disappears for this day. We hope that we have succeeded by giving you the full details and information. To follow all our news, you can subscribe to the alerts system or to one of our different systems to provide you with all that is new.