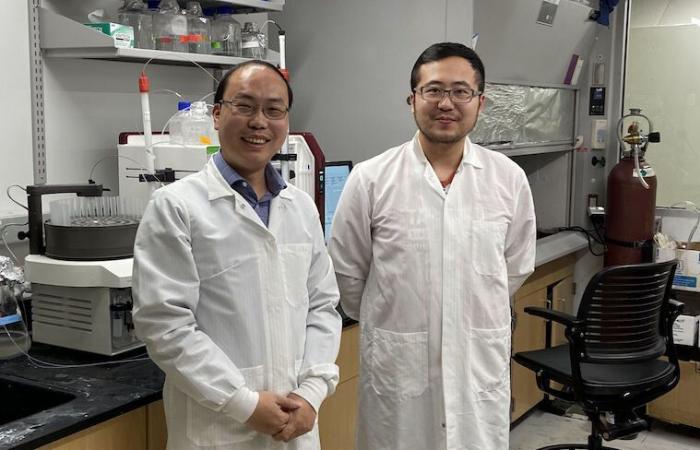 With a small change to the color palette, researchers at the University of Virginia School of Medicine have made it easier for scientists to understand biological processes, track events in individual cells, unravel the mysteries of the disease, and develop new treatments.

Hui-wang Ai (Ph.D.) and Shen Zhang (Ph.D.) of UVA have developed a simple and effective enhancement to fluorescent “biosensors” widely used in scientific and medical research. The biosensors detect specific targets in cells and illuminate them so scientists can monitor and quantify biological events that they otherwise could not.

Most fluorescent protein biosensors glow green or yellow, but Ai and Zhang found a way to shift the green to red. There are great benefits to this, including making it easier for scientists to monitor multiple targets at the same time and look deeper into tissue.

“This innovative method can convert not only existing biosensors, but also all green biosensors developed in the future,” said Ai. “Multi-color and / or multiplex imaging with fluorescent biosensor cells is thus generally accessible.”

While there are red biosensors, these are usually outperformed by their green counterparts. Hence, scientists have been eager to find ways to convert the green color to red, while keeping the benefits of the green sensors and adding new ones, e.g. B. Reducing the visual confusion that can be caused by the natural fluorescence of tissues and cells.

Ai and Zhang found a solution partly through a stroke of luck – or “coincidence” as they describe it in a new scientific article. During their regular lab work, they found that adding a certain amino acid, 3-aminotyrosine, to the green biosensor made it turn red. This is easy and very effective, they report. The red version retained the brightness, dynamic range and responsiveness of the green sensor while offering the additional advantages of a red sensor.

“We modified a number of green biosensors for metal ions, neurotransmitters and cell metabolites,” said Zhang. “A spontaneous and efficient conversion from green to red was observed for all tested biosensors, and only a small amount of optimization was required for individual sensors.”

The researchers tested their improved biosensor on cells that produce insulin in the pancreas. They were able to monitor the effect of high glucose levels on cells, gain new knowledge and give researchers new directions for research.

They hope that their quick and easy sensor upgrade will bring similar benefits to many other scientists and scientists.

“It will have many uses,” said Ai, “such as accelerating our understanding of how the pancreas controls insulin secretion or how neural activity patterns in the brain correlate with complex behavior.”

Provided by the University of Virginia

These were the details of the news This red light means “go” for medical discoveries for this day. We hope that we have succeeded by giving you the full details and information. To follow all our news, you can subscribe to the alerts system or to one of our different systems to provide you with all that is new.