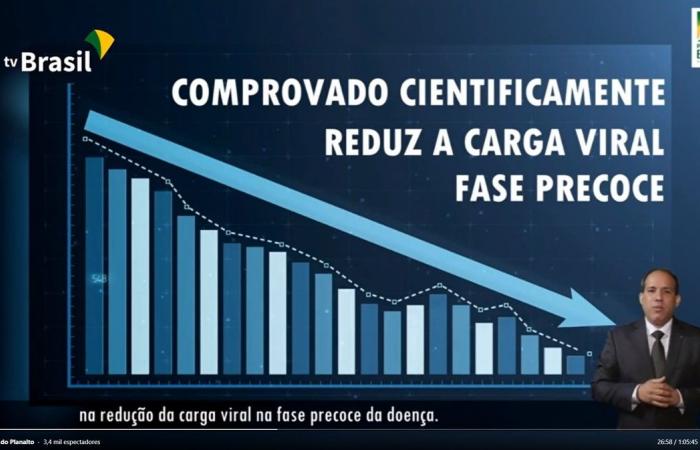 The minister of Science and Technology, Marcos Pontes, affirmed, on Monday (19), that the graph presented by the portfolio that supposedly showed the effectiveness of a remedy against Covid-19 was “merely illustrative”. The image released by the minister did not contain data to support the claim and was similar to those available on an image bank service (see comparison below).

“In the meantime, if you contract covid, remember the conclusion of the studies presented today. This is the important thing,” said Pontes, on a social network, at 11:55 pm (Brasília time) on Monday. “Note: obviously, as easily deduced by the axes and the speech of the responsible researcher, the graph of today’s presentation was merely illustrative. “

Video screen presented at the ceremony of the Ministry of Science and Technology. Base and data are identical to those available at ShutterStock agency. – Photo: Playback / TV Brasil

The statements about the graphic and the effectiveness of the medicine were made after the advice of the Ministry of Science and Technology (MCTI) had already informed that “the graphic used in the video presented in the event of announcement of the results of clinical trials with nitazoxanide does not make part of the study data and appears only for illustrative purposes “. (See the full note at the end of this article).

Without giving details of the results or presenting the study in its entirety, the government reported that clinical trials with volunteers showed that the drug reduced viral load when it was taken within 3 days after the onset of symptoms.

The research has not yet been published in any scientific journal, according to Pontes. “The graphs and numbers of the research will be presented after the published article”, wrote the minister in the social network.

“The Ministry of Science, Technology and Innovations (MCTI) clarifies that the graphic used in the video presented in the event of announcement of the results of clinical trials with nitazoxanide is not part of the study data and appears only for illustrative purposes.

The qualitative result presented today is, obviously, based on data and complete studies in possession of the responsible researchers.

At the moment, the MCTI and the study coordinators cannot yet disclose the numbers and calculations of the study to preserve its originality, since it has been submitted to an international journal, which limits its publication.

However, Covid-19 continues to advance in Brazil and, in the role of doctors and scientists, a decision was made not to omit the qualitative result of an extremely important study, which can help save lives while we wait for the vaccine.

After the publication of the scientific article, we will make a technical presentation for those interested, showing all numbers, calculations, equations, methods, etc. “

Nitazoxanide is a drug used in the country by the trade names Azox and Annita, and is part of the group of antiparasitic and wormers. The drug also has antiviral action and is prescribed in cases of rotavirus.

To avoid self-medication, the drug started to be sold only with a prescription in April this year. However, a decision by the National Health Surveillance Agency (Anvisa) of September 1 removed the requirement to retain revenue.

The drug containing nitazoxanide, commercially available, has no indication for the coronavirus, according to the World Health Organization (WHO).

These were the details of the news ‘Merely illustrative’, says Minister of Science on graph without data used... for this day. We hope that we have succeeded by giving you the full details and information. To follow all our news, you can subscribe to the alerts system or to one of our different systems to provide you with all that is new.