Why not being able to party more is more than a... 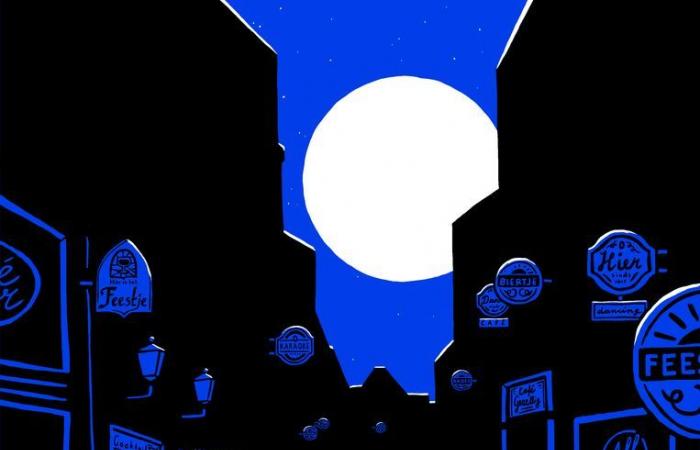 The five-day online edition of Amsterdam Dance Event starts on Wednesday, which replaces of the still canceled corona-proof festival. According to journalist Gijs van der Sanden, we can take the breakdown of nightlife a bit more seriously.

“Let’s go under,” said a friend when we descended the stairs of the basement in De School on the night of 8 to 9 February. Although we usually planned these kinds of evenings carefully in recent years – as befits the cliché agenda-hedonists in their thirties – we had now spontaneously ended up on the dance floor again. A decision that I was very happy about afterwards.

A few hours later we surfaced again. When I cycled home through the Rembrandt Park in the twilight, I felt as I often felt when I had spent an evening in a dark club: satisfied, exhausted, lighter – as if I had some mental illness in that swirling mass of dancing, sweaty bodies. had thrown ballast overboard.

“Just what we needed,” I texted my girlfriend later that day with a devil emoji.

The inevitable hangover had already presented itself, but on a completely different level the evening had given me energy, brought me to new ideas, broadened my outlook.

“I’ll be back in a while,” my girlfriend texted back.

But that possibility no longer presented itself due to the advancing corona virus. Seven months ago the clubs closed their doors (even the doors of De School for good) and it does not look like they will reopen any time soon.

In a pandemic, are there worse things than not being able to go out anymore? That question hangs like a thundercloud above this piece – above all the conversations you have about the lack of nightlife – and everyone will agree on the answer: of course there are worse things. There are elderly people who die lonely and alone, there are people who have always been perfectly healthy and can no longer climb the stairs due to Covid-19 and there is an almost constant threat: of overcrowded ICs, an unparalleled economic crisis and a future. which has become insecure for everyone.

It is understandable that the illegal raves that are in the news every weekend meet with conviction. Without supervision and regulation, they pose a direct threat to public health. But even if parties are legal – in the open air, with a permit – organizers and DJs can count on incomprehension. Russian techno DJ Nina Kraviz received a lot of criticism in August when videos surfaced on Twitter of the set that she played before an Italian audience – without masks and distance between them. She herself only posted a photo on Instagram from a day after her performance, probably not entirely coincidentally.

Night and rave culture has become a minefield, said a British magazine journalist DJ Mag recently in a great backstory. Even when organizers try to obey all the rules, he says, you might wonder how ethical it is to party in a pandemic at all.

Is it actually okay to have fun when the world is on fire? Opinions will differ on this. What is certain is that contemporary club culture did not arise at all from a vulgar need for hedonism – an important nuance that not everyone, Dutch politicians for example, seems to have the same regard for.

In his famous essay In Defense of Disco from 1979, film scientist Richard Dyer describes how disco, the genre of music that emerged in New York in the early 1970s, offered marginalized groups a temporary escape from everyday life, full of sexism and racism. Clubs became safe spaces where people of color, trans people and queers could be themselves undisturbed.

While nighttime culture has been highly commercialized over the decades and is often dominated by white men – a pain point for many, as house and techno are rooted in black culture – many clubs still hold that function: not just as a place where people can in music, but also where they can meet like-minded people, shape their identity and dare to do things they wouldn’t think about during the day.

Deeper into the closet

The Amsterdam nightlife has brought a lot to me personally. In the village of Brabant where I come from, going out mainly consisted of tapping away as many flügels as possible, ‘tonguing’ with the girls from my class and playing along with Yes no from Jody Bernal. Nothing wrong with that, but it only pushed me deeper into the closet as an insecure teenager struggling with his sexuality.

That changed when I moved to Amsterdam in 2004. I kissed a boy in the Trut for the first time, danced with my first boyfriend in our carefully torn T-shirts in Club 11 (we were still young) and had exciting evenings in the Church. You could say that nightlife shaped me: at night I grew from an insecure boy who struggled with his sexuality to someone who is a lot more confident about who he is and about his place in the world.

I am lucky, I realize more and more recently. At least I’ve been through all these evenings and nights. I was able to indulge myself. The stories of young people dealing with anti-gay violence at illegal raves hurt: they show the importance of safe places with strict door policies, so that uninvited guests can be kept away.

‘Night culture is drowning,’ was the headline of this newspaper in September after a manifestation on Museumplein, drawing attention to the importance of Amsterdam’s nightlife. For months there has been no prospect of any prospect for the sector.

Now that we are in the middle of the second wave of the coronavirus, the hospitality industry has had to close its doors again and we are home again, it may seem our least high priority to talk about nightlife. But then you reason from the idea that nightlife is a luxury; an extra to give life a little more shine.

For a lot of people, nightlife is much more than that. Not just for those who work in the industry and whose livelihood depends on it – club owners, DJs, bar staff, festival organizers, security guards, cleaners – but also for those who need clubs and entertainment to simply be themselves.

I want to stay away from possible solutions; I don’t have that and I don’t understand it either. It is indeed a minefield. In my view, it would make a big difference if there were more recognition – from politics, from society – for the fact that nightlife is relevant. In a cultural sense, in a social sense, that the lack of it goes beyond not being able to go to hell for a night, that the current situation is duping and desperate people in all kinds of ways.

When I think of that February night in De School, when everything was still different, the feeling that takes hold of me can really only be described in one way: as mourning. Call it affectionate, exaggerated or inappropriate, but I miss the spontaneous, the kissing, the music, the lights, the drinking from each other’s glasses, the fog in my head and the prospect of a night without end, where anything is possible.

Blown over from Japan and increasingly popular because of the pandemic: the listening bar. DJs play listening music – from jazz to ambient – for a seated audience in an intimate setting. It is a way to still enjoy (electronic) music in the present time. In and around Amsterdam you can go to the Dynamic Range Music Bar in Het HEM in Zaandam and the nightclub Doka in the Volkshotel for this type of listening session. Due to the current measures, the hotel is only open to hotel guests.

The Amsterdam Dance Event (ADE) will take place this year from 21 to 25 October. Due to the corona crisis, a large part of this edition would already be digital, but with a selection of small live shows in venues such as Paradiso and the Melkweg, the organization also wanted to set up a corona-resistant and physical festival. Due to the stricter measures announced last week, the organization had to return to the drawing board. A few shows remain for a limited audience; a number of planned shows will be live-streamed without an audience through ADE’s digital platform. Look for the new program on amsterdam-dance-event.nl.

These were the details of the news Why not being able to party more is more than a... for this day. We hope that we have succeeded by giving you the full details and information. To follow all our news, you can subscribe to the alerts system or to one of our different systems to provide you with all that is new.