vaccine is safe and has fewer reactions than others tested in... 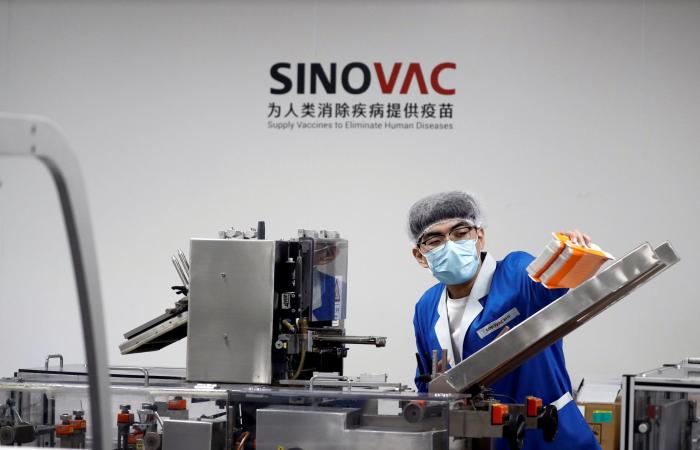 SÃO PAULO – Dimas Covas, director of the Butantan Institute (São Paulo), today released the preliminary results on the safety of CoronaVac. The vaccine is developed by the institute, in partnership with the Chinese pharmaceutical company Sinovac.

The analysis of the results of Brazilian clinical tests showed that, of the 9 thousand volunteers aged between 18 and 59 years, only 35% had mild adverse reactions after the application, such as pain at the application site.

The most common reactions among study participants after the first dose were pain at the application site (19%) and headache (15%). In the second dose, the most common adverse reactions were pain at the application site (19%), headache (10%) and fatigue (4%). Low fever was registered in only 0.1% of the participants. There have been no reports of a serious adverse reaction to the vaccine so far.

Covas says the Butantan vaccine did better than the other three tested in the country on average for mild, moderate or severe side effects. “It is the safest in terms of side effects at this moment not only in Brazil, but in the world,” said Covas.

Governor João Doria (PSDB) supported the speech by the director of Instituto Butantan during a press conference at Palácio dos Bandeirantes, also in São Paulo.

“The first results of the clinical study carried out in Brazil prove that, among all vaccines tested in the country, CoronaVac is the one with the best and most promising rates in Brazil. In fact, it is the most advanced vaccine at the moment ”.

Vaccine is safe, but effectiveness has not been proven

It is necessary to clarify, however, that these results do not prove that the Butantan vaccine is really effective against Covid-19. The results presented by the institute concern only the safety of the vaccine in relation to possible side effects on the human body.

“These data show the success of the drug from the point of view of safety and this can speed up the process for the inclusion of the vaccine in the National Immunization Program [PNI]”Said João Gabbardo, executive secretary of the Coronavirus Contingency Center in São Paulo.

The secretary explained that, although this first test is very important, it does not define the approval or not of the vaccine per se. It is necessary to analyze whether the drug is triggering a response in the volunteers’ immune system.

The definitive conclusions about the effectiveness of a vaccine depend directly on a minimum number of occurrence of the disease in question among vaccinated volunteers. “We have to wait for a natural transmissibility of the disease to be able to conclude efficacy results,” said Gabbardo.

This rate of infected people is necessary for researchers to compare how many of those infected were in the vaccinated group and how many were part of the group that received the placebo. Among the scientific community, this is a method considered standard in the development of new drugs and checks whether the vaccine really managed to protect those who were exposed to the virus.

In the case of CoronaVac, the minimum required is 61 contaminants. Gabbardo said that the state of São Paulo enters a downward curve in the number of new cases and hospitalizations, which shows that the virus is losing its strength of transmission. This can make it more difficult to reach the number of infections. “We are increasing the number of volunteers. We need people showing symptoms and confirmation of the disease ”, said the secretary.

Covas made an appeal for the population to volunteer. According to the director of the Butantan Institute, testing should reach the control number by December, but it is not possible to “give a more precise date”. “Until we have this data, the dossier at Anvisa is not complete. The registration process for the non-vaccine takes place ”, explained the director of the institute.

Anvisa created a new analysis flow, which allows researchers to continuously send research data so that the agency can approve a drug for national use. But that flow depends on a study that proves the vaccine’s effectiveness.

Because of the pandemic, the agency has also revised its rules on the minimum effectiveness required for granting registration for the vaccine. Generally, immunizers are only approved if they prove to be over 70% protection. For vaccines against covid-19, Anvisa already admits that it can grant the license with 50%.

According to Doria, conversations between the state government, the Butantan Institute, Anvisa and the Ministry of Health are taking place in “harmony”. “We want to follow up on a national level and not something isolated in São Paulo, offering the vaccine to more Brazilians than the 46 million who live in the state,” added the governor.

It is worth remembering that, on Wednesday (21), the governor should meet at 10 am with Eduardo Pazuello, Minister of Health. The goal is to reach a conclusion on the participation of the vaccine sponsored by the state of São Paulo in the federal program. Right after that first meeting, a meeting with Antônio Barra Torres, president of the National Health Surveillance Agency (Anvisa), is scheduled for 1 pm.

CoronaVac doses pledged by the government

The São Paulo government has said that the state will receive 6 million doses imported from China ready for application by October. Another 40 million, to be processed in São Paulo, should arrive by the end of this year. The 46 million initial doses will cost US $ 90 million, which also includes the transfer of technology from Sinovac to produce the vaccine by Butantan. Another 15 million doses to be processed will arrive by February 2021.

The government also announced that it raised R $ 97 million with the private initiative for the Butantan Institute to start building a new factory, with the capacity to manufacture 100 million doses of CoronaVac per year.

The government expects to start vaccination in the state in the second half of December, but the campaign guidelines still need to be approved by the Ministry of Health.

After practically a year of pandemic, the world reaches the mark of 40 million infected. The death toll from Covid-19 is over 1.1 million. USA, India and Brazil concentrate more than half of the cases in the world and lead in number of contaminated and deaths.

The daily record of new cases was recorded at the end of last week, with the global mark of new infections by the disease surpassing 400 thousand for the first time. Last week, an average of 347,000 new cases per day were recorded worldwide, against an average of 292,000 in the first week of October.

The American continent is by far the most affected by the disease. North, Central and South America represent about 47.27% of the total world cases, index pulled by the numbers of countries like USA, Brazil, Argentina and Mexico. But new cases in Europe continue to exceed 150,000 a day. Countries such as Italy, the Netherlands, Germany, Austria, Poland, Ukraine, Cyprus and the Czech Republic registered records in daily infections.

InfoMoney Newsletter
Information, analysis and recommendations that are worth money, every day in your email:

These were the details of the news vaccine is safe and has fewer reactions than others tested in... for this day. We hope that we have succeeded by giving you the full details and information. To follow all our news, you can subscribe to the alerts system or to one of our different systems to provide you with all that is new.