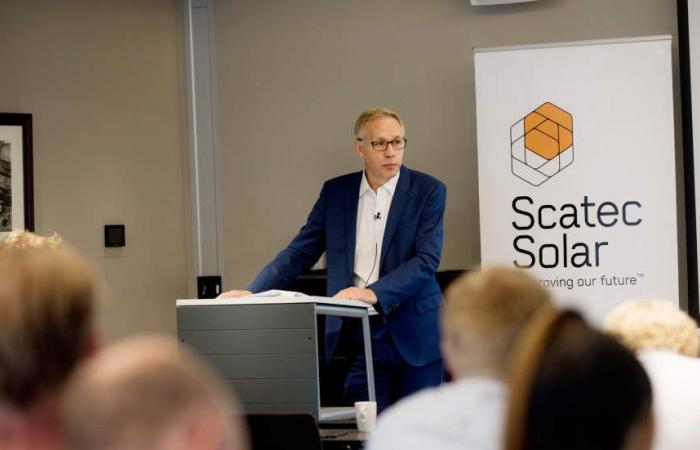 THE SUN SHINES: The sun really shines on Scatec Solar and CEO Raymond Carlsen during the day. Photo: Siv Dolmen

The sun is really shining on Scatec Solar and CEO Raymond Carlsen during the day. On Friday, the energy company announced the acquisition of SN Power from Norfund and several analysts were very excited about the acquisition. SpareBank 1 Markets believed, among other things, that the news “will make Scatec a global leader in renewable energy”.

Investors were also thrilled and the share thundered up 18.1 percent to 256 kroner on Friday. With a turnover of NOK 650 million, the solar share was by far Friday’s most traded on the Oslo Stock Exchange.

The brokerage house Nordea Markets hangs on and on Monday raises the price target on the Scatec Solar share SSO to NOK 320, from the previous NOK 235, which corresponds to an upside of 36 percent, reports TDN Direkt.

“At the same time as the acquisition agreement of SN Power will create value in all target figures, we find it equally important that the agreement will strengthen Scatec’s competitive position in the long term and enable further growth acceleration and value creation. Without adding any synergies, we increase our price target to NOK 320 “, the brokerage writes in an update.

These were the details of the news Nordea Markets raises the price target for solar shares by almost... for this day. We hope that we have succeeded by giving you the full details and information. To follow all our news, you can subscribe to the alerts system or to one of our different systems to provide you with all that is new.