Hooded men set fire to and destroy churches during protests in... 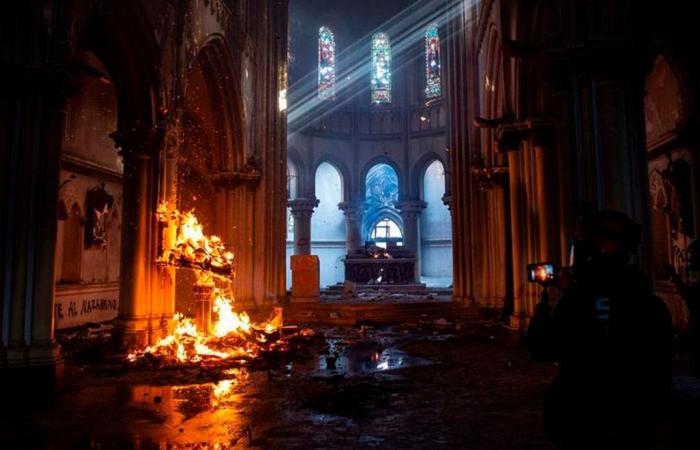 In Chile, a church consumed by fire and another badly damaged in the vicinity of the Plaza Italia of Santiago was the result of violent attacks by hooded men during a massive manifestation, which was initially peaceful, on the occasion of commemorating the first anniversary of the beginning of the social revolt in the southern country.

The little church of the Assumption became the second temple to be attacked during this day of protests in the capital. When the dome fell into flames after the collapse of the structure, several protesters celebrated.

The structure was attacked by hooded protesters during several hours of peaceful demonstration in the surroundings of the Plaza Italia, where they celebrated the beginning of the social outbreak of October 18, 2019.

When the church burned, firefighters and rescuers made a fence to prevent the collapse of the structure from impacting on people.

“Let it fall, let it fall”, shouted some hooded men, who celebrated the subsequent fall of the dome of the small church, also known as the “parish of the artists”, according to the local press.

Earlier, very close to where this fire occurred, the church San Francisco de Borja, which belongs to the Carabinieri, was looted and burned, but the firefighters managed to put out the flames without it passing to the elderly.

The demonstration of this Sunday, October 18, occurs one week after plebiscite in which Chileans will decide whether or not to change the Constitution that remains as a legacy of the dictatorship of Augusto Pinochet (1973-1990). The referendum was called after a broad political agreement reached after weeks of violent protests last year.

Several polls agree that the option to approve the constitutional change could win with more than 60% of the votes, after a year in which the demand for greater social welfare has a transversal support in society, as well as a strong condemnation of violence in the streets.

These were the details of the news Hooded men set fire to and destroy churches during protests in... for this day. We hope that we have succeeded by giving you the full details and information. To follow all our news, you can subscribe to the alerts system or to one of our different systems to provide you with all that is new.