Van Dyck is undergoing surgery … and a statement from Liverpool... 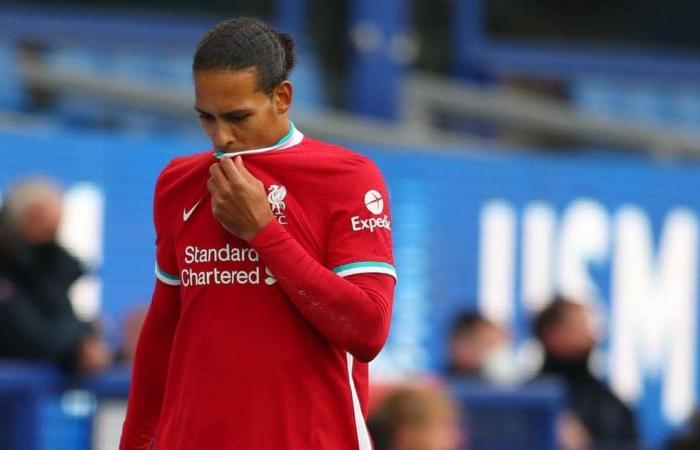 The Dutch player was injured at the start of the derby match against Everton (2-2), during the fifth stage of the “Premier League”, but the team did not specify the period of time that he will be absent from the stadiums.

The injury occurred a few minutes after kick-off, after contact with Everton goalkeeper Jordan Pickford, and Van Dyck was discharged from the stadium and then sent after the match to the hospital to conduct the necessary tests and visited a specialist doctor, in the morning, to determine the seriousness of the injury.

According to the team’s statement, the injury proved to be serious, “Liverpool can confirm that Fergel van Dyke He will undergo surgery on his knee as a result of the injury he suffered during Sunday’s 2-2 draw at Everton Stadium.

He added, “The center-back suffered damage to the ligaments after the incident with the” Blues goalkeeper ” Jordan Pickford 6 minutes into the game at Goodison Park. Van Dyck was forced to leave the match and it was found in the injury assessment that surgery was needed. “

The team explained that, “at this stage, no specific timetable has been set for his return to play,” adding, “After the operation, Van Dyck will start a rehabilitation program with the club’s medical team in order to allow him to regain full fitness as soon as possible.”

It usually takes several months for a player to recover from Surgery Similar, even some British media expected that the 29-year-old would miss the entire season, or at least even the final weeks of it.

This injury constitutes a severe blow to the team and its German coach, Jürgen Klopp, both in terms of the campaign to defend the domestic league title, which the “Reds” won for the first time since 1990, or at the level of Champions League Who starts his career on Wednesday against Ajax in the fourth group, which includes Italian Atalanta and Danish Medtieland.

These were the details of the news Van Dyck is undergoing surgery … and a statement from Liverpool... for this day. We hope that we have succeeded by giving you the full details and information. To follow all our news, you can subscribe to the alerts system or to one of our different systems to provide you with all that is new.