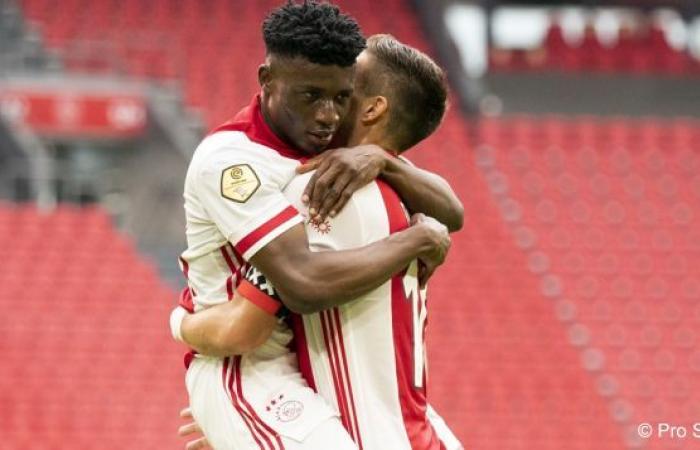 Ajax has done good business in the battle for the national title. Co-leader sc Heerenveen was put aside 5-1 thanks to two goals from Dusan Tadic, among other things. Davy Klaassen scored on his return in the shirt of Ajax, while Antony and Mohammed Kudus also hit the mark.

The game started energetically for the home team, which started with David Neres, Klaassen, Kudus and Lassina Traoré, because after just four minutes of play, it was already hit via Tadic. The Serb got the ball on the left in the penalty area, cut inside and then curled the ball beautifully past goalkeeper Erwin Mulder.

In the twenty minutes after the opening goal, not much happened in the Johan Cruijff ArenA. Ajax took the initiative, combined a lot, but was unable to create great opportunities. It needed a handball from sc Heerenveen defender Sherel Floranus to get to the next shot. There was a lot of doubt about this in the arbitration, because the VAR did not dare to state with certainty that Floranus deflected a Tadic cross with the elbow. Björn Kuipers thought so, gave the team from Amsterdam a penalty kick and Tadic scored his second goal of the afternoon.

The 3-0 was not long in coming. Ajax continued to combine and that was eventually rewarded by Kudus. Surrounded by numerous sc Heerenveen defenders, he got the ball from Ryan Gravenberch to shoot almost immediately. Mulder could not answer in time and could only fish the ball out of the goal. With a 3-0 score, both teams went into halftime.

Ajax holds back after the break

After the break, the game did not change too much. The away team did not hang around, Ajax looked for the way forward and handed out some pinpricks. However, that did not yield an early goal.

Ajax crumbled around the sixtieth minute, even though Antony and debutant Sean Klaiber brought fresh blood into the team, and the opponent kept coming. In the end, striker Henk Veerman punished that in the 66th minute by taking full advantage of spaces left by the Ajax players.

It threatened to become tense for a while because of Veerman’s goal, but that tension was nullified by sc Heerenveen itself because Traoré was brought down in the penalty area at a corner. Referee Kuipers thought it was a penalty kick and it was cheerfully cashed in by Klaassen, who made his return to Ajax on Sunday.

After the 4-1 sc Heerenveen also seemed to believe it. The Frisians no longer put the pressure on it and Ajax quietly combined by hoping to score another goal. Erik ten Hag seemed to use the final phase of the match mainly to allow some players to play. This is how Lisandro Martínez, Klaas-Jan Huntelaar and Quincy Promes came within the lines.

The game seemed to be dying out, but that didn’t seem like a good idea for Kudus and Antony. The former sent the Brazilian deep, after which Antony cut in and then outwitted goalkeeper Mulder with a hip shot.

That turned out to be Ajax’s last feat of the day. After three minutes, the referee said it was enough and whistled. Ajax wins 5-1 and closes the weekend as the leader, provided PSV does not win when visiting PEC Zwolle.

– Davy Klaassen can make his comeback as an Ajax player. At the beginning of October, the midfielder came over from Werder Bremen for eleven million euros. His last match in white-red-white was the Europa League final against Manchester United on 24 May 2017.

Do you think Davy Klaassen will score and Ajax will beat sc Heerenveen? Bet and get 2.65 times your bet back!

These were the details of the news Ajax beats Heerenveen with large numbers when Klaassen returns for this day. We hope that we have succeeded by giving you the full details and information. To follow all our news, you can subscribe to the alerts system or to one of our different systems to provide you with all that is new.