In the country where the mask is optional 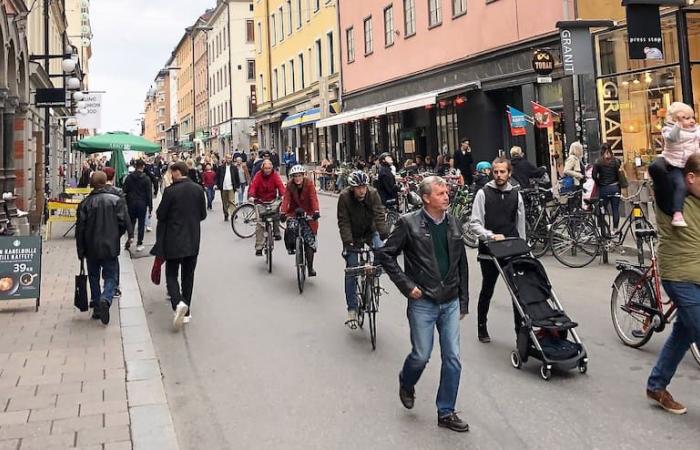 No compulsory masks, no closures of schools, restaurants and bars: a Quebecer has decided to go and live in Sweden for three months, where life seems to have not stopped.

“It was a shock when we arrived, because no one wears a mask. Everything is open, people continue to live their lives, even if they have recommendations. It is as if the virus no longer exists. It’s a bit unrealistic, ”laughs Robert Tessier, a 57-year-old Quebecker who put his bags down in the Swedish capital, Stockholm, two weeks ago.

After reading many articles about Sweden throughout the pandemic, the 50-year-old decided to go see with his own eyes how it goes.

In Sweden, Public Health has chosen to promote education rather than impose restrictions. In mortise, Robert Tessier who went to live there three months.

Because since the start of the global health crisis, Public Health, which fully manages the measures without politics, has chosen to take much less restrictive measures for its population than in other regions of the world, such as Quebec.

In the past week, Sweden recorded a total of 4,655 new coronavirus cases and 15 deaths. In Quebec, on the same dates, the province recorded 6,971 new cases and 69 deaths.

However, COVID-related mortality in that country is among the 15 highest in the world, according to data from Johns Hopkins University.

Despite this, schools never closed, neither did restaurants and bars. Citizens are called upon to wash their hands frequently with hot water and soap. And people over 70, like people with any flu-like symptoms, need to self-isolate. Teleworking is also encouraged, where possible.

Instead of closing everything, Sweden preferred to accustom its population to live differently for longer.

“With everything going on in the rest of the world, life looks really normal here, it’s really unrealistic. There are people in bars and restaurants, and people in shopping centers, it’s strange, ”says Mr. Tessier.

For Quebecer Philippe Longchamps, who settled in this northern European country 18 years ago, we should not believe that life has not changed and that the Swedish model is perfect.

“It is certain that for those who arrive from another country, where the measures are harder, the contrast is striking. But for us who live here, we see that people are quieter than before, there are fewer people in the streets, the traffic is also decreasing almost everywhere ”, affirms the one who lives in the region of Malmö, in the south-east of the country.

Same story for Josée Perron, who has lived for three years in Göteborg, the second largest city in the country.

“In fact, since we had the recommendations [de la Santé publique suédoise], we learned to live with it, we adapted. We’ve been living with new habits for six months, and everyone is very respectful, ”says Mme Perron.

For the two expatriates, if health standards are so well respected, it is mainly because it is in the Swedish culture to listen to the recommendations.

A management model not necessarily applicable in Quebec

We often compare Sweden to Quebec, but the way things are done in this country could very probably not work here because of the difference in culture.

“There is a joke that we often make [en Suède]is that the Swedes are eager for the two-meter distance rule to be raised so that they can regain their five-meter front. It is not a people who are super warm, as we can be in Quebec, ”laughs Josée Perron, a Quebecer who has lived in Gothenburg for three years.

For her, as for other Quebec expatriates who live in this Scandinavian country, if it is difficult to apply the Swedish public health rules in Quebec, it is mainly because Quebecers tend to respect the rules less. .

“In Sweden, for example, there are never any police on the highways, because everyone respects the speed limit. When I was still in Quebec, it is true that I often overtook ”, adds Mme Perron laughing.

“The Swedes are extremely respectful of the rules, it’s really in their nature,” says Sophie Lundholm, a Franco-Swedish who has lived in Montreal for six years. If they are told to put on a mask, they will. In Quebec, there is a little Latin side which means that people are a little more vindictive, ”she explains.

For Philippe Longchamps, a Quebec professor who has lived in Sweden for 18 years, it is also the fact that Swedish citizens have a collective spirit and an important social conscience which plays an important role.

“Most Swedes have lined up behind the decisions of Public Health. It’s not at all because the Swedes are sheep, he explains. In general, the average Swede is very, very educated, he has a fairly robust scientific education, so he understands that taking responsibility and staying home at the slightest symptom solves a large part of the problem. “

For Iwona Olsson, a Swede who has lived in Quebec for almost three years, the Swedes indeed prefer to listen and follow the recommended measures rather than having them imposed by law.

“Here, I have the impression that this mentality is very different. People seem to take less responsibility and not see that their choice can have an impact, and that’s not necessarily fair with COVID, ”she argues.

Like her, Sophie Lundholm believes that the two governments have put in place measures that corresponded to the culture of the country.

*The article has been translated based on the content of Source link by https://www.journaldequebec.com/2020/10/18/au-pays-ou-le-masque-est-en-option
. If there is any problem regarding the content, copyright, please leave a report below the article. We will try to process as quickly as possible to protect the rights of the author. Thank you very much!

These were the details of the news In the country where the mask is optional for this day. We hope that we have succeeded by giving you the full details and information. To follow all our news, you can subscribe to the alerts system or to one of our different systems to provide you with all that is new.

PREV Behind Moroccan-German diplomatic crisis, a list of grudges
NEXT Trump, returning to political stage, flirts with 2024 run