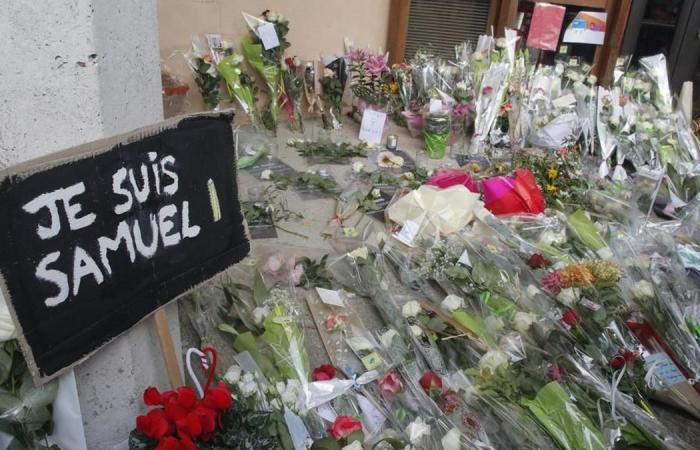 Many demonstrations are planned in France on Sunday to pay tribute to the decapitated professor for having caricatures of Mohammed for his students.

Against the horror, the mobilization: major demonstrations are expected Sunday throughout France in tribute to Professor Samuel Paty, assassinated on Friday for showing his students caricatures of Muhammad, an attack which aroused enormous emotion and for which ten people were taken into custody.

The leaders of the main political parties, associations and unions will demonstrate on Sunday at 3:00 p.m. in Paris and in many other cities including Lyon, Toulouse, Strasbourg, Nantes or even Marseille, Lille and Bordeaux.

The Charlie Hebdo newspaper also joined the appeal in the capital. The rally is to take place on Place de la République, a traditional place of demonstrations which had been the epicenter of the enormous parade of January 11, 2015 after the Charlie Hebdo and Hyper hide attacks, which had gathered around 1.5 million of participants.

Friday afternoon, Samuel Paty was beheaded near the college where he taught history and geography in a quiet area of ​​Conflans-Sainte-Honorine, in the western suburbs of Paris. Her assailant, an 18-year-old man, was then shot nine times by police.

This new Islamist attack caused a shock wave in the country. As of Saturday, several hundred people gathered in Nice (south-east) or Rennes (west) to denounce an “act of barbarism” and defend “the values ​​of democracy”.

The Association of Mayors of France on Saturday called on all municipalities to pay tribute to the victim, proposing “to display on their buildings the hashtag #JeSuisEnseignant, to respect a minute of silence at the next meeting of the municipal council and choose a day for the town hall flag to be half-masted ”.

A national tribute will be paid Wednesday in coordination with the family of the murdered teacher, announced the presidency of the Republic without specifying the location. “Other expressions (of support editor’s note) and announcements are planned after the meetings”, announced the executive.

Prime Minister Jean Castex said he was working on “an even stronger, faster and more effective response strategy when a teacher is threatened”. “The State will live up to the commitment (of teachers) by responding with the greatest firmness to all the enemies of the Republic”, he assured the Journal du dimanche.

The leader of the deputies Les Républicains (right) Damien Abad for his part suggested that the body of the teacher be transferred to the Pantheon, where the great figures of the French Republic such as the writer Victor Hugo or the scientist Marie are buried Curie, pleading for a “strong symbolic act”. “The terrorists wanted to behead the Republic. You have to show that she is standing. It goes beyond the very person of Samuel Paty, ”he stressed.

In Conflans-Sainte-Honorine, where the attack took place, a thousand parents, elected officials or ordinary citizens gathered with emotion on Saturday in front of the college where Samuel Paty worked. Many of them were carrying “I am a teacher” or “I am a teacher” signs. “There will be a before and an after October 16 as a teacher: for the first time, a teacher is attacked for what he teaches”, testified Lionel, a history-geography teacher from the neighboring town of Herblay.

The pupils are also very affected, like Marie, currently in second and coming in front of her old establishment to lay flowers in “homage to her former teacher”. “I remember his free speech class. We had talked about Charlie, we had made drawings which are still hanging in the college, ”explains the young girl, moved.

The assailant, killed by police after the attack, was identified as Abdoullakh A., an 18-year-old Chechen Russian, born in Moscow and who fled to France with his family, said the national anti-terrorism prosecutor, Jean-François Ricard. .

Known for a background in common law but not intelligence services for radicalization, Adboullakh A. had carried out scouting Friday afternoon near the college, according to François Ricard.

A message addressed to Emmanuel Macron, “the leader of the infidels”, explaining wanting to take revenge on the one “who dared to belittle Muhammad” and the photo of his beheaded victim were found in his phone. They had also been posted on Twitter.

His neighbors painted the portrait of a young man “discreet”, “immersed in religion” for three years. Moscow for its part insisted via its embassy in Paris on the fact that “this crime had nothing to do with Russia”, the young man having left the minor country. His parents, his grandfather and his younger brother were arrested in Evreux (north-west) during the night from Friday to Saturday. Seven other people were also arrested, including a father of a college student.

These were the details of the news Terrorism: Assassinated teacher: protests expected in France for this day. We hope that we have succeeded by giving you the full details and information. To follow all our news, you can subscribe to the alerts system or to one of our different systems to provide you with all that is new.