Decapitated professor: Who is the Franco-Moroccan Islamist Abdelhakim Sefrioui in custody? 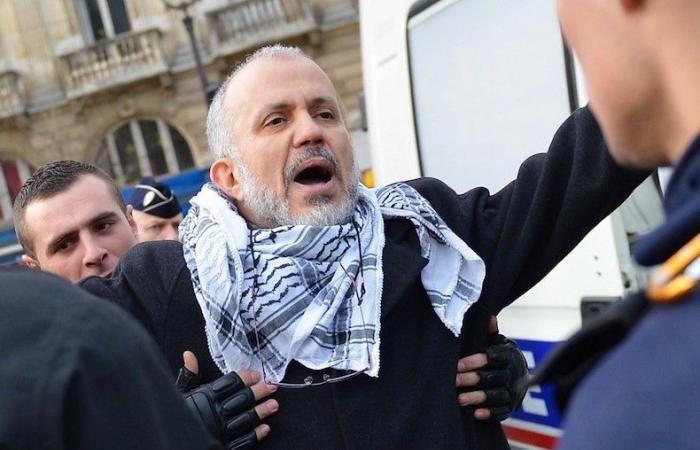 Abdelhakim Sefrioui, Franco-Moroccan cog in the case of the beheaded professor. AFP

Islamist activist well known to the French intelligence services, the one who presents himself as “member of the Council of Imans of France” played a role in the process which led to the beheading of the history professor

A very active Franco-Moroccan Islamist activist, Abdelhakim Sefrioui, is one of ten people in police custody as part of the investigation into the beheading in France of history professor Samuel Paty in Conflans-Sainte-Honorine.

Arrested in the morning of October 17 in Évry with his companion, Sefrioui had accompanied in early October to the Bois d’Aulne college in the commune of Yvelines, the father of a student to request the dismissal of the victim, who had shown caricatures from the Prophet Muhammad to his students.

Introducing himself as “member of the Council of Imans of France”, Abdelhakim Sefrioui, had broadcast a video a few days ago on Youtube in which he denounced the professor.

“His CV reveals a profile of a seasoned Islamist activist. Alternately imam, vehement associative, bookseller, support of Dieudonné, preacher, agit-prop expert and virulent anti-Zionist activist, since the beginning of the 2000s he has been a part of all the demonstrations defending from near or far a radical vision of Islam “, written Marianne.

Originally from Morocco where he was born in 1959, Sefrioui would have French nationality. It appears in intelligence radars at the beginning of the 2000s, in Essonne. As president of the cultural association of Muslims in Ulis. he is the leader of a community protest tending to have the mosque project initiated by the municipality reviewed. His wife claims in several publications as a French convert to Islam who accompanies her in most of her public actions.

Abdelhakim Sefrioui is an Islamist activist active in the Paris region since the end of the 1980s. He also created the pro-Palestinian collective Cheikh Yassin, whose name is a reference to the founder and religious guide of Hamas, killed by the Israeli army in 2004. At the head of this radical group founded in 1992, and of which he was treasurer, he was notably the organizer of demonstrations hostile to the imam of the mosque of Drancy.

In 2004, he led actions in the rue Jean-Pierre Timbaud in Paris, reputed to be a bastion of rigorist Islam, in favor of “The freedom of women to wear the veil”.

In 2006, Sefrioui prefaces a book by Imam Youssef Qaradhawi, the thinker of the Muslim Brotherhood.

It is found in another case in 2010 alongside the conspiratorial site Alter-info, sued in court for anti-Semitism. During the trial opposing two members of the Cheikh Yassine collective to Imam Chalghoumi, a fully veiled woman who was sitting in the audience was excluded from the room. Something to provoke the activist’s ire: “This woman was excluded like a filth, saying that she is not one of the citizens who have the right to justice in this country”, he said, before concluding: “All of this sets the tone for what will happen in the future”.

Sefrioui had tried to put pressure in 2011 on the principal of the Saint-Ouen high school (Paris region) who then wanted to impose in her internal regulations the end of long skirts. He claimed that the Muslim community was stigmatized and then pretended to be the uncle of a school student.

In July 2014, he participated in pro-Gaza protests in Paris, chanting slogans in praise of Hamas and Islamic Jihad.

These were the details of the news Decapitated professor: Who is the Franco-Moroccan Islamist Abdelhakim Sefrioui in custody? for this day. We hope that we have succeeded by giving you the full details and information. To follow all our news, you can subscribe to the alerts system or to one of our different systems to provide you with all that is new.