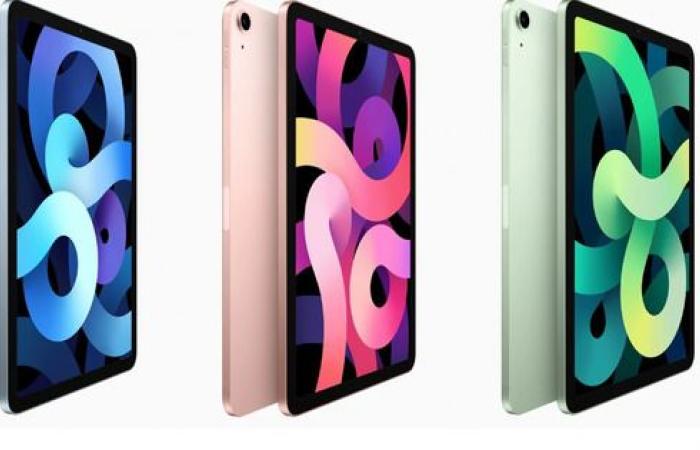 After it was announced last September without revealing its launch date, Apple finally today introduced the iPad Air 2020 tablet for pre-order in many countries around the world, along with the iPhone 12 and iPhone 12 Pro.

As a reminder, iPad Air 2020 gets an all-new design that clearly takes inspiration from the iPad Pro Series lineup. The screen frame is smaller, and the Lightning port has been phased out in favor of the USB Type-C port, although in the box you get a 20W charger.

The new iPad Air 2020 keeps the same dimensions as the previous generation of almost the same device, but due to the small screen frame, this new tablet got a 10.9-inch Liquid Retina screen with a resolution of 2360 x 1640 pixels, and the Touch ID fingerprint sensor was also transferred to a button Run on the side.

This processor includes six cores in total, two high-performance cores to handle the most complex tasks, and four intermediate cores to handle the least complex tasks. According to Apple, it has been reported that the new Apple A14 Bionic processor improves performance by 40 percent compared to the previous generation iPad Air. Moreover, it includes a graphics processor that is 30 percent faster.

The new iPad Air 2020 also supports WiFi 6, features two speakers, and supports the Apple Pencil stylus, which is attached magnetically to the side of the device for pairing, charging and storage. Apple will also provide a floating keyboard for this tablet.

The new iPad Air 2020 is running on iPadOS 14 and will be available in silver, gray, gold, green and blue colors.

These were the details of the news Apple is finally offering a pre-order iPad Air 2020, and it... for this day. We hope that we have succeeded by giving you the full details and information. To follow all our news, you can subscribe to the alerts system or to one of our different systems to provide you with all that is new.

PREV Up to IOC to decide if Russia competes, head of Paris Olympics says
NEXT Hands off Africa, says Pope Francis in Kinshasa speech