Conflans attack: who was Samuel Paty, the martyr professor 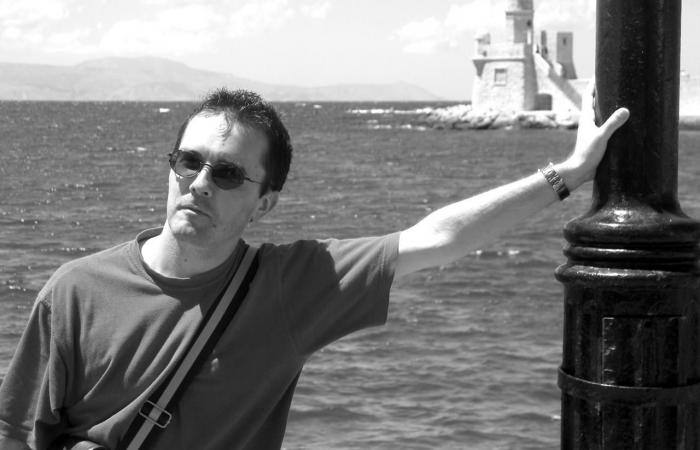 The photo is in black and white. We see the mountain, the sea. And a man whose gaze, protected by sunglasses, fixes the horizon far. In this youthful photo, Samuel Paty is not yet 47 years old. He is not yet the professor who aroused a huge wave of emotion in France, after being savagely killed in front of Bois-d’Aulne, the college of Conflans-Sainte-Honorine (Yvelines) where he taught history. and geography. He is not yet the victim of an 18-year-old Chechen kid who came to assassinate him for the sole reason of having given a course on freedom of expression, during which he showed caricatures of Muhammad.

It is a former classmate, when Samuel Paty was still living in Lyon (Rhône), who posted the photo on social networks. Tributes, he has everywhere and in particular in front of the establishment of Yvelines. From 9 a.m. this Saturday, dozens of parents and children were laying flowers there.

On the ground, a cloud of light roses, thoughts, candles but also signs: “JeSuisSamuel” “Je suis Prof”, in reference to “Je suis Charlie” and the freedom to debate that he was trying to instill in His students. “Our son had this teacher who was very attentive to his students,” says Olivier, who arrived hand in hand with his partner Olivia and their two children. For the couple, the night was rough, after a “very long” discussion with their teenager, who, for his part, remains speechless. How to react when the unthinkable happens in his college?

“Monsieur Paty” as the students call him, lived ten minutes away, in the small town of Eragny (Val-d’Oise). For over a year, he had made his mark in the residential area of ​​Le Grillon. He lived on the second floor of a small building with his 5 year old son. But this Saturday, the apartment is empty of any occupant. The shutter, white, completely closed. “There is no one, confirms his only neighbor on the next floor. I believe his partner no longer lives there. “They had been separated for several months,” confirms Dhaou, the manager of the Au Coeur des Petits Pains bakery where Samuel took his bread every day. I knew them well, they are adorable especially their little boy. “

“I have not slept all night, it’s terrifying”, engages a neighbor “returned” to the idea that the victim was beheaded in the middle of the street and photographed by her assailant, to put her fatal trophy on Twitter . “I can still see this gentleman who was there a few days ago unloading the shopping from his car with his little boy,” she confides. He was a discreet but very good person, he always said hello. I think he was a little shy, and he looked younger than his age. “

Discreet, it is certainly one of the adjectives that comes up the most when you ask those who knew him to describe the forty-something. “Anyway, when he was outside his class. Once inside, he was very present and very frank ”, specifies Mickaël Rouyar, who was his student from 1999 to 2001, before becoming in turn a professor – but he, of economic and social sciences (SES). Samuel Patty was then a very young teacher. He had spent his History and Geography Capes two years earlier in Lyon after a course marked out: a preparatory class for the grandes écoles, the Lumière Lyon 2 University, then the IUFM in the capital of Gaul.

He wanted his students to debate

After his assignment in the Paris region, he arrived in Meaux (Seine-et-Marne), at the Pierre de Coubertin high school. Mickaël Rouyar is then a bubbling high school student. “I had started to get angry with a comrade two years older than me who had ostensibly taken my place. He had channeled me, had rounded corners, pacified the tensions. But it is especially his lessons that he remembers. The one on the French Revolution has not left him. And those of moral and civic education (EMC).

“He organized debates between us, where invective was not allowed and where everyone had to work on their arguments. At the time, we talked about the PACS, the decriminalization of cannabis, parity. It may seem far away today but in the early 2000s, it was a precursor. Twenty years later, after having traveled through several establishments in Seine-et-Marne, it was still within the framework of an EMC that Samuel Paty wanted to talk with his 4th of Bois d’Aulne about the caricatures published by Charlie Hebdo. A week later, the death threats received were carried out. The teacher was found dead, mutilated, a stone’s throw from the establishment where he had been practicing for five years.

“He was not the type to add fuel to the fire”

“I participated in class councils with him. His interventions were rather balanced and he did not speak to say nothing. He was not the type to add fuel to the fire, ”clarifies Myriam Moire, member of the federation of parents of FCPE students. “He was righteous, just, and convinced that education could change people. He wanted to open the minds of his students so that they would not give in to obscurantism, but always with kindness and humor ”, wrote to us by SMS one of his former colleagues from l’Arche Guédon in Torcy (Seine-et-Marne), because on the telephone the voice loose, shaken by tears.

“I have no doubts about the precautions he took to avoid hitting. His desire was to educate without shocking, “says David Brunet, another former colleague at the Lafayette high school in Champagne-sur-Seine, who is already thinking of a collection” to show the family that we are there. “

Outside of his school hours, the rather short but “athletic” 40-year-old loved to hit the ball on the tennis courts. “He had just registered for the third year but just for leisure this time”, says the president of the Eragny club, Didier Colasson. And another licensee to add: “He participated in activities to keep the club alive. He came to play a lot, two or three times a week. On Monday he was still there, in the field… ”At Le Grillon, more than Samuel, it is his son who is known to everyone. “An exceptional little one,” they say here. “He’s a very endearing boy who looks a lot like his father,” says Augustino, a regular at the local café. Sometimes they would come to have breakfast here on weekends. »A ritual cut down by barbarism.

These were the details of the news Conflans attack: who was Samuel Paty, the martyr professor for this day. We hope that we have succeeded by giving you the full details and information. To follow all our news, you can subscribe to the alerts system or to one of our different systems to provide you with all that is new.