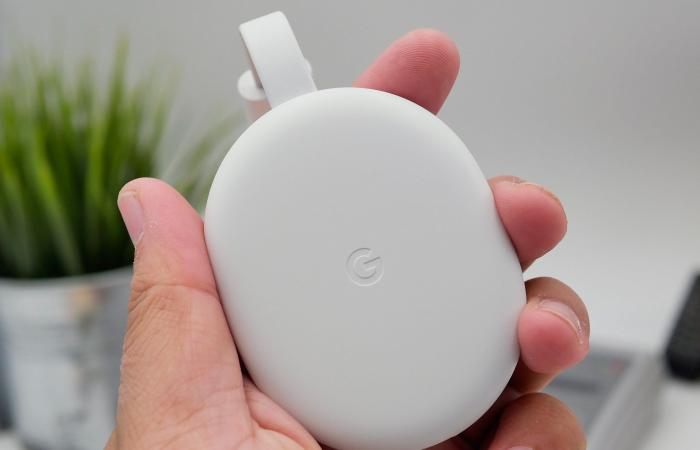 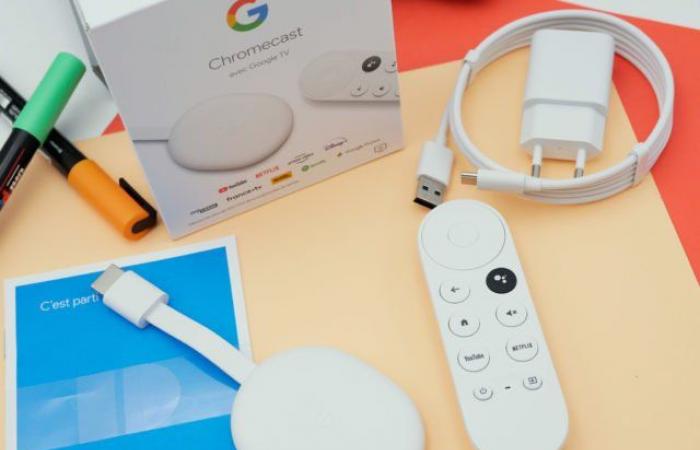 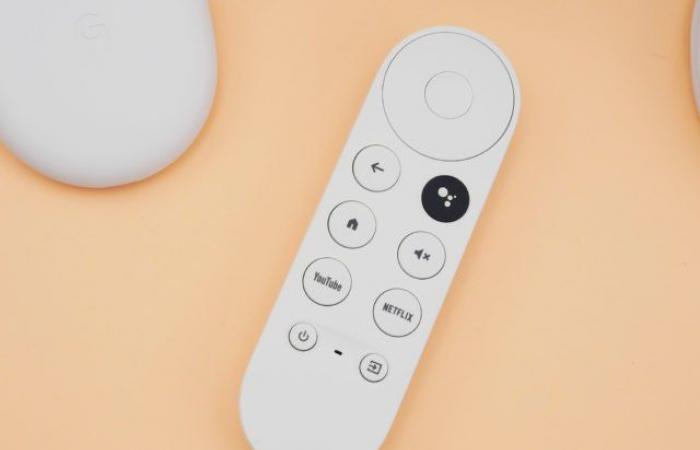 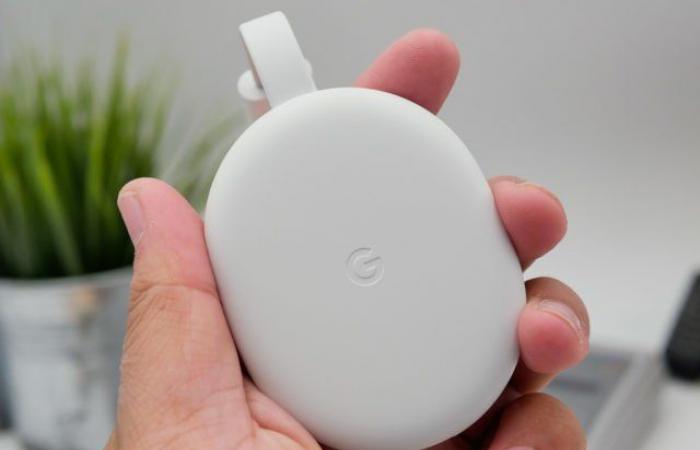 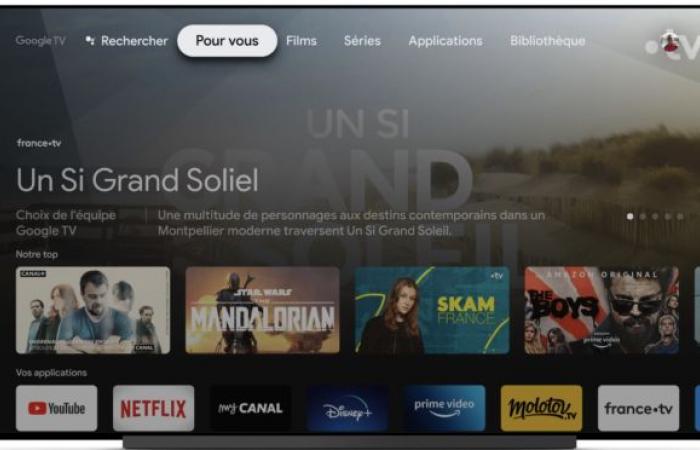 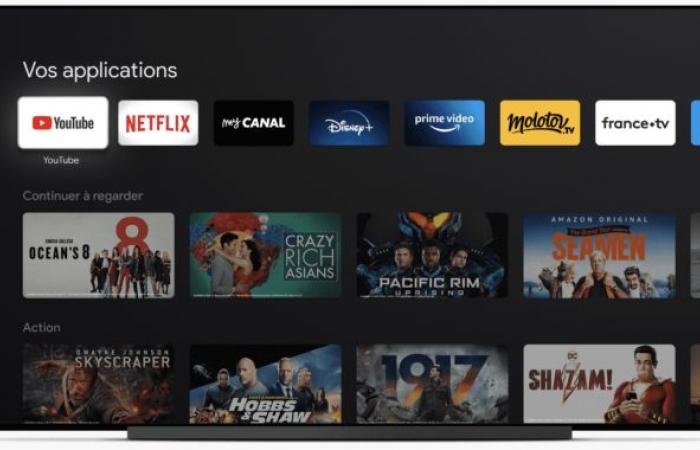 This year, Google is offering a brand new Chromecast that is no longer limited to streaming content from your smartphone. With Google TV, the Mountain View firm enters the world of TV boxes. Here is our review of the Google Chromecast with Google TV.

After a bunch of rumors, it was on September 30, during its online event, at the same time as the Pixel 4a 5G and Pixel 5, that Google had finally announced its new Chromecast.

Available today, the new Chromecast with Google TV comes with a remote control, two AAA batteries for the latter, a USB-A charger, a USB-C to USB-A cable and instructions for first use. This new Chromecast is available in several colors (white, pink and blue) at a price of 69.99 euros. A special Netflix edition is also on the menu at a price of 109.99 euros which includes Chromecast and 6 months of Netflix subscription (standard two-screen package, for a total value of 71.94 €).

We will also have noticed that there is no longer an Ethernet port on the Chromecast. Indeed, the Ethernet port has been deported to an optional sector charger at 19.99 euros. Please note, no Gbit / s, this is a 10/100 Mbit / s Ethernet port only. 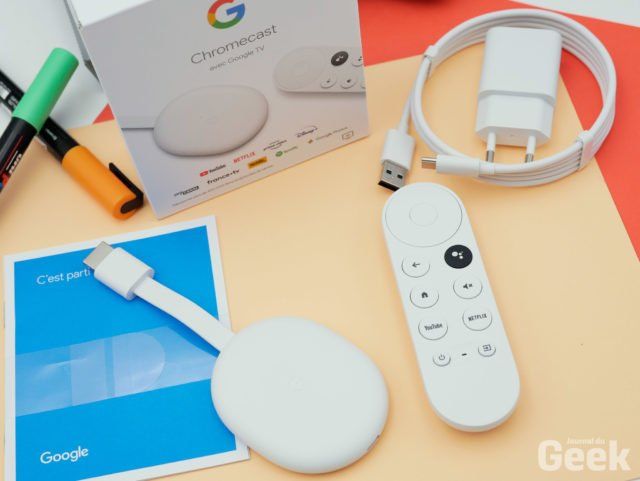 White in color for our test model and with a design reminiscent of accessories for Pixels such as the Pixel Stand, this new Chromecast is similar in size to previous Chromecast. There will be a USB-C port on it for charging and a small LED to indicate that it is on. With an integrated HDMI cable, the Chromecast can be connected directly to the TV. Obviously, you will need to connect the Chromecast to its charger to power it. So, on the connection side, it’s super simple and there weren’t really any surprises. 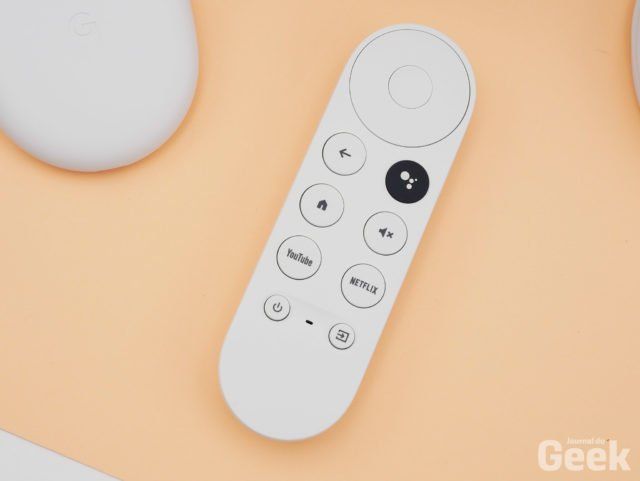 The new Chromecast obviously takes over the functions we already knew (namely to broadcast the content of compatible Android and iOS applications directly from his phone, laptop or tablet, as well as the tab of his Chrome browser on the TV). But the big news is the integration of Google TV and the arrival of an IR / Bluetooth remote control in the colors of the Chromecast. The remote’s Bluetooth connection will be used to connect and control the Chromecast while the IR port will be used to possibly control the TV to which the Chromecast is connected with basic functions such as turning the TV on or off, or even the volume control. Note on the remote control a button dedicated to Google Assistant, a button dedicated to Youtube and a button dedicated to Netflix. To date, it is not possible to change anything.

Once everything is plugged in, configuration, like all Google devices dedicated to the home, is done via the Google Home application (iOS or Android). Again, no surprise, just follow the different steps, enter the WiFi of the house and it’s done.

Once launched and configured, we finally discover Google TV and the first thing we notice is that it’s a kind of Android TV with a cleaner interface and more dedicated to multimedia content. With the latest version of Android TV, we were already approaching the same philosophy. In addition to the more multimedia orientation, the user interface has undergone a small facelift that makes it more modern and clear. 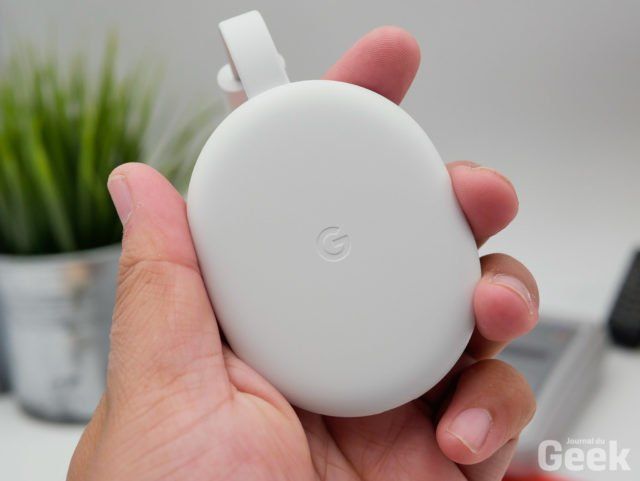 When installing via the Google Home app, we had to choose which apps to install. By default, Youtube, Netflix and Spotify were the basic applications and we could add Molotof, My Canal, Deezer, Disney +, France TV, Youtube Music, etc… We hadn’t paid attention to it because for us, Google TV was a kind of Android TV and suddenly, we were going to be able to install new applications afterwards! 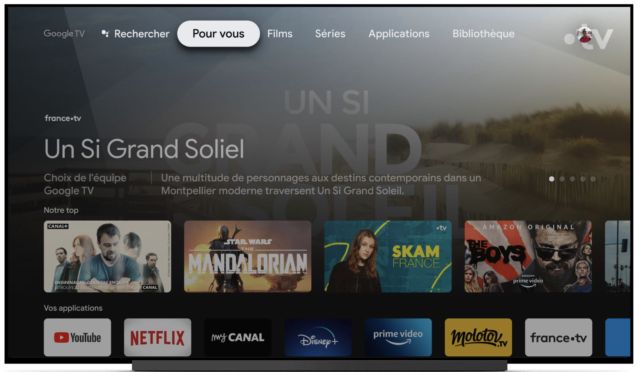 Well no, Google TV is some sort of Chromecast ++ or an Android – -. Indeed, on Google TV, there is no Play Store like on Android TV so we cannot install everything and anything. For once, the compatible applications are listed in the Google Home application on your smartphone and this is limited to applications such as VOD or music. If the user wishes to install applications such as IPTV for example, he will have to go his way. It is a choice and we can see that of Google as a choice on simplicity and control to avoid any overflow.

Once in the interface, no surprise, we navigate in familiar territory, even more for those who have already used Android TV or Amazon Fire devices. The biggest difference is the inability to customize the interface, but with the emphasis on the content of the different applications. It is a sort of curation of everything that the user can have on his applications but also on his Google account. Because Google TV remains very compartmentalized, we haven’t found a quick way to upload your own content. Again, for hackers, Android TV devices will be more suitable. Note all the same that the user interface slows down depending on the content to be loaded, something that we do not see on the Amazon Fire Stick 4K for example. 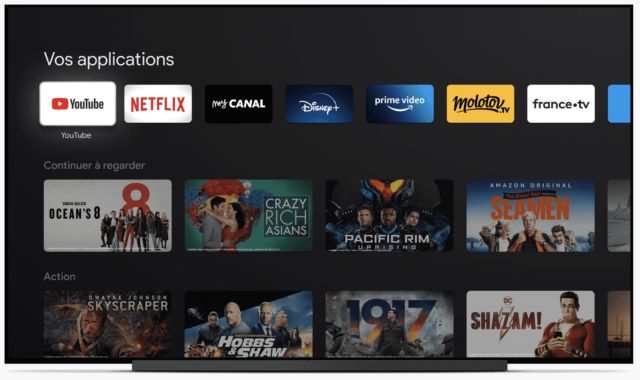 The Chromecast with Google TV obviously supports 4K HDR and one of Google TV’s strengths over Android TV will be the recommendations based on its content but also the integration of Google Assistant. We remind you that the remote control has a dedicated button for and a microphone. With the power of Google, if you are looking for content, the Chromecast is able to tell you whether the program you are looking for is part of your subscriptions or not. In the latter case, Google will still be able to tell you where to find it and through which service. Convenient.

When the Chromecast is on standby, we obviously find the screensavers based on your photos or on generic photos. Classic. In terms of functions, no Stadia client per se, Google is talking about support for 2021. But above all, with the release of the new Nest Audio speakers, there is no support for WiFi speakers. Pity.

Where to buy the Google Chromecast with Google TV?

*The article has been translated based on the content of Source link by https://www.journaldugeek.com/test/test-google-chromecast-google-tv/
. If there is any problem regarding the content, copyright, please leave a report below the article. We will try to process as quickly as possible to protect the rights of the author. Thank you very much!

These were the details of the news [Test] Google Chromecast with Google TV, to give Google to your... for this day. We hope that we have succeeded by giving you the full details and information. To follow all our news, you can subscribe to the alerts system or to one of our different systems to provide you with all that is new.