Sign pointing to confrontation during student protests in Bangkok 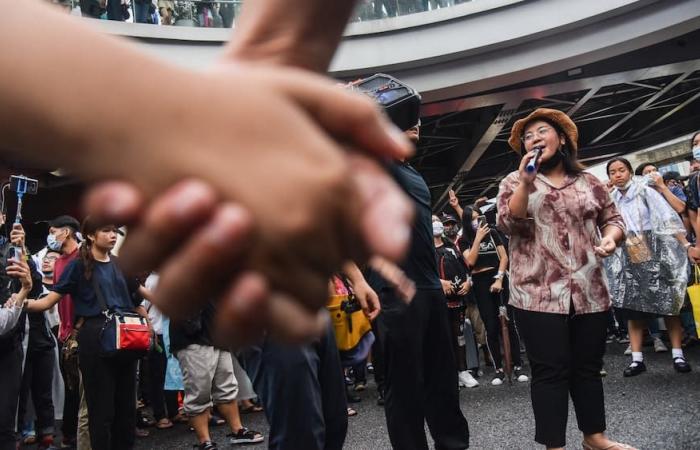 Unequal test of strength in Thailand. The country’s younger generation is taking on the country’s regime and old guard. The protests are still peaceful. The situation can change at any time. At the locations in Bangkok’s downtown, where red shirts and money shirts fought in bloody fights in recent years, Thailand’s young generation is now marching on – and calling for change and a new beginning in the crisis-ridden country.

There has been a double state of emergency in Bangkok since Thursday night. The Thai capital is under emergency law to keep the Covid pandemic in check, and recently under a second emergency law to curb the anti-government protests. Both emergency rights would not serve to protect land and people, writes the Thai news portal “Thai Inquirer”. The rulers resort to strict laws to protect themselves.

But despite the ban on gatherings and the threat of severe punishment, the mostly young opponents of the regime are not intimidated. The arrest of dozens of student leaders, including the intrepid 22-year-old Panusaya Sithijirawattanakul, did not break the protestors’ fighting spirit.

Generation Z, born in the late 1990s, has only known coups, protests and military governments during their lifetime. Girls still have their hair cut short at school, but there is a sharp drill in class. A video from the education authority on how young people should behave humbly in front of older people recently only caused mockery and ridicule among Thai youth.

The young generation in Thailand can no longer suppress the desire for change since their party performed unexpectedly high in last year’s elections. The party of an oppositional young entrepreneur immediately became the third largest force in the country! But the generals found a way to ban the party on flimsy grounds.

Students, who are also joined by schoolchildren and numerous older government opponents, are calling for the resignation of coup general Prayuth Chan-Ocha (66), who has been in power since his coup in May 2014. The protesters also want a new constitution that can no longer be controlled by the uniformed men. And they are calling for reforms in the royal family – a demand that was unthinkable a few months ago. They do not want to abolish the monarchy, but they want to create transparency in an institution that seems to have remained in a different era.

The silent majority in the country is watching the impending escalation in Bangkok with concern. The corona crisis is biting hard enough. A political crisis alongside the economic one threatens to derail the country completely. The government appeared to create an excuse on Wednesday to crack down on the demonstrators, as speculated on social media in Thailand.

A convoy with Queen Suthida (42) was specially driven through the ranks of demonstrators, although a different route had been agreed. The demonstrators let the convoy pass without resistance. The Queen also looked out of the window in amazement while the demonstrators held out three fingers – a symbol from the film series “The Hunger Games” and an expression of democratic protest. King Maha Vajiralongkorn (68) was not in the limousine.

Hours later, the government proclaimed emergency law because the queen had been threatened. This is despite the fact that images show no aggression on the part of the demonstrators. On the contrary, they opened a swath for the convoy. When the emergency law was proclaimed, the rulers invoked an old law that, according to Thai media reports, was last used under the young king Rama VIII, who ruled from 1935 to 1946.

The alleged arbitrary justice in the country and incompetence of the government drive more and more people into the camp of the government opponents. Thailand, a former tiger nation of Southeast Asia, is considered to be the backlight of the region after years of mismanagement by the generals.

According to observers, last year’s elections were by no means fair. For example, a distribution key for seats was subsequently changed in order to benefit the regime party. Now the nation follows with a trace of amusement as the protesters play cat-and-mouse with the police.

On Friday, hundreds of police units secured Ratchaprasong, where a protest was supposed to take place as on the previous evening. According to the plan, there should not be a second exposure of the surprised security forces. But the demonstrators literally left the police standing in the rain. In the pouring monsoon, the opponents of the government simply gathered at an intersection further in Pathumwan, while the uniformed guards protected an empty intersection. They later moved forward and used water cannons – water that demonstrators said was chemical and stinging in the eyes. The crowd chanted shouts against the prime minister with “hia”, a Thai version of the F-word. The same spectacle is to be repeated over the next few days – until one side gives way.

Which side gives in first?

“One side has to give way,” said the renowned political scientist Thitinan Pongdushirak in an interview with “CNBC”. The young generation only knows military governments and stagnation. The easiest way for the government to respond to the students’ call for resignation, after which Prime Minister Prayuth resigns. But even this seems highly unlikely. The signs point to confrontation.

Prayuth promised to take up the thorny issue of royal reforms next month when parliament is in session again. But the government opponents no longer trust the many reform promises made by Prayuth, which are soon forgotten. In addition, the Thai House of Representatives is a paper tiger. Without a constitutional amendment, the opposition will remain paralyzed. So the regime parties can count on the Senate. He has to confirm important decisions – and is handpicked by the regime.

These were the details of the news Sign pointing to confrontation during student protests in Bangkok for this day. We hope that we have succeeded by giving you the full details and information. To follow all our news, you can subscribe to the alerts system or to one of our different systems to provide you with all that is new.