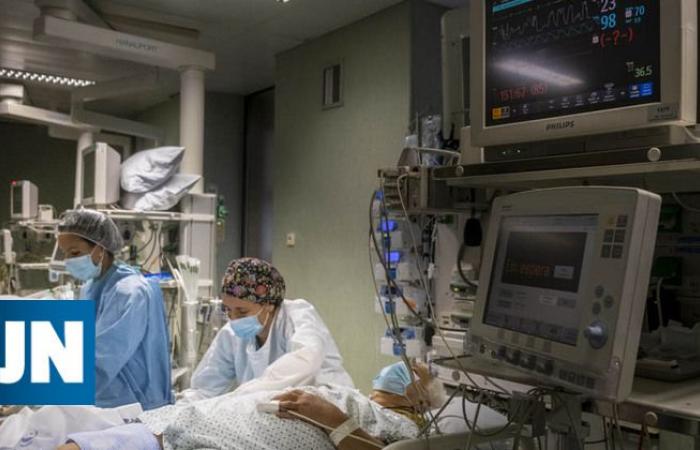 There are 21 more deaths from covid-19 and a new record of infections by the new coronavirus – 2608. In the last 24 hours, 985 more patients have recovered and hospitals have hospitalized more than 1,000 people.

It is the third day in a row with more than two thousand cases reported per day. And always going up. After 2072 on Wednesday, 2101 on Thursday, Friday is black, and shows that the three thousand barrier could be overcome.

According to the daily bulletin of the Directorate-General for Health (DGS), more than 2608 cases of covid-19 were identified in the last 24 hours in Portugal, with the cumulative total exceeding 95 thousand infections – 95912.

In terms of mortality, the numbers go back to April data, at the peak of the first wave of the pandemic: the 21 deaths recorded in the last 24 hours are only surpassed by the records before April 27, almost six months ago. In total, the pandemic has claimed 2149 lives in Portugal since 2 March, when SARS-CoV-2 was officially identified in Portuguese lands.

Ten of the fatal victims lived in the North Zone (ZN), the most affected by the pandemic, with an accumulated 953 deaths, for a total of 37157 infections, counting the 1350 of the last 24 hours, in what is the second consecutive day with more thousand cases registered in the northernmost part of the country.

Nine of the fatal victims were from the Lisbon and Tagus Valley Region. There are now 866 lives translated into numbers of deaths since the beginning of the pandemic, which has already affected 46,246 people, 725 of whom were registered as positive cases in the last 24 hours.

The other two fatalities recorded in the last 24 hours had a life history in the Centro Region, which has already lost 277 people to the new coronavirus. In total, the disease has affected the lives of 7,834 souls, 323 of whom in the past 24 hours, in line with the general trend of rising infections in the country in the past two weeks.

The remaining regions of the country, according to the organization of the DGS bulletin, recorded no fatalities. In the Alentejo, 150 more cases were recorded, the outbreak in a home in Beja will not be unaware, bringing the total to 1914 positive, with 26 deaths in total.

Further south, growth was slower, with the Algarve adding 44 more cases of covid-19, for a total of 2072, maintaining the same 21 deaths.

In the islands, the growth of infections in Madeira stands out. After months below the total of 100 cases, the “Pearl of the Atlantic” crossed the barrier of 300 infections, with 317 in total (plus 12), surpassing the records of the Azores, which added four more infections, to an accumulated of 310 cases.

In the Azores, data on deaths have not changed since 12 May, while in Madeira there is no recorded death.

Of the lives lost to the pandemic added to the statistics this Friday, 20 were admitted to hospitals and one resided in a home, said the director-general of Health, at the joint press conference with the Ministry of Health, this Friday.

According to Graça Freitas, 15 men and six women died, although the bulletin records 14 men and six women in the age groups, missing one of the fatal victims, for the total of 21, only surpassed by the numbers before April 27.

These were the details of the news 21 more dead and new record for coronavirus infections in Portugal for this day. We hope that we have succeeded by giving you the full details and information. To follow all our news, you can subscribe to the alerts system or to one of our different systems to provide you with all that is new.