Another fire in Valencia: Geoffrey Kondgobia explodes against Anil Murthy 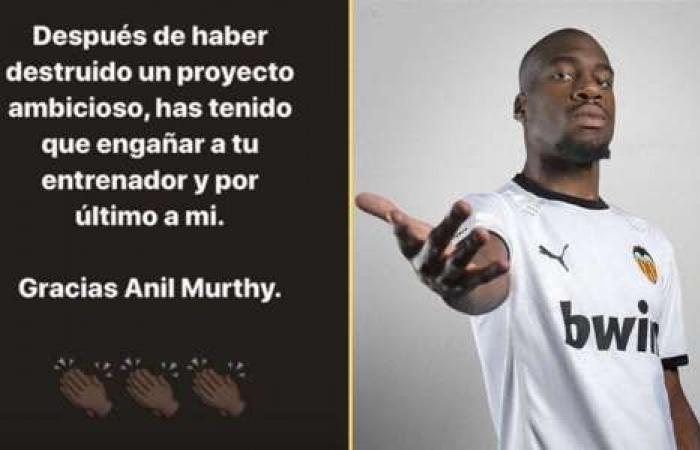 The Central African accuses Anil Murthy of torpedoing the project, deceiving the coach and also lying to him

“After having destroyed an ambitious project, you had to deceive your coach and finally me. Thank you Anil Murthy”. This is how Geoffrey Kondogbia, a Valencia CF player, has reported on his social networks against his president. The Central African accuses the president of torpedoing the project by selling players, also of deceiving coach Javi Gracia because he promised reinforcements that have not arrived and finally, he lets it fall that he has also deceived him. Among other things, because Kondogbia’s harsh reaction suggests that the president would have promised to leave the club if an offer came.

In the last hours, according to various media in Valencia, an offer from Atlético de Madrid would have arrived three days after the market closed, since the Atlético team has an extra month to sign, since they lost Thomas Partey because another club paid its release clause. Apparently, the offer of the rojiblanco team consisted of an assignment with a purchase option. Kondogbia wanted to leave but the club has refused and has referred to its clause, which amounts to 80 million euros and will be lowered on January 1 to 25.

The monumental anger of Kondogbia is the last fire of a club that lives installed in the permanent inormative storm. This weekend the team plays against Villarreal and we will have to be very attentive to how the ‘Kondogbia case’ evolves.

*The article has been translated based on the content of Source link by https://www.goal.com/es/noticias/otro-incendio-en-valencia-geoffrey-kondgobia-explota-contra-anil-/cr7j1hauatgy1e4gzuqpqjqzn
. If there is any problem regarding the content, copyright, please leave a report below the article. We will try to process as quickly as possible to protect the rights of the author. Thank you very much!

These were the details of the news Another fire in Valencia: Geoffrey Kondgobia explodes against Anil Murthy for this day. We hope that we have succeeded by giving you the full details and information. To follow all our news, you can subscribe to the alerts system or to one of our different systems to provide you with all that is new.