Announce the discovery of a new geoglyph in the Pampa de... 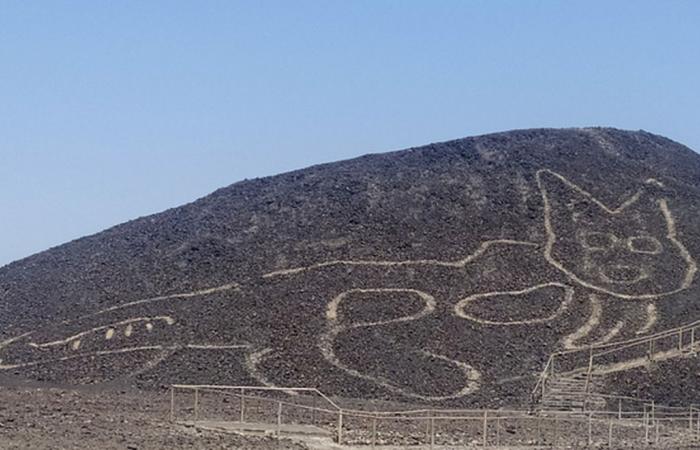 The Ministry of Culture reported that, in the midst of the remodeling work carried out in the Natural viewpoint, in the Pampa de Nasca, archaeologists and the technical personnel in charge of these tasks, managed to identify a new figurative geoglyph, corresponding to a feline, which had been drawn on one of the slopes of this hill.

Through a statement, it was indicated that the figure was barely visible and was about to disappear, since it is located on a fairly steep slope and due to the effects of natural erosion.

In this sense, it was highlighted that in the last week the geoglyph was cleaned and preserved, which shows the figure of a feline with the body in profile and the head facing the front.

Well defined strokes They are 37 meters long seen horizontally and, according to its stylistic features, it dates from the Late Paracas period. It is prior to the famous figures of the Nasca Pampa, dating from 100 to 200 years before our era.

The Mincul maintained that representations of felines of this type are frequent in the iconography of ceramics and textiles of the Paracas society.

Finally, with this discovery, once again, the rich and varied cultural legacy that the area harbors, which is also within the area inscribed on the World Heritage List of the UNESCO.

“In this way, even in times of pandemic, personnel from the Ministry of Culture contribute to research, conservation and tourism development in the region, particularly in the Nasca province,” the document reads.

About the Natural Viewpoint

The Natural Viewpoint corresponds to a rocky hill that is located in a section of the Nasca Pampa, at km 426.4 of the South Pan-American Highway. It has that name because, around it, there are numerous straight lines of different width and length (geoglyphs), which can be seen from the top of the hill. It is one of the largest Line Centers in the Pampa de Nasca.

These were the details of the news Announce the discovery of a new geoglyph in the Pampa de... for this day. We hope that we have succeeded by giving you the full details and information. To follow all our news, you can subscribe to the alerts system or to one of our different systems to provide you with all that is new.