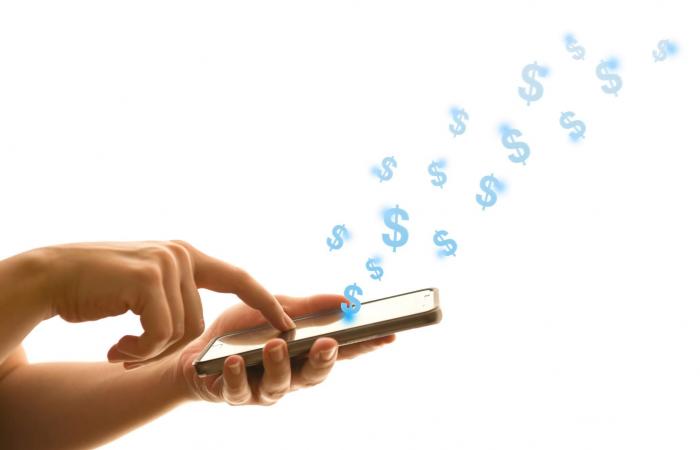 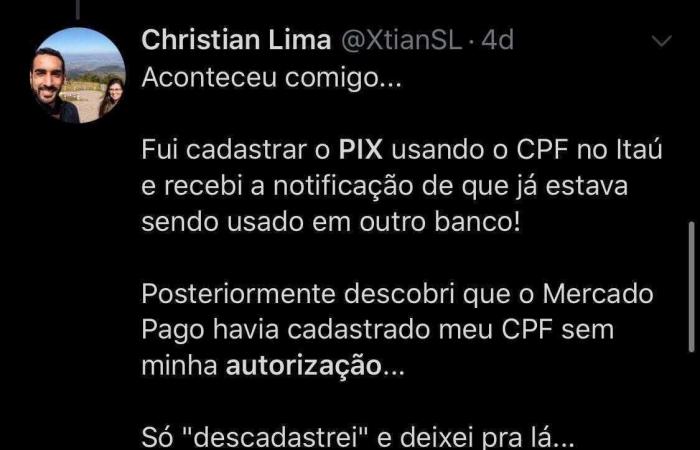 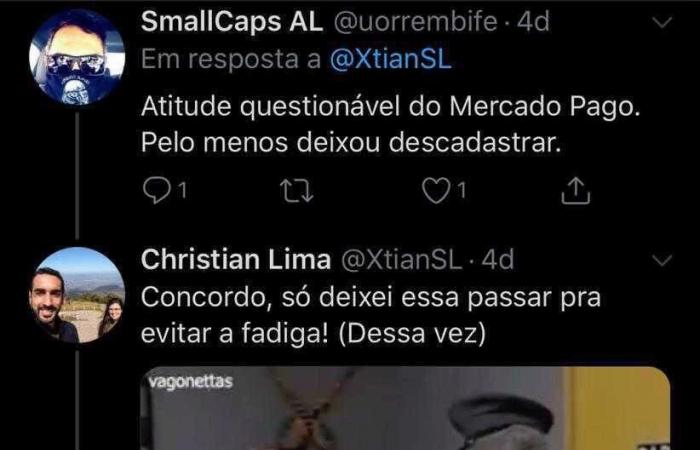 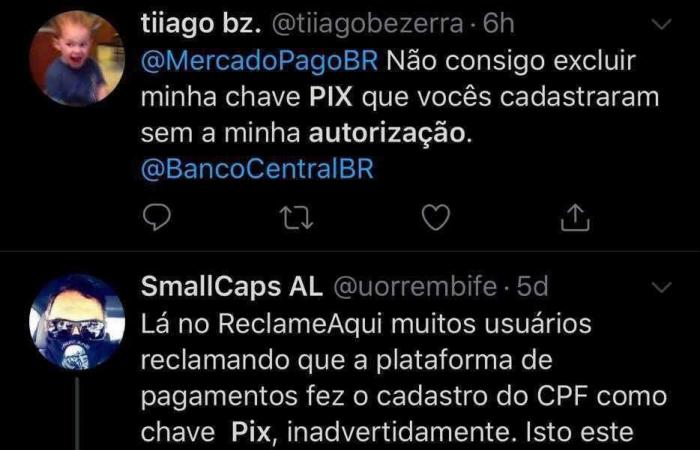 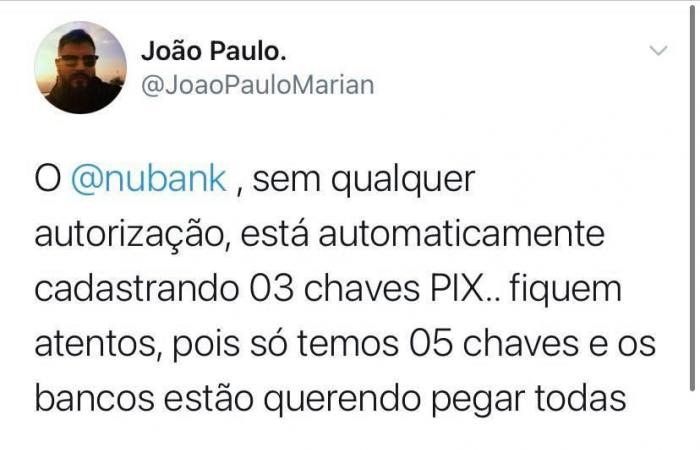 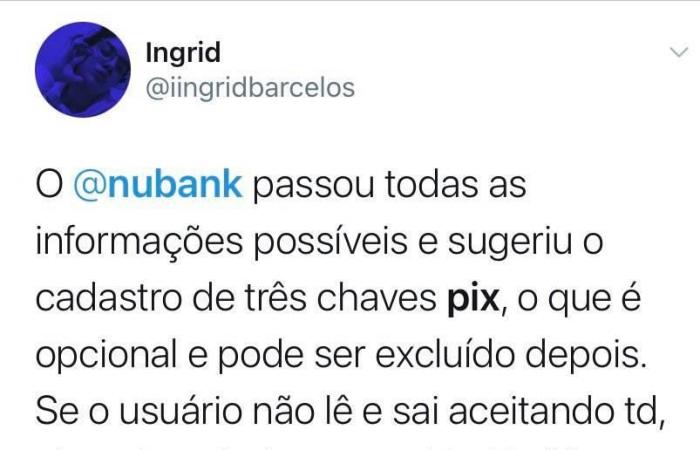 SÃO PAULO – The registration of Pix, the new instant payment system of the Central Bank, started on October 5 and in recent days customers have reported that some financial institutions are compulsorily registering Pix keys, without asking for authorization from Pix. client.

On Twitter, several users have shared posts in the past few days about similar situations. They say that the institution has registered one of the Pix keys, which can be the CPF / CNPJ, cell phone, e-mail or random key, without their consent and say that they only realized that trying to register that same key in another bank.

The most cited financial institutions were Nubank and Mercado Pago. In some cases, users comment that they also had difficulty deleting the registered key.

On the ReclameAqui website there are also complaints about Pix keys and reports about the difficulty in canceling the registration at the institutions mentioned.

“[Mercado Pago] You registered my CPF at Pix without my authorization, and now you can’t delete it. There is always an error message, ”said one user. Another said: “I would like to know how Mercado Pago registered my PIX key without my consent. I did not authorize the registration of the key nor did I make any pre-registration. I’m trying to delete my CPF as a key and I’m not getting it ”.

On Wednesday (14), the BC released the list of institutions with the most keys registered and precisely Nubank and Mercado Pago took the first two positions. The country’s major banks, such as Bradesco, Itaú and Santander, which have millions more customers than the two fintechs, did not perform as relevantly as digital competitors in attracting customers.

Despite reports of mandatory registration by customers, experts believe that the success of fintechs with Pix is ​​due to the more incisive approach and greater appeal of these institutions to small business owners, who will have less operating costs when joining the new system (learn more on here).

See some of the reports: 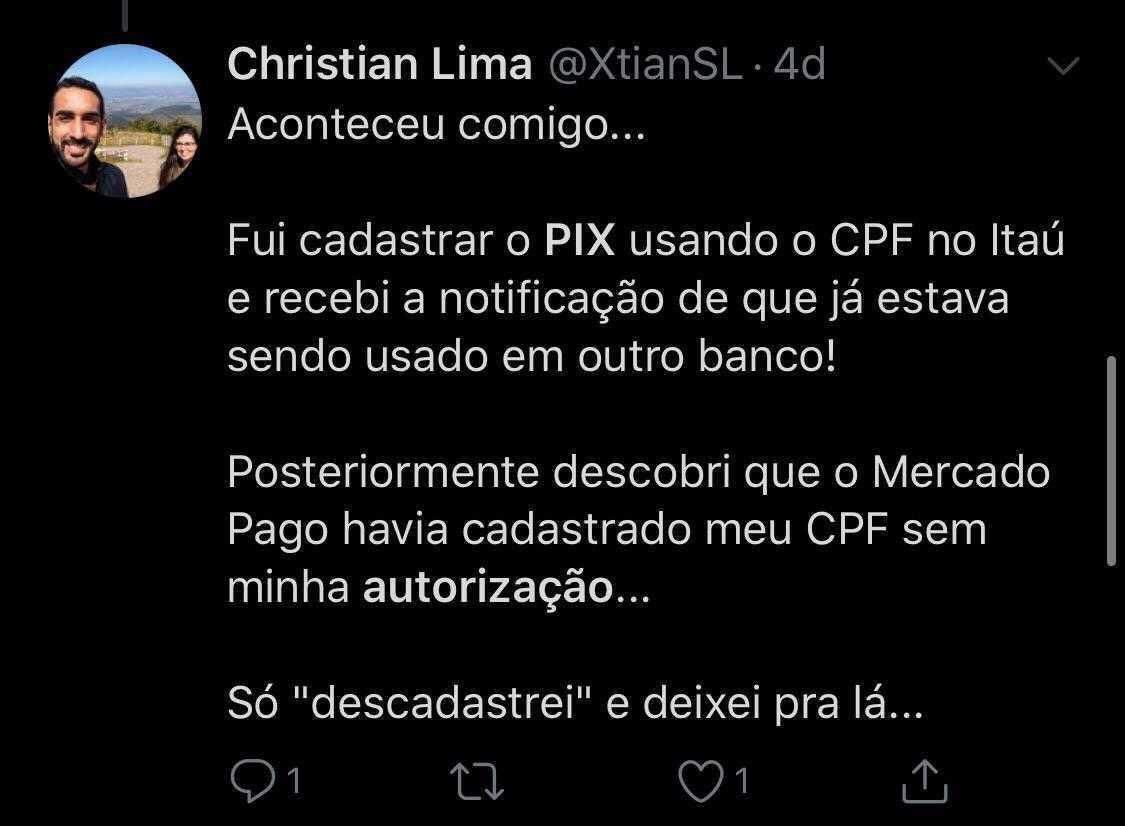 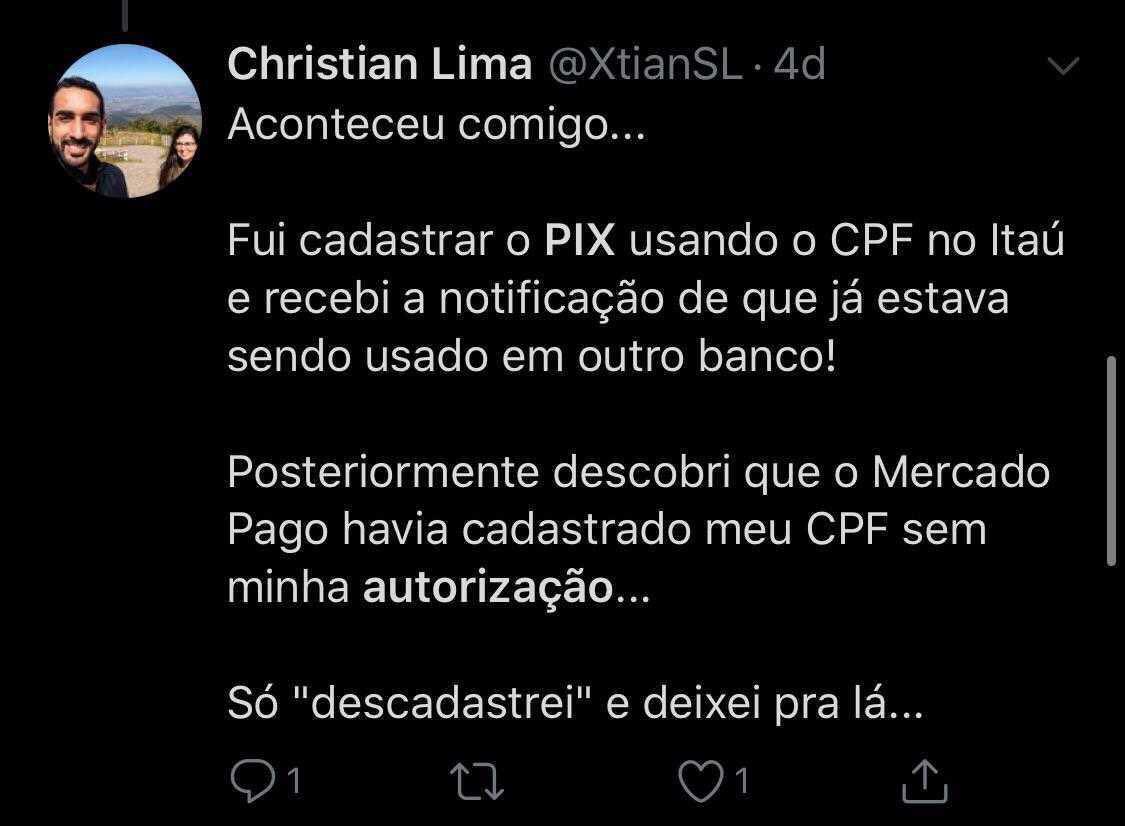 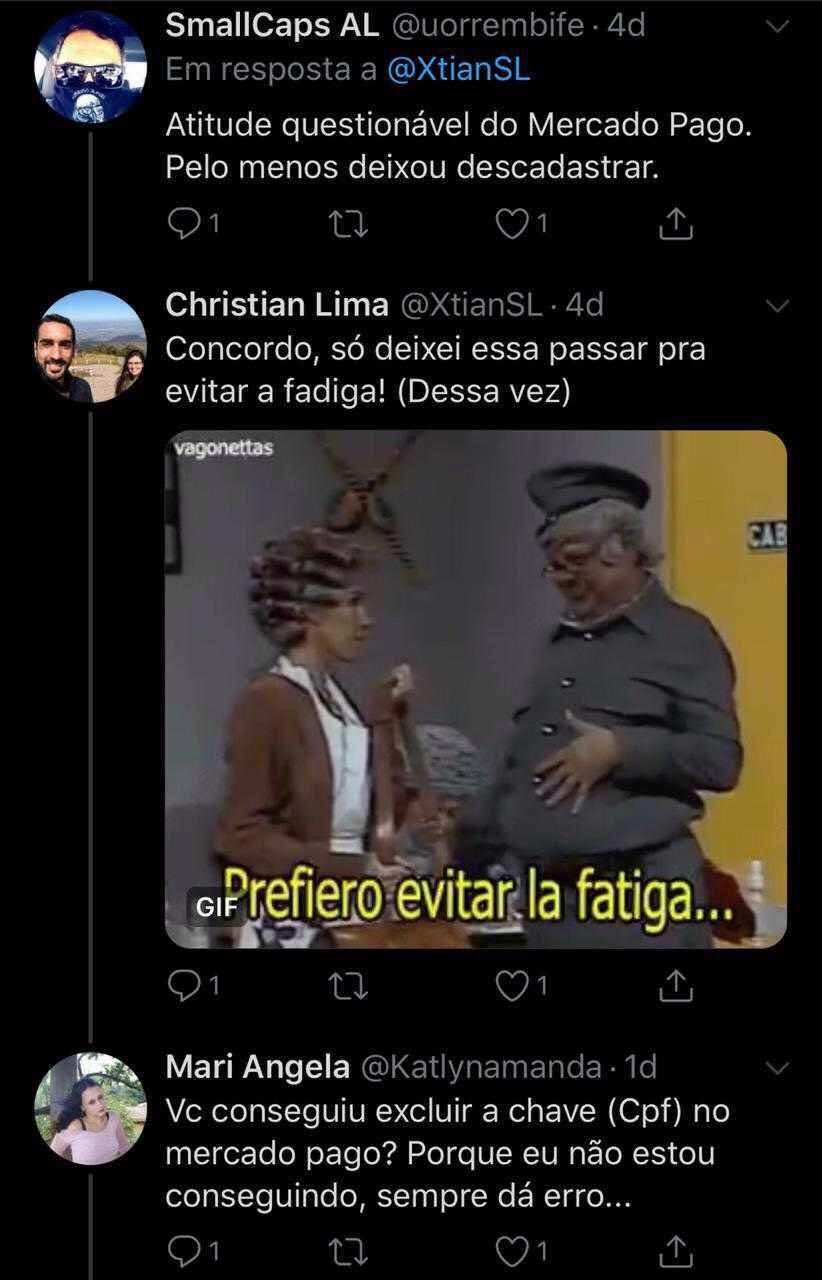 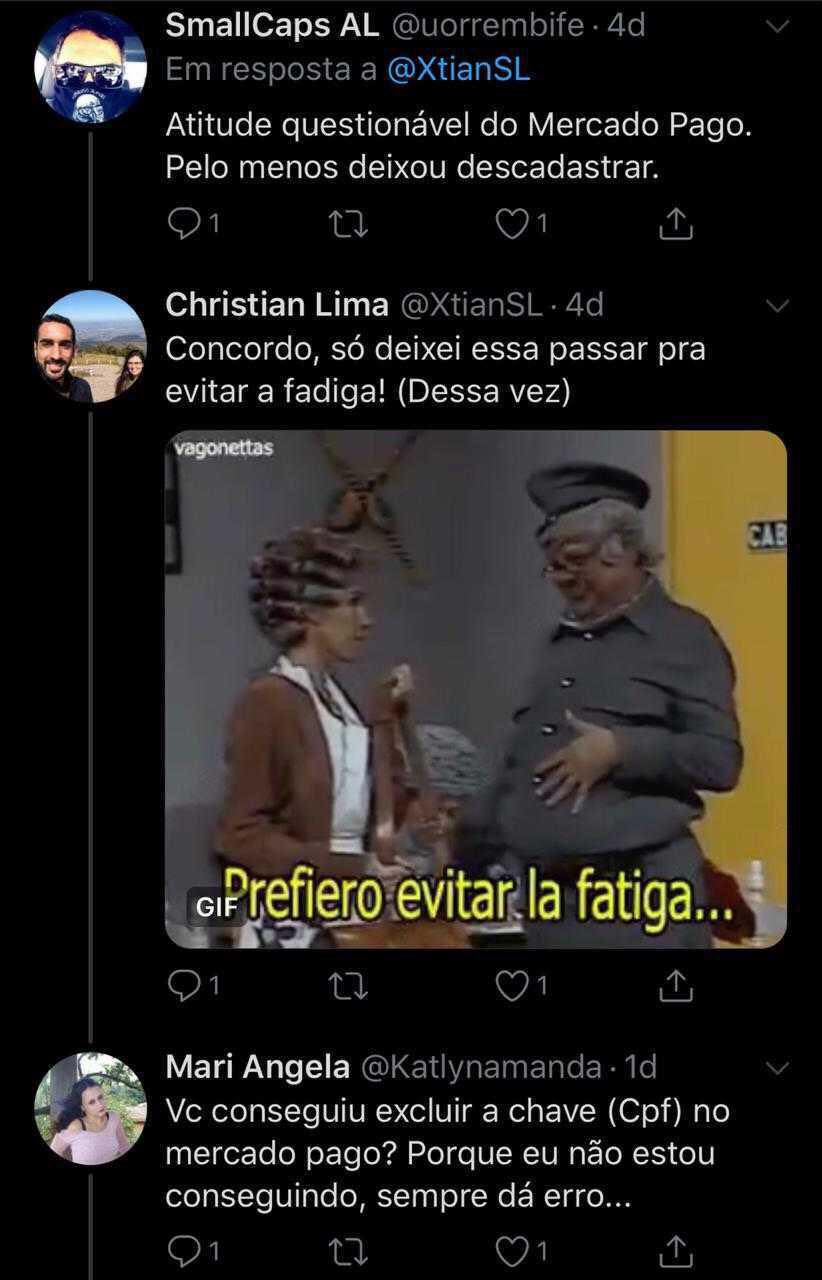 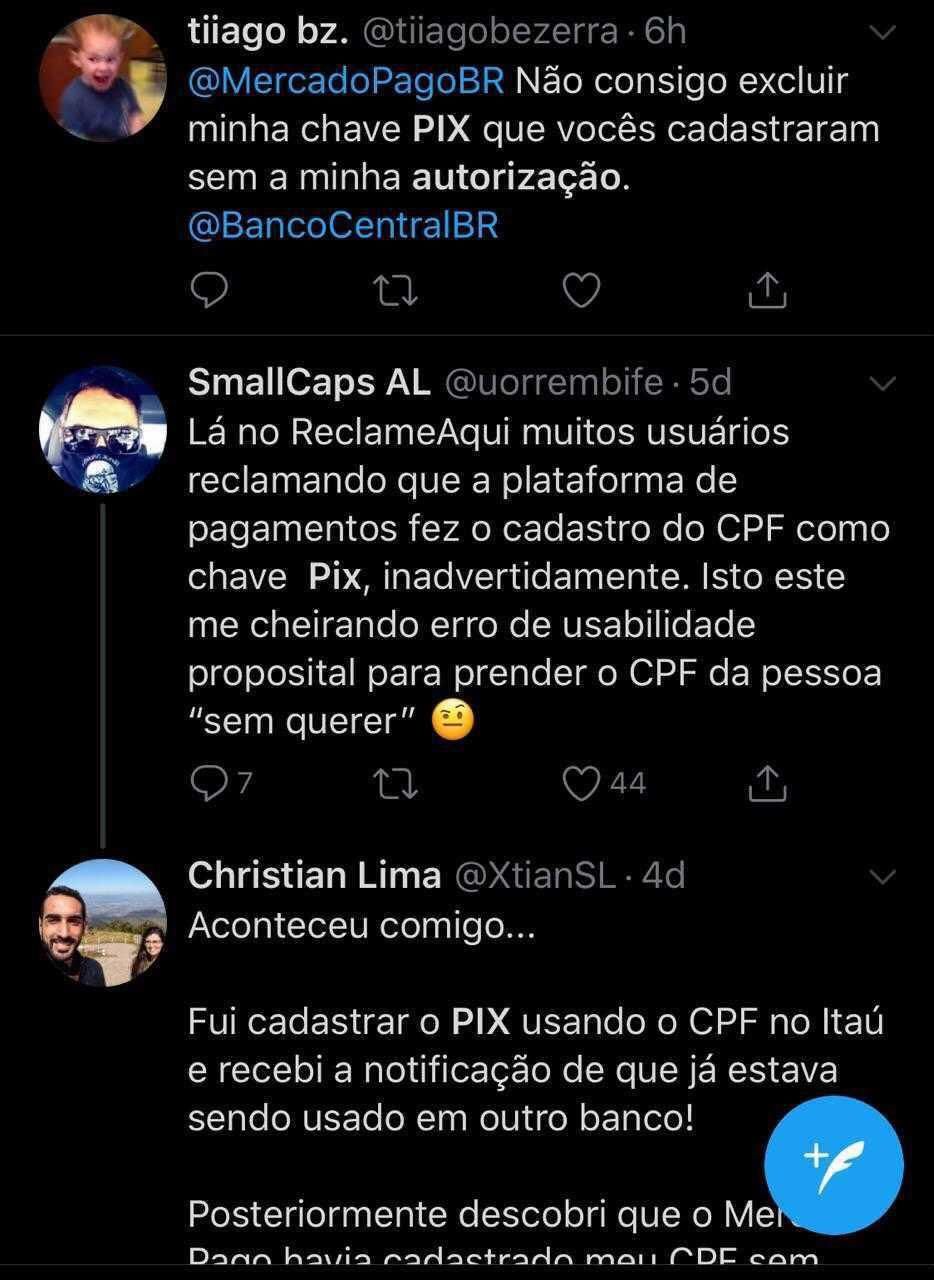 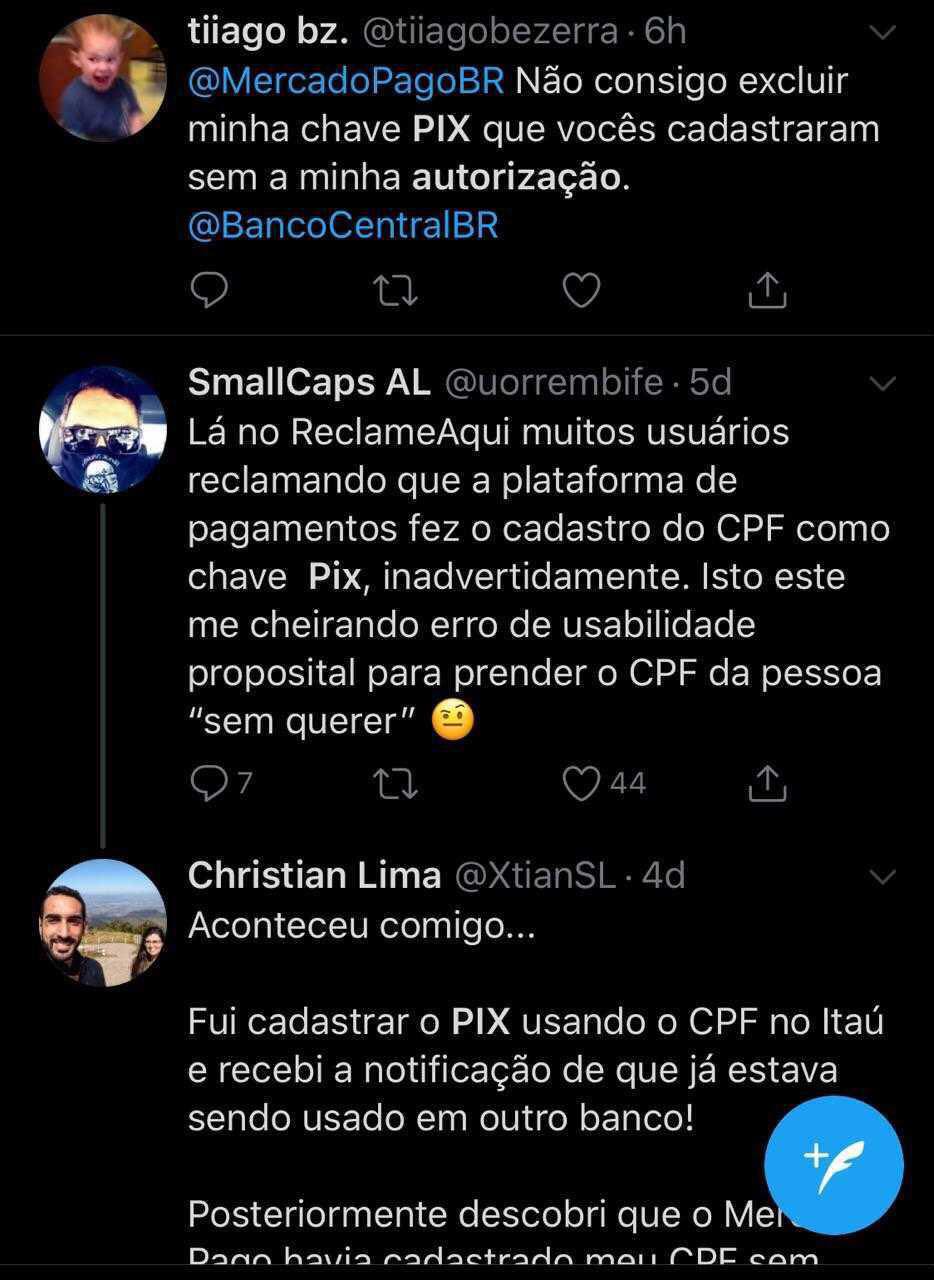 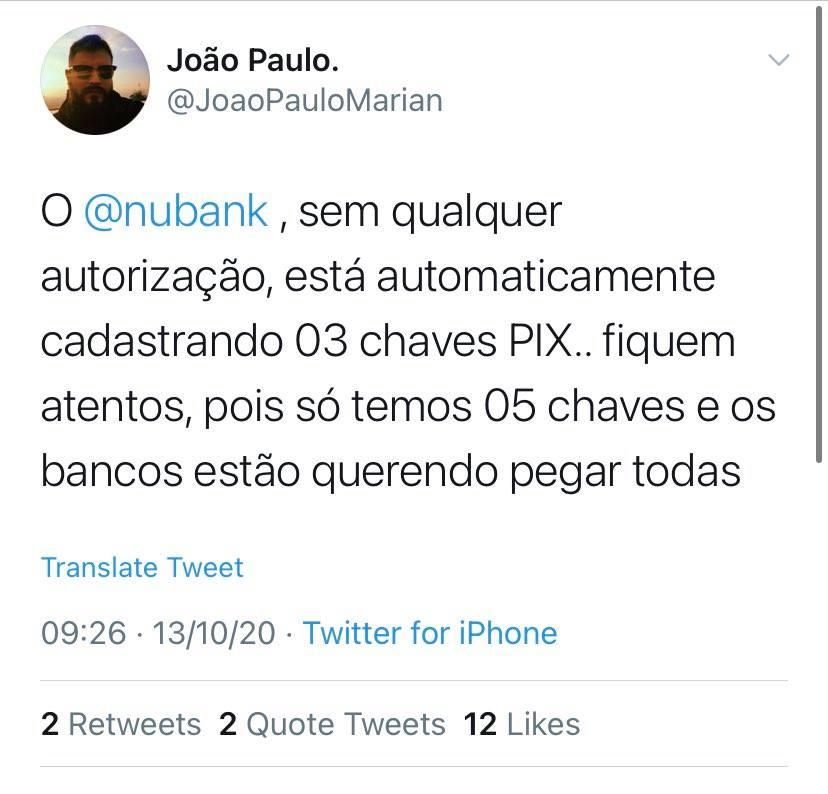 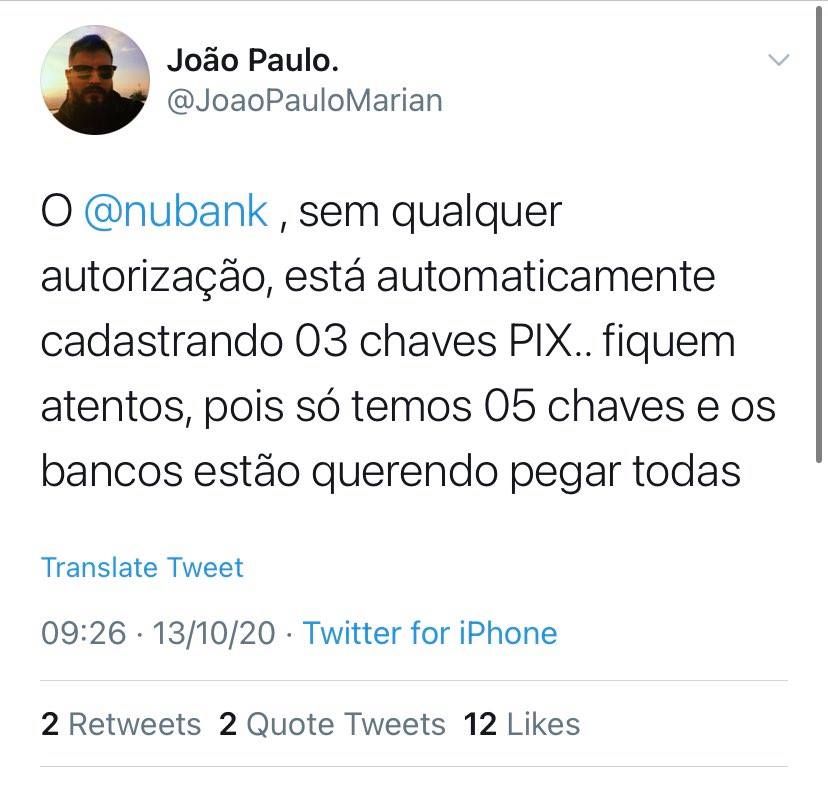 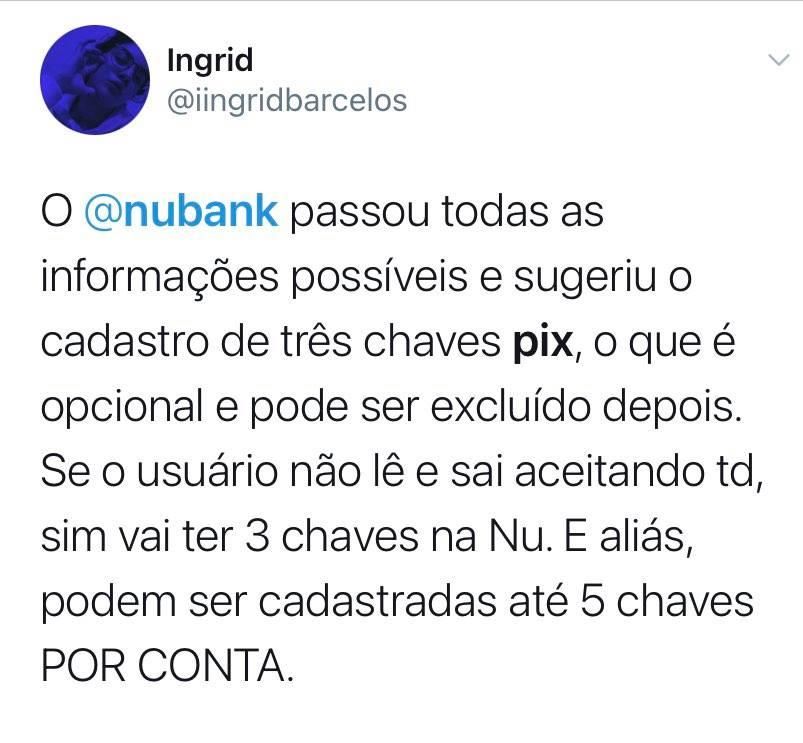 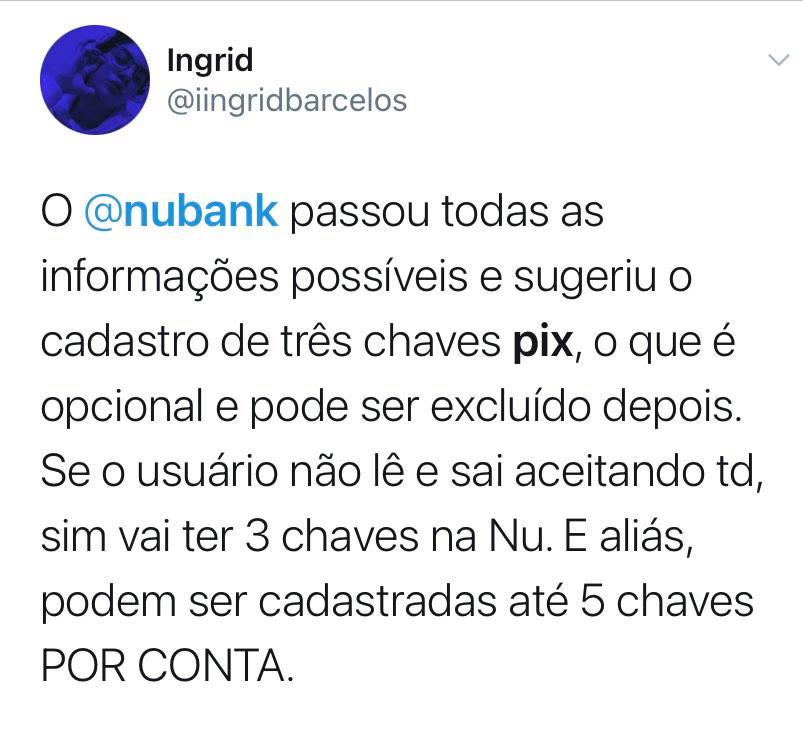 THE InfoMoney contacted Nubank and Mercado Pago. The companies denied any kind of registration without the consent of the customers and said that the procedure for inclusion in Pix is ​​done only with the authorization of the customers.

“Mercado Pago does not register a Pix key without the user’s consent. The registration flow involves sending a communication through the Mercado Pago application, informing the possibility of registering the e-mail keys, CPF / CNPJ, so that the user can choose which ones to register. The company also makes the ‘Register Pix keys’ button available on the main screen of the application, from which it is possible to manage Pix keys, and the user can even include or exclude his keys whenever he wants ”, explained fintech.

Nubank, in turn, reported that “all keys have been registered with the proper authorization from customers”. “We carefully prepared a practical and simple communication flow and, on October 5th, we sent a request for consent via the application to all customers who had pre-registered”, says the note.

In a note released to the press, the Central Bank informed that it continuously monitors and supervises the process of registering Pix keys and that it has already started the formal processes for inspecting participants. “If it detects irregularities in these processes, including any improper registration, the Central Bank will punish violators under the terms of the current regulation,” he says. The monetary authority did not give details on how this inspection will work.

At ReclameAqui, users also report difficulty canceling the Pix key on Nubank. “I can’t cancel Pix keys in the app [do Nubank]. In all banks I managed to adjust the registration of keys, except for Nubank, which is pending and has no option to cancel. I request intervention to regularize the keys. I intend to keep only my phone ”, he says.

Nubank explained that to delete a key, the user must enter “my keys” and select “delete”. “Then, just enter your four-digit password and confirm the operation. It will no longer appear as one of those registered. Then you can add it again if you wish, ”said the bank.

Mercado Pago reported that if the user has any problem deleting the key, simply access the website www.mercadopago.com.br/ajuda through the desktop or in the application and click on “contact us” where you can contact us by chat or email or by calling 0800 637 7246 ..

The reports about Pix keys on Twitter and in ReclameAqui that mention other institutions have more to do with the difficulty of deleting the key registration, than with the improper registration.

THE InfoMoney contacted PagSeguro, Bradesco, Banco do Brasil, Caixa, Santander, Itaú, Inter and PicPay to understand how key deletion procedures work in each case. Until the moment of publication of this article, the companies that sent their positions were Pic Pay, Itaú, Bradesco and Banco do Brasil.

In Pic Pay, to delete a Pix key in PicPay the user must access the app, click on “Pix”. Then, in “my registered keys” it is possible to request the deletion and the user needs to confirm the act.

“The addressing key is excluded from 9 am to 6 pm, Monday to Friday. If the user requests after this time, they will have to wait for the next business day, leaving the status ‘request pending’ in the app. Then, when the process is completed, you will receive a notification by email and by the application itself, ”said the company in a note.

Bradesco only informed that it offers on its digital channels the possibility for its customers to register and delete their Pix keys “within a simple and intuitive journey”.

Banco do Brasil, in turn, explained that to delete a key, just login to the app and click on “Pix”, then on “my keys”. Once this is done, you will need to select the key and click on “delete”.

To InfoMoney the BC only reiterated that “the key registration is only done regularly with the client’s active consent”. Questioned, the monetary authority did not clarify if there is a breach in the system that allows this compulsory registration or if the registration becomes invalid if it is done without the client’s authorization.

Marcos Zanini, CEO of Dinamo Networks, a company specializing in digital identity security and cryptography, explains that, from a technical point of view, bank systems would allow registering customer keys without prior authorization, but believes that banks should not adopt this posture.

“It is not that there is a resource in the system that prohibits institutions from doing this. For example, if institution A wants to register the CPF or cell phone of one of its clients in the system, it could do so without requiring a client’s authorization, provided that this CPF has not already been registered by any other bank. But the BC’s recommendation is that there is the client’s consent and I don’t think that financial institutions would risk doing this knowing that they can be punished ”, he says.

So he believes that what may be happening is confusion on the part of users. “Most fintechs are offering all possible Pix keys at once at the time of registration. They list the available keys and the customer can choose to register all or choose only one. What may be happening is a confusion at this moment of selection. Suddenly, the user does not read the text carefully, register them all on impulse, since the process is simple, and discover only later when he will try to put the key in another bank ”, he explains.

Bruno Diniz, professor of fintechs in the MBA area at USP, also believes that there may have been some confusion on the part of users, but stressed that the BC could have a more active stance in this regard.

“The customer may not have paid attention and registered his main keys at the same institution when he said ‘ok’ in the application. Anyway, I missed a more objective movement by BC in media campaigns clarifying the basics about Pix. With more information, it would be possible to avoid this type of confusion more easily. I was under the impression that there was more effort in communicating the R $ 200 note than in this case ”, he says.

If the user wants to change his institution key, he will be able to port it to the Pix ecosystem when the new system goes into operation, on November 16th. Although the BC has not yet set standards, Zanini says the trend is that it is a procedure similar to that of cellphone or salary portability.

“A user registered the CPF at Banco do Brasil, for example. If he wants to transfer it to Bradesco, he will need to register this same key within Bradesco’s internet banking (or app), asking for portability. Once this is done, you will receive a notification on the BB account to confirm your interest in holding the key to Bradesco and that’s it. This transition can take up to 7 days to materialize. As long as this period has passed, the Pix Key continues to function at BB ”, he says.

InfoMoney Newsletter
Information, analysis and recommendations that are worth money, every day in your email:

These were the details of the news Fintech customers report that they were registered with Pix without prior... for this day. We hope that we have succeeded by giving you the full details and information. To follow all our news, you can subscribe to the alerts system or to one of our different systems to provide you with all that is new.