Trump was seriously considering taking the oath of office for his... 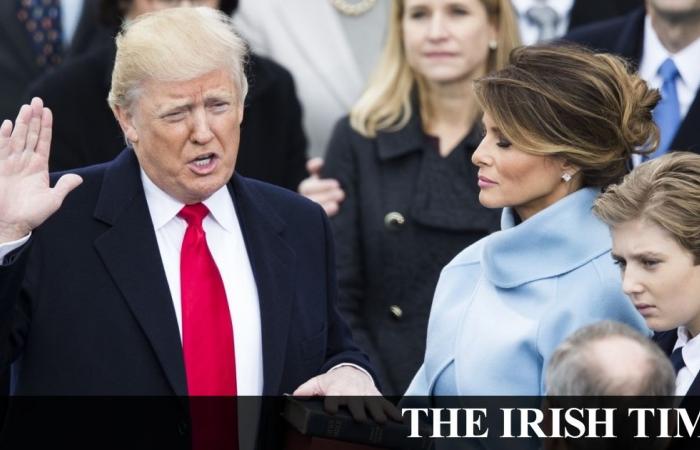 A case can be made for The Trump Show (BBC Two, 9 p.m.) as the most redundant documentary of the year. Isn’t the whole world living the Donald Trump Show, day by day, minute by minute?

Who needs a reminder that we are trapped in the belly of an all-consuming reality TV nightmare?

On top of that, Rob Coldstream’s three-part series can’t possibly tell us something we don’t know yet. Trump is a fanatic control freak? He rules on a whim? His ego is his own four-headed Mount Rushmore of tectonic narcissism?

It’s safe to say that your jaw won’t droop in shock (although it’s interesting to note that the ex-apprentice landlord was overwhelmed by the burdens of the office early in his presidency).

If the Trump Show has a feature, it’s a snappy summary of how awkward the past four years have been. To this end, Coldstream has rallied many of the main characters in this great tragedy and farce and coaxed some satisfyingly indiscreet memories from them.

We are introduced again to Trump’s early consigliere Steve Bannon, who has arrived in the Cloverfield survival bunker phase of his career with long hair and a blank look.

There is also an opportunity to reconnect with Omarosa Manigault Newman of the apprentice, Anthony “The Mooch” Scaramucci and Sean Spicer, White House Press Secretary for Sacrificial Lambs, who was forced more than once to insist to journalists that Black is actually white.

There are few bombs in Part 1 that sum up the first 12 months of Trump’s presidency. Yet Coldstream paints some memorable pictures. Spicer brings us back to the morning after Trump’s inauguration, when the new press secretary watched Barney and Friends with his young children. A phone call from the President prevents him from enjoying a ponderous, nonsensical creature with glowing skin, angry at reports of a meager attendance at his swearing-in ceremony.

And so Spicer has to step onto a podium and exhort the world’s media to publish factually correct images. Almost four years later, he has still not fully come to terms with the humiliation. Equally absurd / horrific is Omarosa’s claim that Trump was seriously considering taking the oath of office for his 1987 bestseller The Art of the Deal.

The first part of the Trump Show ends with the President establishing a bromantic connection with North Korean leader Kim Jong-Un. On the way to the summit, he’s more concerned with how he’ll look on TV than the boring details of Pyongyang’s battle against Washington.

None of this is surprising. And it’s not even so bleakly amusing anymore. With US election day approaching and a Trump victory not unthinkable, the viewer is instead filled with a cold, hard fear. If that was Coldstream’s mission, then he achieved it with ease.

These were the details of the news Trump was seriously considering taking the oath of office for his... for this day. We hope that we have succeeded by giving you the full details and information. To follow all our news, you can subscribe to the alerts system or to one of our different systems to provide you with all that is new.

PREV UAE’s first-ever hotel tells how it all started 90 years ago
NEXT WHO: Number of new global COVID-19 cases rises after long decline