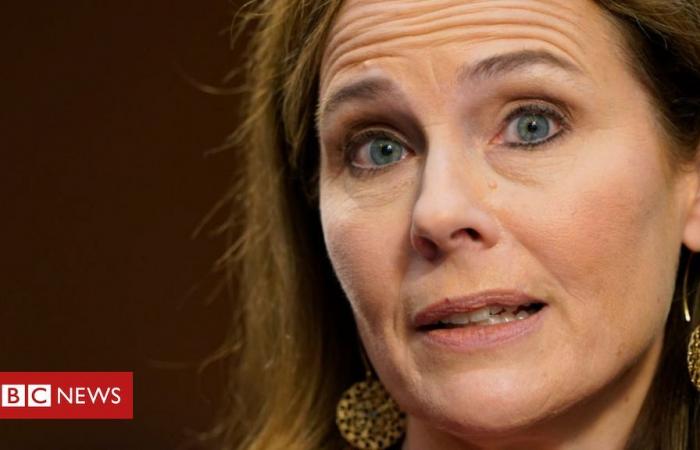 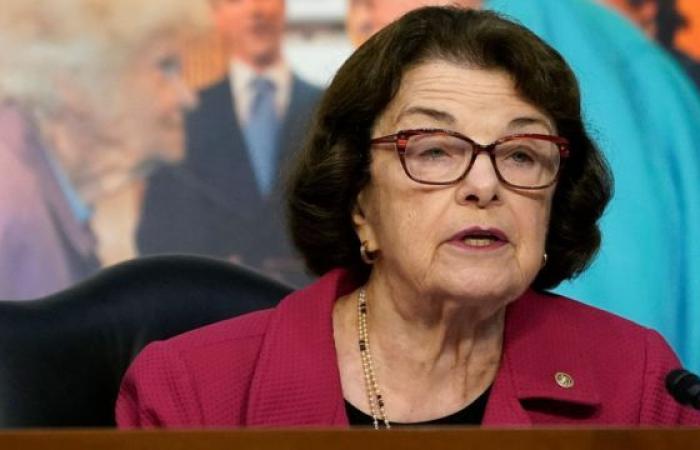 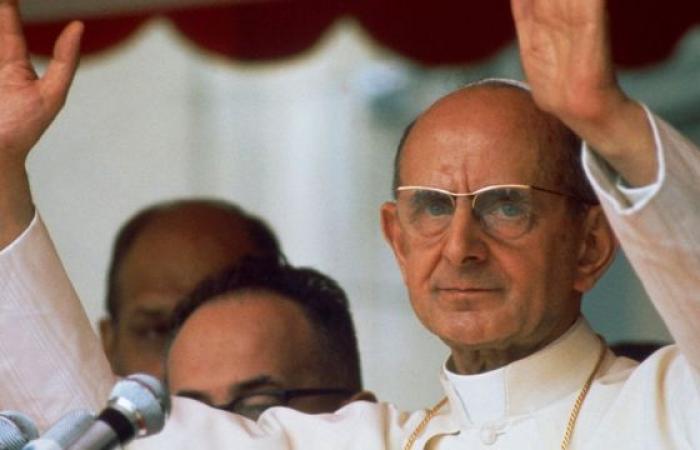 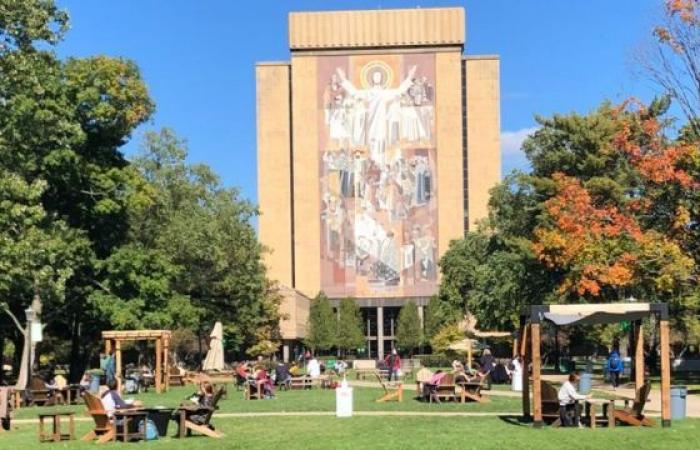 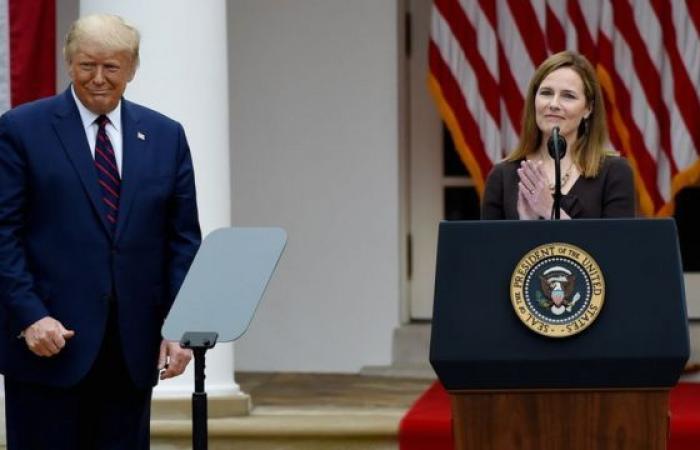 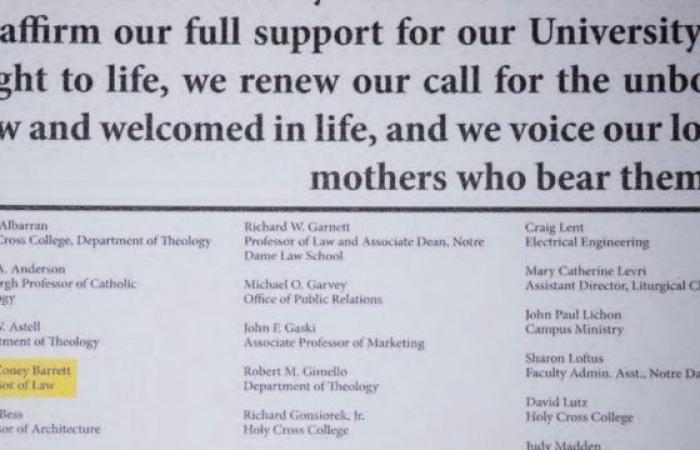 “When you read your speeches, the conclusion you reach is that dogma lives strongly within you.”

With these words, Senator Dianne Feinstein summed up the Democratic legislators’ concern about Judge Amy Coney Barrett, who this week is undergoing confirmation hearings in the United States Congress after being nominated by President Donald Trump as Supreme Court judge .

Feinstein’s phrase, which made direct reference to Barrett’s religious faith and recalled that “dogma and law are two different things”, was not pronounced now, but in September 2017, when she was appointed judge of a Court of Appeal.

The issue resurfaced in 2018, when it was discovered that Barrett’s name was on a Trump list to replace Judge Anthony Kennedy, who retired from the Supreme Court.

In 2017, Barrett, a practicing Catholic, said that if a conflict arises between her personal beliefs and her duty under the law, “I would never put my personal convictions above the law.”

The position was ratified again this Tuesday (10/13) in the Senate.

However, the debate over his stance has not stopped. Because?

The answer lies largely in the fact that his appointment could significantly alter the ideological balance within the court, which would end up being composed of six conservatives and three progressives.

This would also occur at a time when the highest American court is expected to have to decide soon on important and controversial cases on issues such as abortion or the public health Obamacare Act.

People of Praise is a group whose members claim to admire the early Christians “who were guided by the Holy Spirit to form a community”.

Among its distinctive features is the fact that its members believe that they live a bond with the Holy Spirit through experiences that include healing through prayer, the ability to make prophecies and speak in tongues.

Born in 1971 in South Bend (Indiana) in the heat of the so-called Catholic charismatic renewal, he is currently a heterogeneous group, as he is open to the participation of Christians of all affiliations.

With around 1,700 members distributed in 22 cities in the United States, Canada and the Caribbean, the other element that defines the group is to constitute itself as a very united community, whose members assume a pact that leads them not only to sharing faith, but also group life, including material goods, to the point of being seen as a community with inbreeding tendencies, since its members tend to relate and marry each other.

This is precisely the case with Amy Coney Barrett, who grew up in a People of Praise community in Louisiana and later ended up marrying Jesse Barrett, who had also been raised in that community, but in South Bend.

According to The New York Times, the Coney family’s life in New Orleans revolved around this Christian community to the point that, about 35 years ago, Judge Barrett’s father, Mike Coney, decided to resign his job, rejecting a professional promotion that would force him to move to Texas, preferring to stay in Louisiana.

“Our life was a ‘covenant community’ in New Orleans. For the sake of our children and ourselves, we needed committed relationships with other Christians who took their faith seriously,” said Coney, years after an interview for a community magazine cited by the New York Times.

According to the American newspaper, the judge’s father became a member of the National Board of Directors of the People of Praise.

From a belief standpoint, the organization has a conservative outlook on issues such as sex and abortion, similar to that of many other religious groups.

A covenant for life

The degree of interference in common life stems largely from the conception of People of Praise as a “community of alliance”.

Adrian J. Reimers, who was one of the founding members and followed the organization until 1985, considers this a “significant” definition.

“People of Praise sees itself not just as a group of people, but as a people in the cultural and social sense, similar to the people of Israel,” wrote Reimers in a community-critical article published in 1986.

“This would not be simply a community gathered around a group of common beliefs and values, but a people, a clan or group of clans, whose members recognize the existence of a type of family relationship between them and who share customs, government and common belief patterns, “wrote Reimers.

As the organization explains on its website, People of Praise members make a lifelong pact by which they commit to “serve one another wholeheartedly, regardless of the type of need: spiritual, material or financial”.

Its members are encouraged to contribute 5% of their gross income to help finance the functioning of the community.

The pact is freely assumed by adults after a period of reflection that lasts between three and six years; and can be abandoned at any time.

However, Reimers points out in his article that the way in which this pact with the community is assumed implies that it is a commitment that cannot be abandoned without putting at stake one’s own integrity as a person, since this presents itself as one of the pillars of life itself.

“For the People of Praise members, this pact is the determining and central factor in their lives. It is the axis around which spiritual, social and family life is structured,” he said.

One of the most controversial rules of People of Praise is that each member receives a “boss”, a kind of guide that guides him through the countless decisions of his life.

According to Reimers, topics range from the correct way to discipline children, how to manage your relationship with your wife, accept a promotion at work or decide to buy a new car.

In the case of married women, the “boss” is considered the husband himself, which some critics interpret as a sign of machismo, despite the claim that this does not give the husband the right to try to dominate his wife.

Reports from former members of the community to the American press indicate that families tend to be large (like the Barretts, who have 7 children) and women tend not to work.

In the case of the judge, this does not seem to have been a problem and she managed to develop a successful professional career – not despite her husband, but thanks to her “strong support”.

“At the beginning of our marriage, I thought we would run the house as partners. But I found out that Jesse does a lot more work than he has to do,” said the judge during the ceremony at the White House where her appointment was made official.

According to Reimers’ account, “bosses” also play a prominent role in the lives of young singles, as they are part of the dating process, helping to discern whether the person is ready to start looking for a partner to marry. And then, when the partner is found, help determine whether the couple should marry or not.

“People of Praise weddings are community events, rather than family events,” said Reimers.

In his article, the former South Bend community member also states that the organization has developed a model that seeks to ensure members’ obedience to the hierarchy and that, in the case of Catholics, keeps them away from their church.

“I heard a coordinator tell my wife not to discuss her life in the confessional: just say your sins, get absolution and get out of there, he said. My boss told me that it was not advisable for community members to seek spiritual advice from priests. and I know that others have received similar advice, “he said.

It is important to note that the events narrated by Reimers took place in the 1980s and that he is a former member of the brigade with the People of Praise.

The BBC tried to speak directly to those in charge of this Christian community, but they indicated that they are currently not granting interviews.

A link without clear definitions

But to what extent is Barrett now linked to People of Praise?

The question is difficult to answer because recently this community has not clarified its relationship with Barrett and, according to the New York Times recently, some news stories in which the judge and her family were mentioned have disappeared from their website.

Barrett, for his part, does not appear to have spoken publicly about his ties to the community.

The New York Times claims to have obtained a list of group members in South Bend that lists the judge as one of 11 local leaders.

In addition, between 2015 and 2017 the judge served on the board of Trinity School, a private school created by the community that some of her children attend.

And how much weight, if any, will your past or present affiliation with People of Praise have on your court decisions?

To answer that question, we will have to wait for it to be ratified as a Supreme Court judge.

These were the details of the news Amy Coney Barrett: What is the People of Praise, the group... for this day. We hope that we have succeeded by giving you the full details and information. To follow all our news, you can subscribe to the alerts system or to one of our different systems to provide you with all that is new.