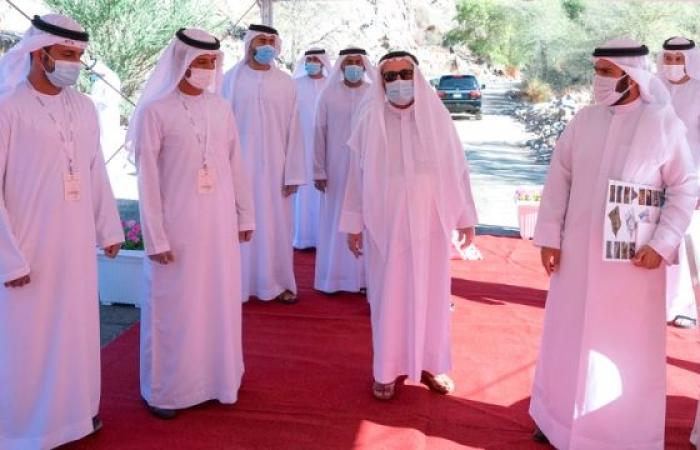 His Highness Sheikh Dr. Sultan bin Muhammad Al Qasimi, Member of the Supreme Council and Ruler of Sharjah, visited Khor Fakkan yesterday, inaugurated a number of tourist and urban facilities, and inspected a group of future projects. His Highness also inaugurated the initiative to plant the Khorfakkan Road mountains with trees commensurate with the nature of the region.

The visit comes within the framework of His Highness’s keenness to follow up the progress of development projects in the various cities and regions of the emirate, to check on the conditions of its people and inspect their needs, and to provide them with the best cultural, tourism, heritage and social facilities and services.

His Highness reviewed the plans of the Shees Rest House project, located on Khor Fakkan Road, which will be implemented in three phases in the northern and southern parts, and the rest will include 60 shops selling honey, fruits and vegetables, nurseries and carpets, in addition to food locomotives and more than 217 parking spaces.

His Highness went to open a Shees Garden and wandered around, and was briefed on the facilities and services it includes for the people and visitors of the area.

The park is one of the prominent projects that encourage ecotourism and is distinguished by its unique location between the embrace of tall mountains, and it provides visitors and tourists with a unique tourism experience to discover and enjoy the atmosphere of the mountainous regions.

His Highness the Ruler of Sharjah watched a documentary film about the stages of the park’s completion, which were implemented in eight months according to the best facilities and services.

The park is located on an area of ​​11,362 square meters, and receives its visitors with a 25-meter-high artificial waterfall that flows into the lake surrounded by stone paths and formations of stone sessions.

It also contains a mountain walkway from three mountain terraces connected by stone stairs leading to the main viewing platform at a height of 30 meters from the main garden level, and the platform provides an exceptional experience for viewing the natural sights of the region from great heights and in a safe manner.

The park includes paths of 506 meters surrounded by palm trees, a group of local plants, a play area and 32 shaded sessions for families, and an outdoor theater has been established for 70 people, and a barbecue area prepared and equipped with high standards of safety and environmental preservation.

After that, His Highness, the Ruler of Sharjah, went to the Najd Al-Maqsar village, which is one of the most important ancient human gathering centers in the Wadi “Washi” located within the scope of the historic city of Khorfakkan, and then he listened to an explanation of the project’s details, importance and historical significance, as many evidences and monuments were found. In the region, which confirms the presence of humans in this region for thousands of years, where there is water and arable soil.

His Highness explained that the reconstruction and restoration of this area comes in light of what he seeks to preserve the environment, revive the archaeological and historical areas, and equip it to be a distinguished tourist destination that attracts visitors from inside and outside the country, and to be a living witness to the history and nature of the life and livelihood of our great ancestors.

The village includes 13 old houses dating back nearly 100 years, and it was used by the people at that time as a shelter and a refuge from the flow of torrents. According to archaeological studies, rocks engraved with drawings of camels and horses were found in the Wadi “Washi” region, estimated to be 2000 years BC. .

There are also historical evidence of the displacement of a number of the people of the city of Khorfakkan to the Wadi “Washi” region, especially the settlement of Najd al-Maqsar, during the Middle Ages, at the time of the Portuguese colonization of the region, to seek shelter in its impenetrable mountains.

After being re-equipped with the latest facilities to receive visitors, the village will include 13 hotel units in the heritage style, a mosque, toilets, barbecue areas and outdoor sessions, in addition to the restoration of the upper fortress of the village, which was established about 300 years ago on the top of the mountain, and was part of the network The defensive city of Khorfakkan is old, and has been equipped to be a distinct tourist attraction in the region, as the fort provides a charming view of the valley, the village, the farms and the surrounding mountain heights.

His Highness the Ruler of Sharjah was briefed on the Najd Al Maqsar Oasis and Resting Project, and directed the implementation of self-harvesting farms, and the provision of all facilities and services to visitors and tourists who wish to learn about the historical legacy of this region.

His Highness also inspected a number of development projects that serve the region and its people, and contribute to stimulating the economic and tourism movement in the region.

His Highness the Ruler of Sharjah launched a qualitative environmental initiative, represented in planting a number of mountains located on the Sharjah-Khorfakkan road, with fig trees, sebs, mias and frankincense, which are commensurate with the nature of the region, and naming the mountains after the trees planted on them.

The initiative aims to preserve the environment and ensure its biodiversity, and to revive some areas and plant them with types of trees and plants that are compatible with their natural components.

His Highness’s environmental initiatives have contributed to the preservation of a large number of endangered plants and animals, and to resettle them in their original places.

These were the details of the news Ruler of Sharjah inaugurates Shees Park and Najd Al Maqsar village... for this day. We hope that we have succeeded by giving you the full details and information. To follow all our news, you can subscribe to the alerts system or to one of our different systems to provide you with all that is new.