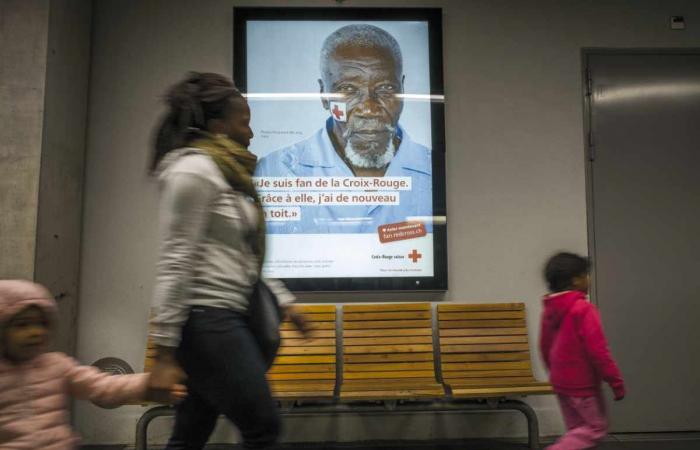 We cannot do without a neocolonial reading of this history: we mark this man as we marked slaves, to signify that he belongs to his benefactors. The slogan itself is unacceptable. It resembles the “thank you Bwana” of the first representations of charity to the colonies.

All this construction is advertising, it takes the aesthetic of the victim grateful to the white savior. We do not question the dependence of poor countries on rich countries, we just want to create an emotional link. It’s a spectacle. ”

Finally, when we learn from Valérie Gorin that Rosius Fleuranvil has been dead for four years, she almost suffocates: “It’s scandalous! Either way, there is a huge consent issue for me in this picture. What I see is the self-aggrandizement of Swiss generosity to the detriment of a man whose image rights do not interest us. Was Rosius Fleuranvil really in a position to refuse the slogan that was put in his mouth and the use that would be made of his image long after his death? ”

“It tortures me that he’s dead. I did not know. It’s painful. Yes, the issue of consent is critical. Even if we always try to make our interlocutors understand the issues, I have seen contracts of beneficiaries that we had photographed which were signed with three crosses. ” From her Zurich office, Ruth Wagner of the One Marketing agency seems genuinely upset by the news of Rosius’ death.

She has designed several campaigns for NGOs, including that of the CRS and also that of Amnesty with real victims wrapped in survival blankets. “There are immense ethical issues in humanitarian communication. By using images that “work” to raise funds, we risk feeding stereotypes. I no longer believe that the end justifies all the means. “

Ruth Wagner launched an initiative and associated site, Fairpicture. “Images have a decisive impact on the way we see the world. We must therefore change the images. ” One of the key ideas of his project is to establish a network of photographers who come from the fields of intervention, all over the world. “Stereotypes are also born from ignorance of the field. People must be able to represent themselves. ”

The magical promise of humanitarian aid

We can say that these questions are problems of the rich. And the real issue was that an organization built a roof over Rosius Fleuranvil when it needed it most. I believe that if the painted face of Rosius similarly appealed to me, it is because I know how the reconstruction of Haiti is a monumental failure. I have known this country since 2003 and have been going there at least once a year since that date; In the two or three years following the earthquake, the only question I was asked about the country was: “Have we finally rebuilt?”

The hyper-simplifying syntax of aid organizations, the almost magical promise that it is enough to solve a problem by donating the wealthy people and the idea that a $ 6,000 prefabricated house not only compensates for a national tragedy but also decades. bad governance and international interference, all this contributes to a strengthening of the balance of power and the impression that some countries are doomed to misery.

Today, no one asks me: “Is Haiti being rebuilt?” Because, to the magic promise, succeeded a world disappointment and a subtle guilt of the victims.

I find myself sitting at a class at the Graduate Institute in Geneva, a globalized factory of future humanitarians. Professor Julie Billaud teaches humanitarianism or a critical history of humanitarianism. When she asks her students, who come from all over, about the reasons for their participation in this course, a former MSF employee says: “I am lost. I am full of dogmas on my discipline, which I have to deconstruct. ”

“A lot of the students I train tell me that they are desperate,” explains Julie Billaud. Before teaching, she carried out missions in South Asia and Afghanistan (for an organization that no longer exists, International Medical Aid) and observed how humanitarian thought was inherited from a colonial desire for control: “I had the very deep feeling of being a con artist and this feeling was quite shared by many of my colleagues. The problem is that of good conscience which often prevents us from questioning our intentions and our effectiveness. To do this job, you may have to give up some of your illusions. ”

During those months when I was caught up in Rosius’ story, I received in my box the advertisement for an organization that had a hole in a cardboard box to show the normal size of a western girl’s arm circumference and that, tiny, of an African girl. I also met in a square a day employee of another humanitarian organization who, after showing me the 3D images of an African woman in a field, told me that other NGOs were not building wells but sent “plastic water bottles”.

After confinement, I also saw the new campaign of the Red Cross appear in the streets of French-speaking Switzerland. Volunteers pose with the organization’s flag painted on their faces. “Solidarity, all together: thank you for your support for the most vulnerable”, says the slogan which aims to raise awareness of those who were active during the peak of the epidemic. They stare at passers-by. Like Rosius.

These were the details of the news What Rosius Fleuranvil’s life says about humanitarian aid for this day. We hope that we have succeeded by giving you the full details and information. To follow all our news, you can subscribe to the alerts system or to one of our different systems to provide you with all that is new.