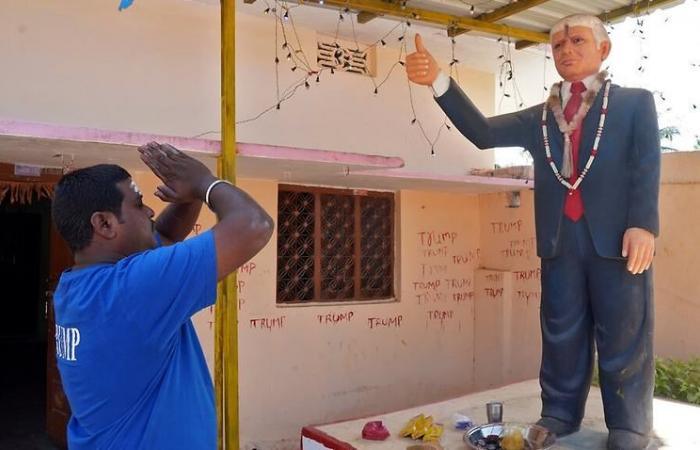 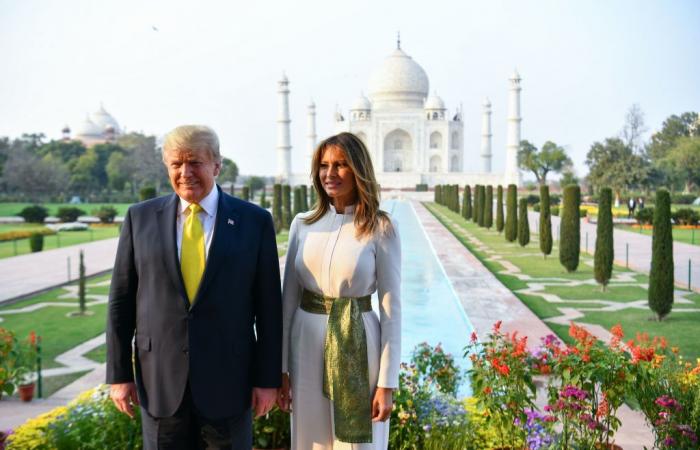 In India, where many admire President Donald Trump, a farmer worshiped him like a god and prayed every morning to a life-size statue of the US President in his backyard.

“At first everyone in the family thought he was mentally disturbed, but he held on to it and everyone finally came over,” said Vivek Bukka, a cousin of farmer Bussa Krishna.

When Mr Trump announced that he had the coronavirus, it devastated Mr Krishna. The farmer posted a tearful video on Facebook in which he said: “I am very sad that my God Trump has been infected with the corona virus. I ask everyone to pray for his speedy recovery. ”

He stopped eating to show solidarity with his idol’s suffering from COVID-19, his family said. He fell into a deep depression. He died of cardiac arrest on Sunday, the day Mr. Trump recovered.

Mr. Krishna’s devotion had made him a minor celebrity and he was the subject of some national headlines. His death made news all over India.

Mr Bukka said his cousin was physically fit and had no history of health problems or heart disease. There is no evidence linking Krishna’s death to his fasting.

There is no evidence that the White House or Mr Trump – who said he recovered from the virus and felt “powerful” after being treated with a cocktail of drugs – knew his biggest fan in India. Many of the country’s urban intellectuals don’t like the US president and he is regularly ridiculed on Indian social media platforms.

But the president has support in other corners of Indian society. A February study by the Pew Research Center found that 56 percent of those polled in India said Mr. Trump would “do the right thing when it comes to world affairs,” up from 16 percent in his election.

Mr. Trump’s popularity in some parts of India is notable because of the cult of personality he has sought to cultivate – an unapologetically bold figure leading the United States into a brilliant new future while advocating for America First – as India’s Prime Minister Narendra Modi reflects, projects onto his own supporters.

A Hindu priest seeks blessings from gods and to unite India and the United States of America against radical Islamic fanatics.

Mr Krishna, a widowed farmer in his thirties who lived in the village of Konne, southern Telangana state, had been a supporter of Mr Trump for about four years. He became a fan when the president appeared to him in a dream, his relatives said, predicting that India’s national cricket team would beat its arch-rival Pakistan in a match the next day.

India won, said Mr Bukka, “and from that day he began to worship Donald Trump”.

But the farmer also admired the president as a guide, said Bukka, a 25-year-old accountant who lives near the southern city of Hyderabad. His cousin didn’t speak English and the local news outlets he lived with paid little attention to US politics. So he relied on his cousin to translate articles and videos for him.

The neighbors didn’t know much about US politics and had no opinion on Mr Trump, he added. But since Mr. Krishna was such a big fan, they took his cause as courtesy, even if it struck them as a little strange.

As Mr Krishna’s devotion to Mr Trump increased, he started fasting every Friday to support him and commissioned the construction of a shrine in his back yard with the life-size statue, Mr Bukka said. He worshiped it every morning for an hour or two with Hindu rituals, just as one could pray to Krishna, Shiva, Ganesha or other gods in the Hindu pantheon.

33-year-old farmer Bussa Krishna sacrifices the statue of US President Donald Trump in his home in Hyderabad, India.

A video of Mr. Krishna that is widely available online shows him performing a prayer ritual or pooja in front of an altar that has a picture of Mr. Trump on it.

In another instance, he wears a t-shirt that reads “Trump” in white block letters while pouring water over the head of the statue, who is wearing a red tie and showing a thumbs up. The Trump statue has a garland of fresh flowers around its neck and a red tilak – a traditional cinnabar or sandalwood paste symbol used in religious ceremonies – on its forehead.

The creation of a statue of Mr Krishna in the shape of Mr Trump is not unique. An architect built a giant wooden statue of Mr. Trump with vampire teeth in Slovenia, the home country of First Lady Melania Trump. Some critics denounced it as a “waste of wood”.

The creator of this statue, Tomaz Schlegl, an architect, had a clear vision and message in mind. “I want to make people aware of the rise of populism and it would be difficult to find a bigger populist in this world than Donald Trump,” he told Reuters.

A life-size wooden sculpture of Mr Trump near the town of Sevnica in eastern Slovenia where she grew up was set on fire. The commissioning artist replaced it with a bronze statue.

Lord Krishna made a valiant attempt to meet his idol. He traveled to the U.S. embassy in New Delhi before Trump traveled to India in February to arrange a meeting, said Venkat, the village chief.

US President Donald Trump and First Lady Melania Trump pose while visiting the Taj Mahal in Agra in February 2020.

Mr. Trump later spoke in Ahmedabad, the heart of Modi’s home political base, outside a stadium with 100,000 cheering attendees.

Lord Krishna kept the faith until the end.

Upon learning of Mr Trump’s coronavirus diagnosis, he locked himself in his room, Mr Bukka said.

“We tried to force him to eat, but he hardly ate,” he said.

On Sunday, Mr. Krishna collapsed and his relatives took him to the hospital. He was pronounced dead on arrival.

Lord Krishna is survived by his parents and seven year old son.

Venkat said the villagers were discussing how best to maintain their neighbor’s Trump shrine.

These were the details of the news Bussa Krishna built a Donald Trump shrine in India and prayed... for this day. We hope that we have succeeded by giving you the full details and information. To follow all our news, you can subscribe to the alerts system or to one of our different systems to provide you with all that is new.