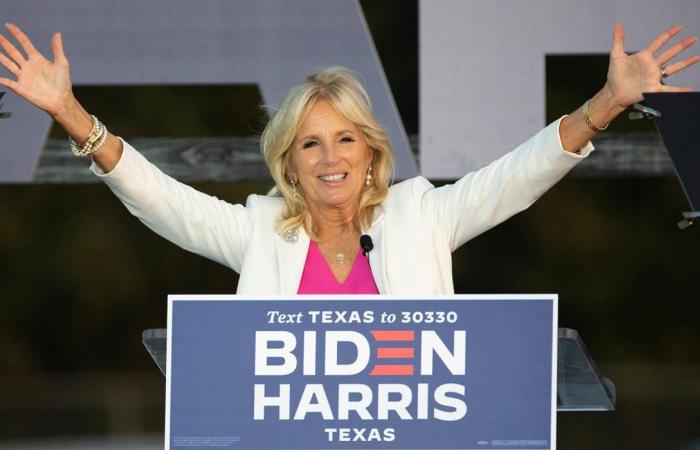 When she took the podium this week in El Paso, Texas, Dr. Jill Biden clearly. “For the first time in a long time, Texas can win,” she confidently told the crowd. “And if we win here, we can no longer be stopped.”

It was a far cry from the once reluctant political wife who previously described how the mere prospect of a speech made her “so nervous it made me feel sick”.

Since her husband Joe Biden received the Democratic President nomination, Dr. Biden quickly became one of the most productive representatives of his campaign. He hosts in-person events and virtual fundraisers at a rate that often outperforms her spouse.

With her youthful appearance – she is eight years younger than her husband – and her carefully crafted remarks, Dr. Biden’s strength in the counterbalance she offers to her husband’s occasional outbursts and verbal slips on the campaign path.

In recognition of her appeal, the Democrats have put the former second lady at the center of her husband’s election campaign.

Her appearance on a university campus in El Paso was just the first stop on a three-city tour of Texas for Dr. Biden on Tuesday as she wants to help Mr. Biden become the first Democrat since 1976 to color the state blue.

“We have to work like we’ve never done before,” she told the crowd of around 50 people in El Paso, calling on supporters to increase the turnout on the first day of the early vote in Texas.

“One vote could mean the difference between losing and winning a district,” she said. “A district could win a state. And one state – this great state – could determine our future for future generations. ”

Their comments reflect the optimism Democrats have about the Lone Star state by recently announcing a $ 6 million advertising campaign – a move that would have been unthinkable just a few months ago.

Poll averages suggest the race in Texas is unusually close and Donald Trump is only 4.4 points clear of Mr. Biden.

On Dr. Biden’s appearance in El Paso was followed by events in Dallas and Houston, where Democrats see their best hopes for an increase in turnout ahead of November 3rd election day.

Emma Acosta, of the El Paso County’s Democratic Party, said it was important that the candidate’s wife spend the day in Texas and that the elections be less than three weeks away.

“I think it’s invigorating,” she said. “We needed them here in Texas, we have to make sure people go out and vote.”

During the campaign, Dr. Biden, who has worked as a teacher for decades, advocated the topics that are close to her heart: education and support for military families. The 69-year-old has used her personal story many times to underscore her message, delivering her prime-time address during the Democratic Convention from an empty high school classroom where she taught and extensively about the couple’s late son, Beau spoke and his time in the US military. It was a subject she returned to during her events in Texas, where she praised her husband’s plans to “safely reopen our schools and childcare programs” and his promise to “protect and prepare our troops.”

It was a speech that resonated with the crowd. “You can understand their message. I don’t like big speeches and it was precise, ”said Norma Fincher. “She has just addressed the most important issues with great effect.”

Ms. Fincher also noted that while Mr. Biden’s age worried some voters, his wife gave him an important boost in the campaign. “I think she’s energizing him,” she said. “”

Others, like Noel Rosenbaum, said Dr. Biden’s background story won her support. “She is a remarkable woman in her own right,” she said, noting her PhD in upbringing and intent to continue teaching when she becomes first lady.

Was Dr. Biden the secret good of the Democrat? “I don’t think it’s a secret,” said Ms. Rosenbaum with a laugh. “She is an extraordinary woman.”

Dr. Biden focused her speech on anecdotes from voters she met on the way to election. Summing up her opinion on the voters, she said: “We care more about people than politics.”

These were the details of the news The Democratic Party targets Texas with a “secret weapon”: Joe Biden’s... for this day. We hope that we have succeeded by giving you the full details and information. To follow all our news, you can subscribe to the alerts system or to one of our different systems to provide you with all that is new.