Karabakh conflict … Azerbaijan talks about its progress in more than... 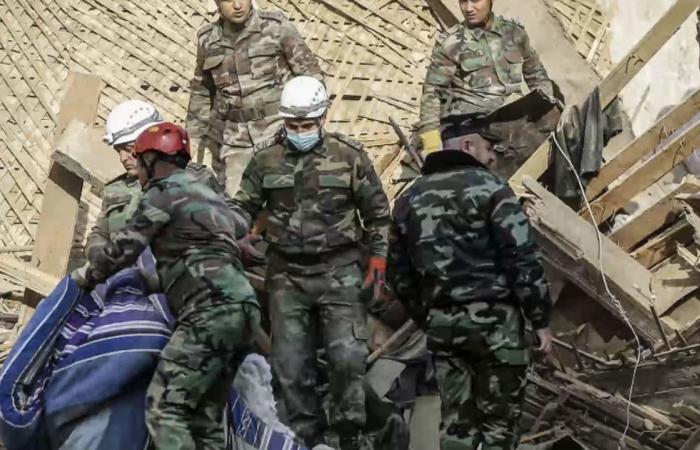 Azerbaijani President Ilham Aliyev said that his country’s army is advancing in more than one axis in the Nagorno Karabakh region, while the Armenian Prime Minister Nikol Pashinyan accused Azerbaijan of seeking to fully occupy the region.

The clashes between the Azerbaijani and Armenian forces entered its third week, without any signs of calm, despite the two sides’ agreement – following Russian mediation – on a ceasefire that entered into force last Saturday, but did not hold.

President Aliyev said in an interview with a Turkish channel that his country’s army is advancing in more than one axis in the region, and that it will liberate the lands of Azerbaijan, adding that what he described as Armenian terrorism will not break the will of the Azerbaijani people.

Aliyev said that the military operations in Nagorno Karabakh will continue until the region is fully restored, but he called on the Armenian population in Karabakh not to feel anxious.

The Azerbaijani president promised Armenia that it would pay a heavy price if it attacked the Azeri gas and oil pipelines.

The Azerbaijani Defense Ministry broadcast pictures that it said were from inside the city of Gabriel, near the border with Iran, which the Azerbaijani army had announced control of on the fourth of this month.

8 villages
On Wednesday, the Azerbaijani president said on Twitter that his country’s army had retaken 8 additional villages from the “Armenian occupation”, namely, Qara Dagli, Khatun Bulak, and Kara Kullu of Fuzuli state, in addition to Bolotan, Malik Janli, Kamer Türk, Tekke and Tagsir of Khojawand state.

Since the beginning of the fighting on the 27th of last month, Azerbaijan declared control of 43 villages and towns, in addition to one city, Gabriel.

Yesterday, the Azerbaijani Ministry of Defense announced the destruction of missile launchers in Armenia that were in a state of readiness to launch as a preventive measure to protect civilian areas, in a precedent that raises fears of an escalation of the conflict.

On the other hand, the Armenian Ministry of Defense said that, on Wednesday morning, Azerbaijan bombed Armenian military equipment on the northern border with the Nagorno Karabakh region, and an Armenian military target off the Kavachar region.

The ministry added that it reserves the right to target any military facility inside the Azerbaijani territory in response to the bombing of the missile launchers.

The Prime Minister of Armenia Nikol Pashinyan accused Azerbaijan of seeking to fully occupy the Nagorno Karabakh region, as he put it, describing the situation in the region as very difficult.

Pashinyan added that Turkey and Azerbaijan do not want to stop their attacks.

The president of the unrecognized Nagorno Karabakh region, Aryk Harutyunyan and the Armenian president, acknowledged on Wednesday that the region’s forces had retreated in the north and south of the front line.

Lavrov stressed that his country does not agree with Turkey’s position that there is likely to be a military solution to the conflict over the Nagorno Karabakh region, and that it has informed Baku and Yerevan of the need to hold meetings between the military, to set up mechanisms to verify the ceasefire in the region.

Turkish President Recep Tayyip Erdogan told his Russian counterpart, Vladimir Putin, in a phone call yesterday, Wednesday, that Ankara wants a permanent solution to the Karabakh issue, and the Kremlin said that the two leaders stressed the importance of the ceasefire reached with Russian mediation.

An international claim
The United Nations called on the two parties to the conflict to respect the ceasefire agreement between the two countries, warning that the continued fighting would lead to an outbreak of the Coronavirus in them.

The spokesman for the Secretary-General of the United Nations added in a press conference on Wednesday that the international organization calls on Azerbaijan and Armenia to respect the ceasefire agreement and to engage with the co-chairs of the Minsk group in meaningful discussions.

The Minsk Group – co-chaired by France, Russia and the United States – was established in 1992 with the aim of mediating between Baku and Yerevan in order to find a peaceful solution to the Karabakh region issue.

The Nagorno Karabakh region separated from Azerbaijan before the collapse of the Soviet Union, which resulted in a war that left 30 thousand people dead in the 1990s, and the United Nations recognizes the region as part of the lands of Azerbaijan.

Since the secession of the region, Azerbaijan has accused Armenia of occupying its lands, and the two parties have entered into many military confrontations, despite the effect of a ceasefire in 1994.

These were the details of the news Karabakh conflict … Azerbaijan talks about its progress in more than... for this day. We hope that we have succeeded by giving you the full details and information. To follow all our news, you can subscribe to the alerts system or to one of our different systems to provide you with all that is new.