EbeneNews – FR – Joe Biden or the tragic fate of... 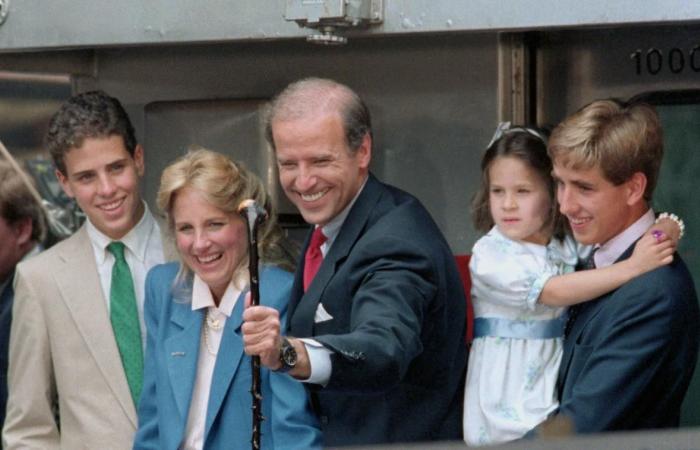 Joe Biden surrounded by his wife Jill, his sons Beau and Hunter and his daughter Ashley, in 1987

In the shadow of a forty-year political career, Joe Biden experienced what no one wishes on anyone: the tragic loss of his first wife and two of his children Portrait of a family that has not been spared

“What’s going to hit us, Joey?” Everything’s too good Neilia Biden, 30, must have said it with a smile, as the lucky ones say life has been a little too generous with them so far Six years earlier, she married Joe Biden, a lawyer promising with whom she had three children, Beau, Hunter and Naomi. Together, they succeeded in toppling the Republican Senator from Delaware so that Joe would run for office under the Democratic label. Together they are (no doubt) very happy “Everything is going too well”, therefore, she said to her husband that evening in December 1972, a few hours before the accident from which she will not return.

Joe Biden with his first wife Neilia and their two sons Beau and Hunter, November 21, 1972, a month with the tragic accident

On December 18, she is driving her three children for the traditional Christmas shopping when their car is hit by a semi-trailer at a crossroads Neilia and her 13-month-old daughter are killed instantly; Beau, 4, and Hunter, 2 and a half, seriously injured “My very first memory is in this hospital bed, lying next to my brother, Hunter will remember much later” I was almost 3 years old I remember my brother who was 1 year and 1 day older than me, holding my hand, looking me in the eye and saying “I love you, I love you, I love you” over and over again, Joe Biden no longer leaves the hospital where his sons were welcomed, spending night and day at their bedside, to the point of taking the oath of senator on the spot, offering a memorable photo to the American press (below). a lot of people have been through such hardships, ”he said in his 2015 Yale graduation speech,“ I have found redemption by focusing on my boys ”

Joe Biden is sworn in as a senator in his son Beau’s hospital room in Wilmington, days after the car crash in which his wife and daughter perished in 1972

After the accident, his sister Valerie moved into his home in Wilmington, NC. She helped him with the children, “convincing him to get up every morning,” she told The New Yorker in 2014. Each day, the young senator makes the round trip to Washington, but rarely linger in those social evenings where to toast to the cream of the policy “I wanted to be that man who hugs his children at night and hugs them again the morning ”, he continues in front of the students of Yale

In 1977, five years after Neilia’s death, Joe Biden married 26-year-old English teacher Jill Jacobs. The latter accepted after the fifth marriage proposal “The boys had just lost their mother and I didn’t want them to lose a second,” she told Vogue in 2016 So you had to be 100% sure about me “They welcome a little girl, Ashley, in 1981” She brought me back to life “, sums up Joe Biden in his memoir, Promises To Keep, published in 2007 The following years saw him take his statute of senator prominent, to the point of running for the Democratic primaries in 1986 – he eventually retired after accusations of plagiarism in one of his speeches.

Fed up with politics, Beau and Hunter Biden naturally follow in their father’s footsteps The first becomes Delaware attorney general, the second turns to lobbying America soon makes them the good son and the bad Beau, the irreproachable son , the one in which Joe puts all his hopes Hunter, the unstable offspring, addicted to drugs and alcohol, in rehab and relapse Joe Biden, omnipresent with his sons, does not do it In 2013, Beau reveals that ‘he fights with brain cancer Promised to a national destiny, the father of two died less than two years later on May 30, 2015, leaving his father and father devastated by grief Even today, Joe Biden rarely gives a speech without referring to his oldest son

This family is cursed, some blow, making an easy shortcut with the Kennedys Like them, a little scandalous too Two years after Beau’s death, Hunter Biden, separated from his wife following the funeral, announces in a crash that he has found love, in the person of his brother’s widow The Rest is soap opera At The New York Post, he said, “Hallie and I are incredibly lucky to have found love and mutual support during this difficult time, and it has been obvious to those who love us most ”Their relationship is validated by the parents of Jill Biden and Hallie, and the couple settle in with their five children – the three daughters from Hunter’s first marriage and the two children of Beau, named Natalie and Hunter, all for that, they split up a year later

However, the youngest son does not stop slowing the chances of his father in the presidential election of 2020 There are political errors, and personal setbacks Among these, this day in 2016 when we find him in a camp homeless man in Los Angeles with a gun to his temple as he buys crack cocaine Or the one where a young stripper claims to be the father of her child born in August 2018, DNA evidence to back it up Since the Democratic primary, Hunter Biden has reportedly decided to stay away from his father’s campaign – unless asked to do so.If the Democratic candidate is elected 46th President of the United States on November 3, then we bet new business will emerge , strategically unearthed by the opposition – if he doesn’t do it before the election But, once again, Joe Biden has seen worse Even today, he still does not work on December 18, in honor of his first wife and daughter

These were the details of the news EbeneNews – FR – Joe Biden or the tragic fate of... for this day. We hope that we have succeeded by giving you the full details and information. To follow all our news, you can subscribe to the alerts system or to one of our different systems to provide you with all that is new.