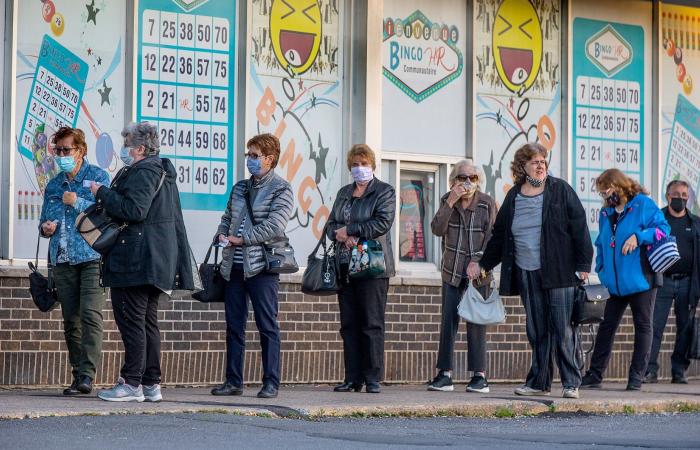 A Saint-Jean-sur-Richelieu bingo that brought together 250 people last Friday and made a lot of talk in the media closed its doors Wednesday evening until further notice, sending home the some 170 people who were there. gathered again.

HR Community Bingo received a visit from several police officers around 7:30 p.m. Wednesday evening, when the evening was just beginning. The participants – mostly elderly people – had been flocking there since late afternoon.

The decision to put an end to the event came from the bingo leaders themselves, in order to “give themselves better press,” said Sergeant Jérémie Levesque, of the Saint-Jean-sur- Richelieu.

The players have been asked to leave the premises. No statement of offense was distributed, indicates Agent Lévesque. He points out that the place has been the subject of regular “courtesy visits” by the police since July, who have each time observed compliance with sanitary rules, he said.

A few hours earlier, the general manager of the Bingo Secretariat, Éric Castonguay, refused to recommend that HR community Bingo and its other members close, especially since they collect money for community organizations. of the sector. Some have done it on their own, he says, others remain open. “It’s a double-edged sword: gambling is excluded from government aid programs, so most stretch the rubber band all the way. “

“The government has authorized us to be 250 people in the orange zone, so we will continue to do bingos until they forbid us to do so,” said Michel Lavigne, vice-president of HR community bingo. .

According to him, just like the Bingo Secretariat, bingo halls fall into the category of casinos and gambling dens, which can continue to operate in the orange zone. An opinion that does not share the Ministry of Health and Social Services (MSSS).

“The MSSS considers bingo to be a leisure activity which is often practiced in a hall and which cannot be assimilated to a hearing, a meeting or an audience,” the ministry argued by email. “The City of Saint-Jean-sur-Richelieu was [vendredi] in the orange zone, and therefore, the organizers should have limited themselves to 25 participants in the room. The region must switch to the red zone as of Friday.

At the time of writing, Éric Castonguay and Michel Lavigne had not responded to calls from Duty.

Last Friday’s busy night at HR Community Bingo hit the headlines on Wednesday. By 6:15 p.m., the room was full, while the evening did not begin until 7:15 p.m., said Michel Lavigne. It must be said that it was an exceptional evening, according to the organizers.

The evening took place in two parts: first, the local bingo evening. Then there is the “intermission”, explains the man on the phone. The highlight of the evening was the network bingo game, an event organized by Loto-Quebec which allows all bingo halls in Quebec to play at the same time. That night, the prize pool was over $ 100,000.

Loto-Québec announced on Saturday that network bingo was no longer available. He did not answer questions from Duty.

“We followed all the recommendations of the Public Health and we even added regulations, Michel Lavigne, HR community bingo, had defended himself earlier in the day on Wednesday. We had someone at the door asking for proof of residency and we refused everyone who came from outside of St. John who was in the red zone. A practice that was also underway on Wednesday, he found The duty.

There were hand washing stations, people were seated two meters away and wearing a mask was mandatory when traveling, Mr. Lavigne also assured. “Bingo people are often their only hobby, it’s the only place where they can have fun,” he said. And since the bingo halls closed in the red zone, people want to come to Saint-Jean. We had to refuse people. “

Denise Alexandre was one of some 170 people who attended on Wednesday evening. The 77-year-old lady, who comes once a week, didn’t want to miss the chance to play bingo one last time before the partial reconfinement. And maybe get your hands on one of the $ 1,000 jackpots.

Pandemic or not, she is keen on this activity that is well rooted in her routine. ” It’s’fun, she sums up. It allows you to talk, to see the world that it’s been a long time since we saw. “

The virus doesn’t scare him that much; she is not at all worried about catching it. “I feel solid. I’m not running after, ”she laughs, deeming herself safe with the measures put in place by the bingo organizers.

COVID-19 does not frighten Paul Ferrand, 56, either. “Me, I tell myself that it’s a flu like any other. You just have to be careful, that’s all, ”he says. His wife, Rosanne Martel, nods. The 62-year-old is a big fan of bingo, coming in on average four times a week. “I don’t drink, I don’t take drugs. It’s my only pleasure. “

With the imminent passage of her region in the red zone, she was already apprehensive about the closure of bingo. “I’m going to do my own thing at home… I’m going to knit or do some housework to take my mind off things,” she said.

Robert Roy was coming to join his sister, already seated inside, when we apostrophized him. “I hope I’ll win tonight,” he slips behind his mask, his eyes laughing. If he does not believe he is at risk of being infected by coming to bingo, COVID-19 scares him. “I’m careful all the time,” adding, “I know it’s going to take time, but I can’t wait for the pandemic to end. “

These were the details of the news Police put an end to a night of bingo in Saint-Jean-sur-Richelieu for this day. We hope that we have succeeded by giving you the full details and information. To follow all our news, you can subscribe to the alerts system or to one of our different systems to provide you with all that is new.