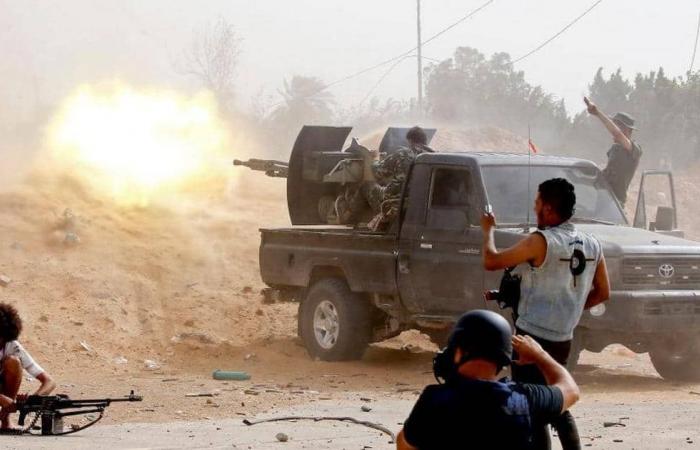 “Libya Al-Hadath” channel and Al-Marsad newspaper reported that Al-Baida was arrested in the capital Tripoli By the Ministry of Interior’s “deterrence” agency for combating terrorism and organized crime.

However, “Radaa” is nothing more than a militia outlaw, the majority of its members were militants participating in the chaos that has plunged Libya for many years.

Amnesty International said in 2018 that the Sarraj government had integrated this militia into the unified security forces and included them on the payroll.

The organization warned at the time that the matter would be an incentive for this militia to commit more violations.

According to news reports, the arrest of al-Baida came on the orders of the Libyan Attorney General.

And oversees the Bija armed force calling itself the coast guard militia, in an attempt to gain legitimacy.

Walpidja (Born in 1990) An international wanted man is seen as one of the people smugglers in western Libya, despite the fact that his mission entrusted to him by the Sarraj government is to secure the Libyan coasts.

The Security Council resolution in June 2018 imposed sanctions on Baida, for his involvement in the human trafficking across the Libyan border from Africa to Europe.

An arrest came Al-Baida, despite declaring his loyalty to Sarraj, and supporting him during the protests that took place in Tripoli weeks ago.

“Al-Marsad” newspaper said that armed groups deployed in the city of Zawiya, west of the Libyan capital, as soon as the news was reported, and worked to close the “27 Bridge” bridge leading to Tripoli.

Disagreements among the leaders of the Sarraj government are ravaging against the backdrop of the struggle for influence and money.

The conflict was clear between the prime minister and his powerful interior minister, Fathi Bashagha, while another conflict was raging between the governor of the Central Bank, Seddik al-Kabir, and Finance Minister Faraj Boumtari.

A few days ago, the security services of the Sarraj government, which are in fact closer to the militias, launched a campaign of arrests against what they described as those involved in corruption, but many have come to view it as a process of settling scores.

These were the details of the news Internal conflict in Tripoli … Militia arrests “militia leader” for this day. We hope that we have succeeded by giving you the full details and information. To follow all our news, you can subscribe to the alerts system or to one of our different systems to provide you with all that is new.

PREV One dead, a dozen injured in Austria train accident
NEXT 25 persons emerge from shell-pounded steel complex in Mariupol