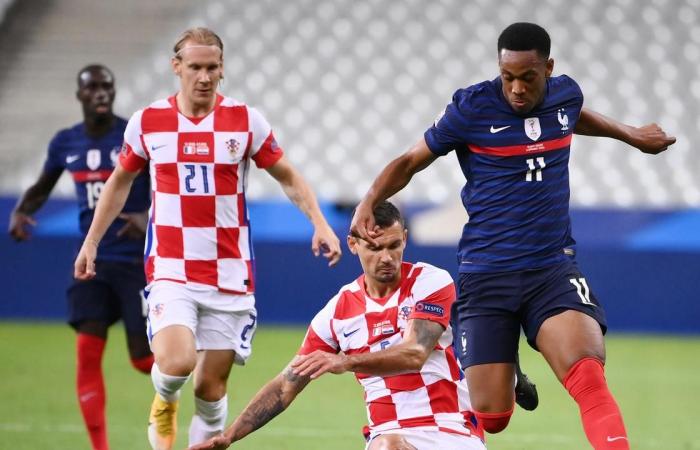 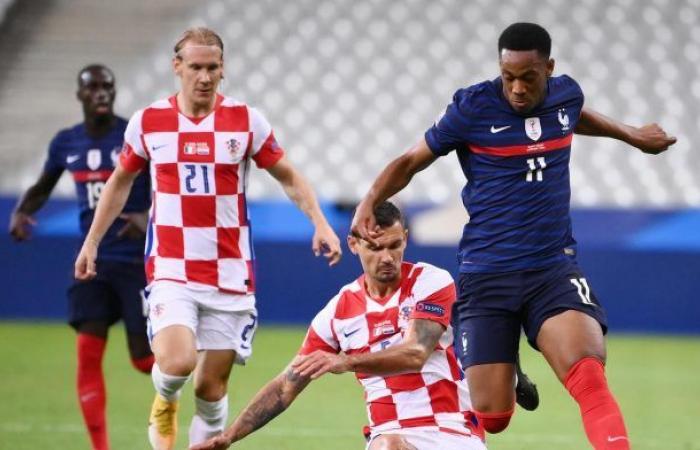 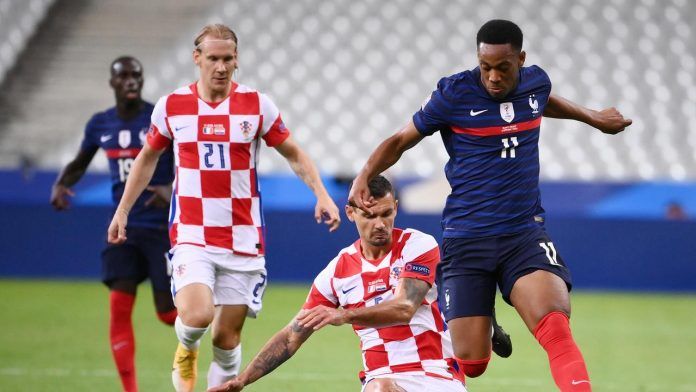 LIVE – Three days after their draw against Portugal (0-0), France travels to Zagreb to face Croatia in the League of Nations. The Blues, co-leaders of their group, are aiming for a third success in a row against the checkered selection. This time, if possible, with the manner.

Pogba is getting ready on the tricolor bench. He will come into play.

The more time passes, the less things go for the Blues. The losses of balls multiply.

Galvanized after this equalization, the Croats continue to fall on the goal of Lloris. Brekalo, the decisive passer, sends his shot into the stands of the Maksimir stadium.

The Blues pay dearly for their wait-and-see attitude since the return of the locker room. The series of matches without a goal conceded will therefore end at 4 for Didier Deschamps’ men.

Nikola Vlasic confirms in the selection his good start to the season with CSKA Moscow.

⚽ BUUUUUUUUUT DE VLASIC! Modric finds Brekalo, who entered a few minutes ago. The Croatian extends for Vlasic on entering the area. Free of any marking, he deceives Lloris with a sudden shot from outside the right. Croatia equalizes: 1-1!

Things are also moving on the bench of the France team …

???? YELLOW CARD FOR UREMOVIC! The right side is sanctioned after air contact with Digne. The referee ruled that he had not refrained from playing the duel.

The debates are more balanced at the start of the second half. The ball moves from one camp to another. But, for now, opportunities are scarce on both sides.

Mendy does not climb on Vlasic, served to the left of the box. The Croatian triggers a cross shot from the left … but it is not on target to worry Lloris.

Deschamps sends players to warm up. Camavinga and Ben Yedder are among them.

First Perisic breakthrough on the left side. The Croatian clears Mendy before delivering a fleeing cross in front of Lloris’ goal. No one is there to make this action a reality.

⏰ IT’S GOING BACK TO MAKSIMIR STADIUM !!! The Croats engage for this second act. It moved during the rest with two changes.

⏰ IT’S BREAK AT MAKSIMIR STADIUM !!! The Blues lead 1-0 against Croatia thanks to a firecracker from Antoine Griezmann in the 8th minute. Didier Deschamps’ players got into their match perfectly before easing off allowing the Croats to create a big opportunity, brilliantly released by Hugo Lloris.

In the fall of a cross from Griezmann, Lenglet tries to come and place his head. He is prevented by Vida. The ball ends up next to Livakovic’s right post.

???? Martial remains on the ground for a long time, after a sole from Vlasic. The Manchester striker leaves for treatment on the edge of the pitch, accompanied by trainers.

???? The Blues remain on 4 games without a goal conceded away, a series already seen between March and October 2007. The pass of 5 tonight for the Deschamps team?

Croatia woke up after a sluggish start. Luka Modric’s teammates are now playing the game. The French will have to let the storm pass.

???? Was there a fault on Anthony Martial and a penalty for the Blues?

Contact between Tolisso and Vlasic in the area of ​​the Blues. The penalty came close.

Lloris’s point blank parade! After a mess in the tricolor area, Pasalic sets off a powerful half-volley that the Blues goalkeeper deflects with one leg.

New intervention of Lenglet of the head. The Barça defender, who lets nothing go, has been ultra-domineering in the air sector since the start of the meeting.

???? Croatia is one of Antoine Griezmann’s favorite victims.

Good free kick for the Croats after contact between Lenglet and Petkovic. Perisic takes charge of hitting him … directly above the cage guarded by Lloris.

The Blues have voluntarily left the ball to Croatia for a few minutes. Zlatko Dalic’s men fail to use it wisely.

It is Martial’s turn to shine. Alerted in depth, the Blues striker collapsed in contact with Vida. He claims a penalty which is not awarded to him despite the Croatian fault.

???? In video, Antoine Griezmann’s opening of the scoring in strength.

Found on the left side, Mbappé searches for Martial with a small ladle in the area. The MU striker immediately set back for the Parisian, who does not sufficiently adjust his flat right foot in front of the goal, however open, of Livakovic.

Put in difficulty by Martial, who presses him high, Lovren releases without taking any risk.

Very good start to meet the world champions. The Croats are totally cornered in their camp. They can not line up two passes, in a hurry by the Blues.

???? So it took less than ten minutes to witness the awakening of “Grizou”.

⚽ BUUUUUUUUUT DE GRIEZMANN !!! On the right side, Mendy overflows before centering towards the near post. Vida returns in the axis on Griezmann. After controlling, the Blues striker scores with a powerful strike with the help of the bar. 1-0 for France!

Already a second corner for the Blues in this match. Didier Deschamps’ men insist on Livakovic’s goal. Petkovic clears the ball in front of Varane.

???? YELLOW CARD FOR VLASIC! It is the turn of a Croatian to be warned at the start of the match after a dangerous sole on Mendy. A yellow card on each side.

???? YELLOW CARD FOR DIGNY! The tricolor side comes to stop the Croatian counterattack. He is logically sanctioned for his late tackle on Uremovic.

Attentive in his surface, Lenglet rejects the first Croatian foray with his head.

⏰ IT’S GONE AT MAKSIMIR STADIUM !!! The Blues engage in this period. First ball for Mbappé, who escapes on the left side. Its center is countered.

The two teams enter the lawn of the Maksimir Stadium in front of 7,000 Croatian supporters. Covid obliges, there will be no handshakes between the players or the staffs.

Never two without three ? On September 8, two years after the world coronation, the Blues had found Croatia at the Stade de France. They had inflicted the same correction (4-2) on them as in the 2018 World Cup final. Abused in the first period, although ahead at the break (2-1), Didier Deschamps’ men had ended up s ‘impose thanks to a relentless offensive realism. This Wednesday (at 8:45 p.m., live on TF1 and live commented on LCI), the world champions travel to Zagreb to bounce back, after playing with the brake during the sad draw against Portugal (0-0) on Sunday.

Co-leader of Group 3 with Portugal, which for its part receives Sweden without Cristiano Ronaldo, tested positive for Covid-19, the French team is looking for energy and inspiration. Like Antoine Griezmann, appeared extinct during his last outings with the tricolor jersey. “Like any player, there are ups and downs. He is in a slightly more complicated offensive period. But I see a player ready to defend, to make efforts for his teammates, on that we can not question him“, commented the captain of the Blues Hugo Lloris, who called on his partners to”help him“.

Little flourished since his arrival in Barcelona in the summer of 2019, “Grizou” can count on the unwavering support of his teammates and his coach. “In 81 selections (82 after Portugal, editor’s note), it’s 32 goals, 21 assists, that speaks volumes. It will not guarantee him anything but I know his quality and what he is able to give to the team“, recalled” DD “, in solidarity with his player. The former captain of the Blues, who won in the same Maksimir stadium twenty years ago (2-0 friendly victory, May 28, 2000), knows that in order to bring something back from Zagreb, he will have to rekindle the flame of his playing master.

And that will not be too much for the world champions, awaited with firm footing by 7000 Croatian supporters, the maximum level set in these times of pandemic, in the Maksimir stadium. “QIf there are lots of people, that’s pretty good for the players. If they are Croats, obviously it’s better for Croatia, but we’ll see that on the bright side.“, recognized Deschamps.”Sure there will be a bit of hostility“, added goalkeeper Hugo Lloris.”But it will do good for the French players to surpass themselves through adversity to win this match.“To find the path to victory, they will have to do violence to themselves.

*The article has been translated based on the content of Source link by https://www.lci.fr/football/en-direct-match-croatie-france-0-1-a-la-pause-les-bleus-menent-grace-a-griezmann-en-ligue-des-nations-2167287.html
. If there is any problem regarding the content, copyright, please leave a report below the article. We will try to process as quickly as possible to protect the rights of the author. Thank you very much!

These were the details of the news LIVE – Croatia-France (1-1): Vlasic puts the Croats back up to... for this day. We hope that we have succeeded by giving you the full details and information. To follow all our news, you can subscribe to the alerts system or to one of our different systems to provide you with all that is new.