Beirut and its old markets and other things 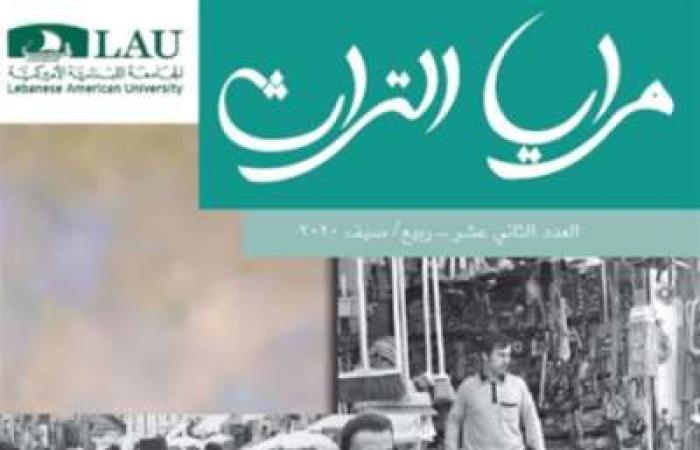 The “Lebanese Heritage Center” at the “Lebanese American University-LAU” published the twelfth issue (Spring – Summer 2020) of its semi-annual magazine “Mirrors of Heritage”, which included research and studies on cultural, educational, literary and immigrant heritage. Under the title “From the fog to the will to rise: so that we deserve Lebanon,” wrote the editor-in-chief and director of the center, the poet Henry Zogheib: “It is the destiny of Lebanon, which has been unique since the dawn of history with nothing like it and no one else resembling it (…) is its destiny to resist, and our destiny In it, we, his children, are to resist with word, thought, science, civilization, and especially with the great legacy that we have attained from our founding fathers, and it is our duty to preserve it. What is important is not preserving the inheritance as it was communicated to us, but preserving it by publishing and circulating it in the heart and molds, whatever its forms and features.

The “cultural heritage” chapter included two papers, the first of which was on “Beirut’s guarded life in the Ottoman era – the endowments of Muslims and Christians, elements of the advancement of Lebanese society” by researcher Hassan Hallaq who believed that “the spread of Christianity and Islam in Beirut was accompanied by the spread of the culture of benevolence and permanent giving in what was known as“ endowment ” . These endowments had an important role in the development of the Christian and Islamic societies, and even the advancement of Lebanon. The other research was titled “Lebanon in ancient guide books, a pearl of tourism and summer holidays at the heart of the Mediterranean” by university researcher Wissam Lahham. The latter toured tourist promotional publications since the Ottoman era, through the early twentieth century, the Mandate period, and up to the independence stage, when tourism promotion evolved from printed publications to the film sector. And the lighting today on these publications indicates that, “in our Lebanese heritage, a wealth of our social history because it contains facts that reconfigure the reality of the social life of the various groups of the Lebanese people in those successive periods.”
As for the section on “Educational and Social Heritage,” it also included two papers: The first of them is “Bashmezin, a pioneering educational oasis in Lebanon – an educational heritage that is 170 years old (1850-2020).” In which researcher Michel Juha read Shafiq Juha’s book “History of Education and Schools in Peshmizin 1850-1951 »Since the middle of the nineteenth century, when education began in the town of Bashmezin, individually, when a teacher or teacher taught the principles of reading and arithmetic to a limited number of students. With the spread of missionary schools, the American missionaries responded to the request of the people of Pashmazin and opened in the house of Gerges Sarkis a Protestant school for males (autumn 1879) that was the first modern formal school and the beginning of formal education in the town.
The other research in this section is “The old markets are Beirut’s memory as they rise to life” by the researcher Abd al-Latif al-Fakhoury, who returned to these markets since the last quarter of the nineteenth century, when they began to transform from alleys to the streets with their names and goods, and began to appear by their names: Al-Sayed Market, Ayas Market, Al-Jamil Market, Glass Market (Bayhm and Itani), Long Market (watches, jewelry, and “Flower of Camels” tablets), Seor Market (watches attached to the bra jacket), Al-Sagha Market (Raad and Hani), Attarin Market Sursock and Tueni Market (or the Nozha Market ….).
In the foreign section of the issue, two papers were published: The first is French, written by Lilian Pucciante Barakat on “The Dream Home in Khalil Gibran’s Paintings and Drawings.” Another research by an Englishman by Linda Jacobs (an American with Lebanese roots) on “the period that preceded the emergence of the Pen League and paved the way for the arrival of its members to its founding,” starting with Naguib Arbili’s “Planet America” newspaper (1892). Until 1920, the year the second form of the “pen bond” was born, in 1920, after its first formulation, in 1916.

As for the file of this issue, the content of the last two episodes of research on “The State of Greater Lebanon” “Mirrors of Heritage” was the first to launch its centenary activities in Lebanon in its special issue on the first of September 2019. The first research is “Borders of the State of Greater Lebanon: Backgrounds And differences »by historian Masoud Daher, in which he studied the birth of the demand for a return to Lebanon’s natural / historical borders, the reasons for the Lebanese forces’ claim to Lebanon’s historical borders, the Lebanese-Zionist conflict between the French and British mandates, then demarcating the borders of Lebanon according to the expansion of France’s influence in the Levant, and what was the anger The Zionist movement over demarcating the borders of Greater Lebanon, and the case of Lebanon throughout 100 years of continuous controversy over the demarcation of the borders. The other discussion is the role of the “Lebanese Union” party in declaring the “State of Greater Lebanon”, and what happened between September of Qasr al-Pine in 1920 and September of Diman in 1921, by Dr. Burgess Faris Gemayel.

These were the details of the news Beirut and its old markets and other things for this day. We hope that we have succeeded by giving you the full details and information. To follow all our news, you can subscribe to the alerts system or to one of our different systems to provide you with all that is new.