A crisis between Messi and the captain of Bolivia after the... 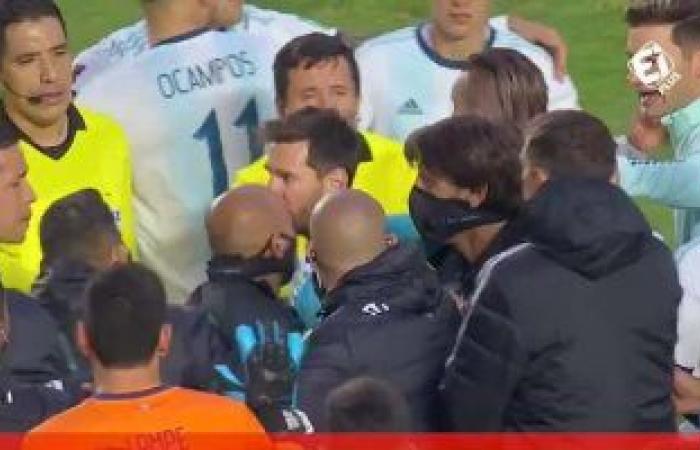 Argentine star Lionel Messi, the Barcelona player, entered into a heated argument with Marcelo Martins Moreno, captain of the Bolivian national team, after the end of the match that ended a short while ago, with the victory of the Tango dancers team, 2-1, and brought them together at the “Hernando Siles” stadium, within The second round of the South American qualifiers for the 2022 World Cup.

A strong dispute erupted between Messi and the captain of the Bolivian national team, with the final whistle, and the players of the two teams intervened to end the crisis that occurred on the pitch, and the referee of the match announced the yellow card in the face of the two players.

And resolving a positive tie, 1-1, in the first half of the match, the Bolivian national team advanced, with a goal scored by Marcelo Martins Moreno, in the 24th minute, from a header, which fell to the right of the Argentine goalkeeper.

But Lautaro Martinez, the star of the Italian team Inter Milan, scored the equalizer for the Tango team, in the last minute of the first half, after hitting the foot of a Bolivian defender, to turn into the net.

In the second half, Joaquin Correa, Lazio striker Italian, scored the winning goal for Argentina, in the 79th minute of the match.

The Tango team succeeded in achieving its first victory over Bolivia, at its stadium since 2005, with a score of 2-1 as well, and Lionel Messi won his first victory in the Bolivian stronghold, during his career with the Argentina national team.

Argentina topped the South American qualifiers table for the 2022 World Cup, with 6 points, while Bolivia remained without points.

These were the details of the news A crisis between Messi and the captain of Bolivia after the... for this day. We hope that we have succeeded by giving you the full details and information. To follow all our news, you can subscribe to the alerts system or to one of our different systems to provide you with all that is new.