With the arrival of the seasonal flu, rush on vaccines and... 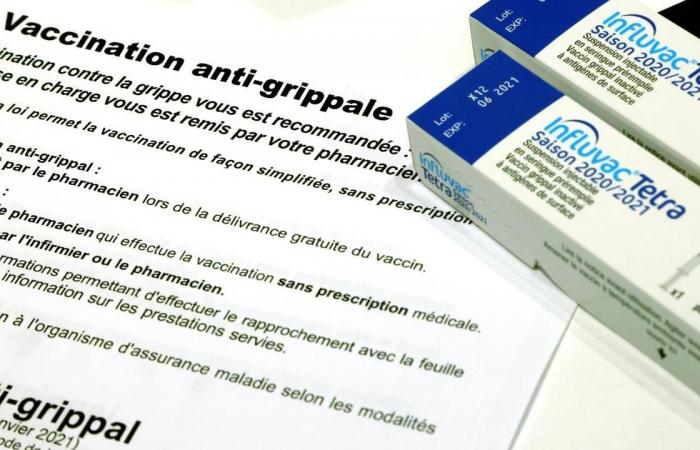 The flu vaccination campaign kicked off on Tuesday against the backdrop of the announced second wave of Covid-19. Faced with increased demand, some fear a shortage of vaccine doses.

Even more than in past years, the arrival of seasonal flu is taken very seriously. As a second wave of Covid-19 approaches in France, the flu vaccine campaign launched on Tuesday, October 13 is in the center of the attention of health authorities. As such, the Ministry of Health, Health Insurance and Public Health France are planning a “large-scale communication device” to encourage all at-risk people to be vaccinated.

The stakes are high because the symptoms of infection with the new coronavirus – which has already caused the death of more than a million people around the world – are similar to those of the flu. There is therefore a risk this winter of a “co-circulation” of the influenza virus and the coronavirus, have warned the health authorities, who wish to avoid an influx of patients with a severe form of influenza, the health system being already close saturation.

Four in ten French people want to be vaccinated

The authorities’ speech seems to have already marked the spirits. “This morning, we have not stopped”, tells France 24 Pierre-Olivier Variot, pharmacist in Plombières-lès-Dijon (Côte-d’Or) and vice-president of the Union of trade unions of dispensary pharmacists . “There is a long line in front of the pharmacy to get or reserve his flu shot. We sold 7 to 8 times more vaccines this morning than a year ago on the first day of the campaign. J performed 40 vaccinations in the morning compared to 5 last year. “

In fact, in 2019, only 26% of French people had decided to be vaccinated. Some 52% of those over 65 had used the vaccine and only 30% of those at risk under 65. “During the 2019-2020 season, (…) three quarters of people admitted to intensive care for severe influenza were eligible for vaccination because they presented one of the risk factors (…). However, among these, less than a third had been vaccinated, “said the Ministry of Health in a statement.

This year, four in ten French people intend to use the vaccine. For their part, the health authorities wish to “approach 75% coverage”, an objective corresponding to that defined by the World Health Organization (WHO).

The specter of a shortage

Under these circumstances, a shortage is looming. This is why the ministry, which anticipates “an increased demand for vaccines this year”, urges “people not presenting any particular risk, who would like to be vaccinated, to postpone their vaccination until the beginning of December”.

“The pharmacies that are delivered in one go are not likely to run out of vaccine doses, believes Pierre-Olivier Variot. On the other hand, those that have chosen to be delivered in three times are likely to be short. Either way, I refuse to refuse any request for vaccination. I have been fighting for too many years to get people vaccinated, I can’t see myself saying no to them. “

In anticipation of increased demand, the Ministry of Health ordered “30% more vaccine doses”, compared to the 12 million doses consumed in the previous 2019-2020 campaign, using a continuous supply from pharmaceutical companies, can we read in the government press release. Global flu vaccine manufacturers have upstream produced a record number of doses for the 2020-2021 season.

According to Pierre-Olivier Variot, “It is not certain that there are any supply problems. For my part, I have ordered 30% more stocks. For the moment, the vast majority of people have come to buy a vaccine had a Social Security vaccination voucher. Only about 15 people without a voucher showed up. “

The majority of the people targeted by the campaign indeed receive a voucher for the coverage of the vaccine by the Health Insurance, while the others can be delivered “by their doctor, midwife and, for adults, by their nurse or pharmacist “. This year, nearly 16 million people have received or will receive a voucher for the vaccine. Among them, 316,060 liberal health professionals.

Priority is also given to those over 65, people suffering from chronic pathologies (respiratory failure, heart failure, diabetes, renal failure, asthma, obstructive pulmonary disease, etc.) and those in morbid obesity (with a body mass index greater than 40 ). Pregnant women and those close to infants under 6 months of age at risk of severe influenza and people who are immunosuppressed are also among those strongly encouraged to be vaccinated.

“If all the people who have received a voucher are vaccinated, there will not be enough vaccines, it’s mathematical, notes Liliane Grandgeot-Keros, virologist and perpetual secretary of the National Academy of Pharmacy, in an interview to France 24. There is a real risk of supply disruption that cannot be ruled out. “

Each winter, depending on the year, between 2 and 6 million people are infected with the flu in France, according to the Haute Autorité de Santé (HAS). Over the past three years, the virus has killed between 10,000 and 15,000 people per year. “I only hope that this year, people at risk and health personnel will realize the value of being vaccinated every year”, concludes the virologist.

These were the details of the news With the arrival of the seasonal flu, rush on vaccines and... for this day. We hope that we have succeeded by giving you the full details and information. To follow all our news, you can subscribe to the alerts system or to one of our different systems to provide you with all that is new.