Sunspots can reveal more about life on exoplanets, say scientists –... 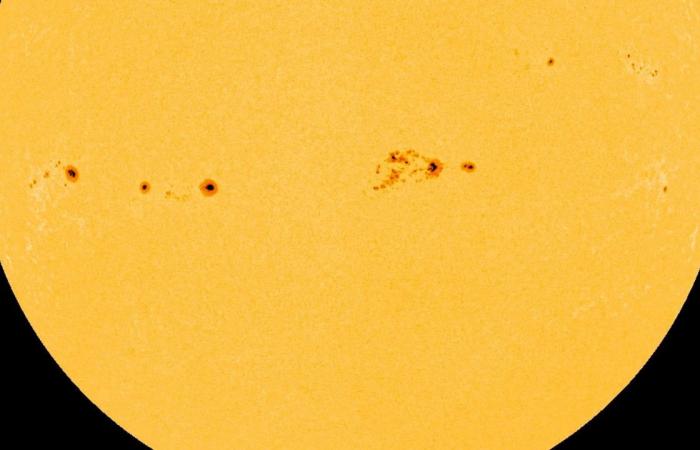 A new study now says that sunspots, which are darker, cooler spots on the sun, can reveal more about living conditions on exoplanets.

In the new study, researchers examined sunspots at a low resolution, resulting in a simulated view of distant stars. This could help understand stellar activity and living conditions on planets orbiting other stars.

Shin Toriumi, lead author of the study and scientist at the Institute of Space and Astronautics at JAXA, said they wanted to know what a sunspot region would look like if they couldn’t resolve it in an image. “So we used the solar data as if it came from a distant star to better link solar physics and stellar physics,” he said in a statement from NASA.

Scientists created diagrams of how light changed as the sunspot moved across the sun’s rotating face. Photo credit: NASA

Sunspots are often precursors to solar flares, according to NASA, and monitoring them could be important in understanding why and how flares occur.

Understanding the frequency of flares on other stars is one of the keys to understanding their chance of harboring life. Researchers believe that a few torches can help them build complex molecules like RNA and DNA from simpler building blocks.

The scientists used high-resolution data from the sun from NASA’s Solar Dynamics Observatory and JAXA / NASA’s Hinode mission. By adding up all of the light in each image, the scientists converted it into individual data points. By linking these data points, the scientists created graphs of how the light changed as the sunspot moved across the sun’s rotating face. These diagrams, which scientists call light curves, showed what a passing sunspot would look like on the sun if it were many light years away.

Study co-author Vladimir Airapetian stated that they were able to use solar observation satellites to resolve signatures on the 100 mile wide surface.

The new study was published in the Astrophysikalisches Journal and found that the light curves differed when they measured different wavelengths. The researchers also observed light curves in X-ray and ultraviolet light that show the atmosphere over the sunspots.

According to the study’s authors, particularly by studying stellar activity on young stars, scientists can help to get an idea of ​​what our young sun might have been like. This will help them understand how a young sun affected Venus, Earth, and Mars in its early days.

These were the details of the news Sunspots can reveal more about life on exoplanets, say scientists –... for this day. We hope that we have succeeded by giving you the full details and information. To follow all our news, you can subscribe to the alerts system or to one of our different systems to provide you with all that is new.