Despite the truce … Azerbaijan repels Armenian attacks and destroys 3... 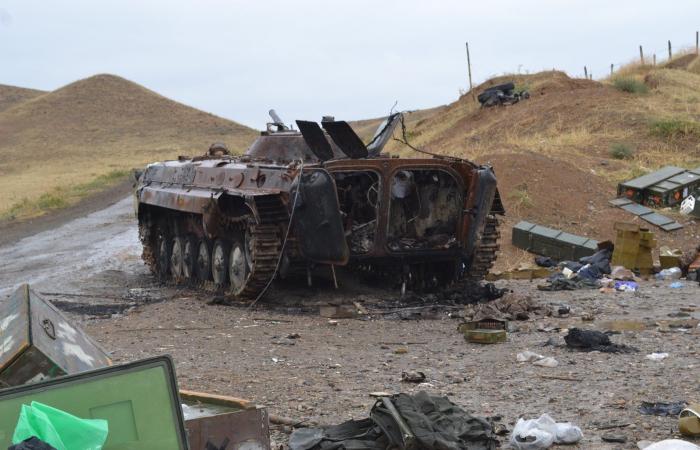 Despite the ceasefire, the Azerbaijani army repulsed attacks by Armenian forces throughout Monday night, which prompted them to respond.

On Monday morning, the Azerbaijani Defense Ministry stated that the Armenian forces launched attacks on sites in the direction of Agdera, Agdam, Fazuli and Gabriel.

She explained that the Azerbaijani army repelled the attacks, destroyed 3 drones, a T-72 tank and 3 Grad missiles of the Armenian forces, and neutralized many soldiers.

She pointed out that the artillery units of the 9th regiment of the Armenian army withdrew from the direction of Hdrut, noting that members of the fifth battalion of the regiment left their armored vehicles and fled.

It was reported that Azerbaijani artillery fire destroyed an underground shelter at the permanent stationing point of the 1st Regiment of the Armenian Army.

She indicated that the Azerbaijani army has control along the front line.

In another statement published by the ministry, it stated that the Armenian army fired on residential areas in the cities of Tatar, Goranboy and Agdam.

Iran expresses its concern about the violation of the armistice

On Monday, Iran expressed its concern about the violation of the ceasefire between Azerbaijan and Armenia in the Karabakh region.

This came according to a statement issued by Iranian Foreign Ministry spokesman Saeed Khatibzadeh.

Khatibzadeh explained that his country calls on both sides to abide by the ceasefire and resume talks within the framework of international law, respect for both countries, the territorial integrity of the other, and evacuation from occupied cities.

He added that Tehran calls on all parties to show more restraint, strongly condemns the missile attacks on infrastructure and residential areas and the killing of civilians, and expresses sincere condolences to the families of the victims.

He affirmed his country’s readiness to contribute to facilitating the resumption of talks within the framework of international law in order to reach a lasting solution and establish security and peace in the region.

On September 27, Azerbaijan launched an operation in Karabakh, in response to an Armenian attack on civilian populated areas.

As part of the operation, the Azerbaijani army managed to liberate the city of Gabriel, the town of Hadrut, and more than 30 villages from the Armenian occupation.

On Friday, a humanitarian truce was reached after a lengthy trilateral meeting held in Moscow between the foreign ministers of Azerbaijan, Armenia and Russia.

However, Armenia violated the armistice after less than 24 hours, by bombing the Azerbaijani city of Kanja with missiles, killing 9 civilians and wounding 34 others.

These were the details of the news Despite the truce … Azerbaijan repels Armenian attacks and destroys 3... for this day. We hope that we have succeeded by giving you the full details and information. To follow all our news, you can subscribe to the alerts system or to one of our different systems to provide you with all that is new.