“A Sudanese Mufti” permits normalization with Israel … and Tel Aviv... 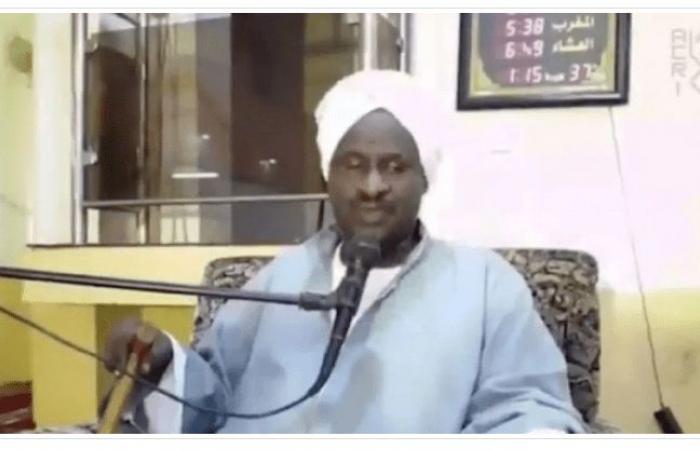 A video clip published by the Israeli account in Arabic on Twitter of the head of the Fatwa Department at the Sudan Scholars Association, Abdel-Rahman Hassan Hamed, in which he authorized the “fatwa of normalization with Israel”, angered the tweeters on Twitter.

And some Twitter pioneers expressed their rejection of the fatwa, which comes at a time when Sudan is witnessing rapprochement with Israel, and some components of the transitional authority are seeking to normalize with it.

And Sheikh Abd al-Rahman Hassan Hamid authorized normalization with Israel, based on what he said were “legitimate evidence.”

The “Israel in Arabic” page, affiliated to the Israeli occupation government, published a video of Sheikh Hamed’s fatwa.

Hamid began his fatwa by criticizing a previous fatwa of the Islamic Fiqh Academy in Sudan, stating that the issue of normalization is forbidden, indicating that the matter is a matter of legal policy, and has nothing to do with faith.

Hamed said that the principle of loyalty and disavowal, upon which the Council based its fatwa, is specific to religion and not politics. The issue of normalization “is a matter of peace and the declaration of war.”

Hamid emphasized that the person entrusted with making peace or declaring war is the ruler, adding that “if the ruler sees weakness in Muslims and sees an interest in concluding peace, then he must do so in order to preserve the Muslims, as inferred by the Prophet’s action.”

Hamid concluded his speech with the necessity for religious scholars to read the reality, so that the jurisprudential judgment is consistent with it.

On September 23, the head of the Sovereignty Council, Abdel Fattah Al-Burhan, said that his discussions with US officials, during his visit to the Emirates, dealt with several issues, including “Arab peace” with Israel and bilateral relations.

At the time, Israeli and American media reports stated that Khartoum agreed to normalize its relations with Tel Aviv, in the event that Sudan was removed from the list of “states sponsoring terrorism” and that it obtained billions of dollars in US aid.

On October 6, 2017, the administration of US President Donald Trump lifted the economic sanctions and a trade embargo imposed on Sudan since 1997.

But Washington did not remove his name from the “terrorist list”, which it had been on since 1993, for hosting the late leader of Al-Qaeda, Osama bin Laden.

Sudanese political forces announced their categorical rejection of normalization, amid talk of a possible Sudanese normalization after the UAE and Bahrain, which joined Jordan and Egypt, which are bound by two peace agreements with Tel Aviv in 1994 and 1979 respectively.

Sudanese activist Omar al-Khadad wondered about the reason for the emergence of a Sudanese fatwa permitting normalization in the Emirati and Israeli media, without appearing in the Sudanese media, referring to the practice of what he described as internal and external pressures to issue this fatwa.

Activist Abdullah said that they choose the fatwa that suits them, in reference to supporters of normalization with Israel.

While Abir said, “Do you know God about your religion, O ignorant one? There is no reconciliation with the killers of the prophets and the thieves of war who cause hunger, poverty and fear, the aggressors of our Al-Aqsa Mosque.”

These were the details of the news “A Sudanese Mufti” permits normalization with Israel … and Tel Aviv... for this day. We hope that we have succeeded by giving you the full details and information. To follow all our news, you can subscribe to the alerts system or to one of our different systems to provide you with all that is new.